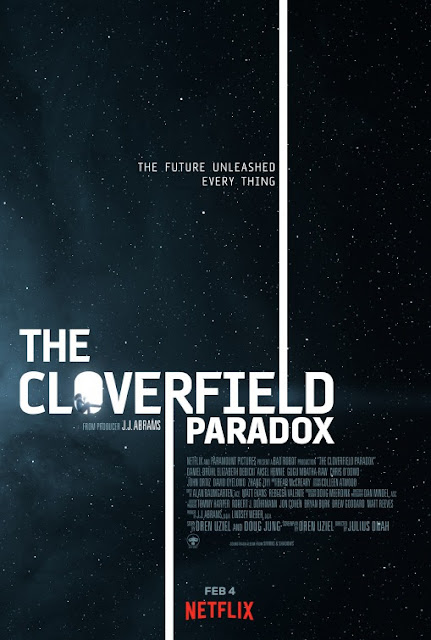 For the longest time, third movies were considered to be the place where movie franchises hit their creative low, likely inspired by how Return of The Jedi was considered such a step down from its predecessor back in the early 1980's and not helped by early 21st century third entries in blockbuster franchises like Spider-Man 3, Shrek The Third and X-Men: The Last Stand. Of course, this is a silly misconception on the most basic level, third movies in a series aren't inherently going to be worse than any other type of movie, it's the elements you use to tell that third movie that matter. Of course, those who believe third movies are destined to be the nadir of their respective franchises will have a new go-to example to utilize for their arguments with the release of The Cloverfield Paradox.

The third entry in the Cloverfield franchise follows Ava Hamilton (Gugu Mbatha-Raw) as she works with a crew of mechanics, scientists and astronauts on the Cloverfield Station (yes, for the first time in this series, the word Cloverfield actually factors into the plot beyond just being scribbled on a mailbox) to work a particle accelerator, with the hope being that this device can help find a fuel source for the population of the planet Earth which is falling into chaos as fuel supplies run low. When the crew actually manage to get the particle accelerator to work, they discover an odd occurrence: Earth itself has vanished. The planet they were looking to save has disappeared before their very eyes.

It isn't long before the crew surmises that they've landed in an alternate dimension and now the hope is to get the space station repaired enough so that they can fire up the particle accelerator again in the hopes that it'll send them back home. However. a bunch of strange occurrences begin transpiring across the space station though as this alternate dimension adjusts to the presence of newcomers from another plane of reality. Writing it up in this review, the plot of The Cloverfield Paradox is as overly dense to describe as it is to watch, with the script by Oren Uziel being the real daunting threat that this movie and its characters can't quite vanquish.

The best parts of The Cloverfield Paradox are where it takes a cue from its predecessor in terms of handling its main character plight. In the last two Cloverfield movies, a heightened science-fiction premise was a backdrop for an intimate personal struggle a normal human being was going through. Happily, The Cloverfield Paradox has a great concept for how it's lead character, Ava, can carry on this tradition. Ava, it turns out, is constantly haunted by the past as she feels responsible for the house fire that resulted in the death of her two children. While spending time in this alternate universe, she discovers that those children of hers are alive and well in this universe, making her question whether she actually wants to go home or not.

This is by far the most interesting way The Cloverfield Paradox utilizes that alternate dimension conceit and it ties in nicely with an overarching theme of holding onto hope in times of dire tragedy. Even an otherwise disposable human villain in the climax (that plot point totally feels like a forced way to generate unnecessary tension in a situation already rife with tension) at least ties nicely into Ava's personal struggle as this foe is also having their actions motivated by the loss of people near and dear to their heart. The contrasting ways people grapple with loss is an intriguing one that feels like a plenty clever way to provide emotional grounding for this story, but unfortunately, it's a thematic detail that ends up being more interesting in conceit than how it's actually executed in the story properly.

However, the problem with The Cloverfield Paradox is that it takes forever for that personal character struggle to get revealed. It isn't until halfway through the movie that we get this backstory revealed for Ava. Up to that point, the immense talents of Gugu Mbatha-Raw have been utterly wasted as Ava just reacts to a bunch of weird cosmic horror antics occuring on the space station. Now we come to where this film really goes haywire, it's just not able to make its character-oriented facets and the more heightened science-fiction aspects of its premise co-exist peacefully. Sometimes, The Cloverfield Paradox comes off like a modern-day filming of a script for an Alien knock-off penned in 1980, other times it wants to be a slow burn character-driven thriller like the last two Cloverfield movies.

Neither atmosphere is able to flourish properly, with Ava's internal struggle being basically absent for the first half of the story while the various space horror shenanigans aren't all that interesting or even memorably gross (the lack of blood and the use of a single F-bomb makes it clear this was meant to be a PG-13 movie when it was planned to be a theatrical release), though Chris O'Dowd at least gets some chuckles out of his reactions to serious injuries he incurs during the course of the story. An awkward B-plot involving Ava's Earth-bound boyfriend is yet another major narrative hiccup since it's entirely disconnected from the actions of the characters on the Cloverfield station and undercuts tension over whether or not Earth has really been wiped out.

The Cloverfield Paradox is a total narrative mess, leaving a whole cast of talented actors left stranded looking for anything to do. Gugu Mbatha-Raw excels when she's actually given something of substance to say or do, but too often she's stuck as a simply an observer to cosmic chaos. Poor David Oyelowo is thoroughly wasted in his forgettable role and the same goes for extraneous cannon fodder characters played by John Oritz and Zhang Ziyi. At least Daniel Bruhl gets to play a good guy for once, that's at least novel! All of these underwhelming traits are capped off on a final shot meant to directly tie this into the first Cloverfield movie that's incredibly lazy, sloppy and all other synonyms you can think of for those two words. What a stupid bit of forced world-building that ends an already slapdash feature on such a bad note.
Posted by Douglas Laman (NerdInTheBasement) at 10:33 AM