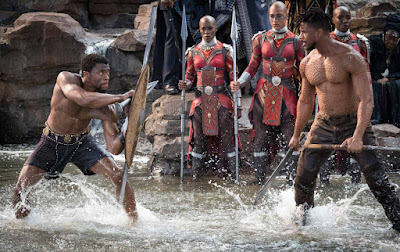 Those thinking Black Panther would be a one-week wonder were proved wrong as the King of Wakanda continued to excel at the box office. Grossing $108 million this weekend, a small 46% drop from last weekend, the smallest second-weekend decline ever for a Marvel Cinematic Universe movie, beating out the 47% drop of the first Thor movie for that honor. Grossing $400 million in ten days, this title is the third fastest movie to ever gross $400 million domestically, only Star Wars: The Force Awakens and Jurassic World crossed that mark faster. It's apparent now that Black Panther is an outright box office phenomenon and it's going to be fascinating to see just how much it grosses in the next month. A domestic gross of at least $600 million, at the bare minimum, feels like a guarantee.

Opening in the wake of Black Panther was Game Night, which grossed $16.6 million this weekend. For Jason Bateman, that's an opening on par with the $16.8 million bow of his last comedy vehicle, Office Christmas Party. Game Night was likely kept from hitting much higher due to a marketing campaign that played things too closely to the chest (there was no clear antagonist in posters and trailers) and that $37 million budget looms large over the project, but this is still an alright debut for an original comedy that likely got a boost due to the lack of other comedies in the marketplace.

Holding quite well this weekend was Peter Rabbit, which grossed another $12.5 million this weekend, only a 28% dip from last weekend, a much better post-President's Day weekend drop than The LEGO Movie (37%) and The SpongeBob Movie: Sponge Out Of Water (47%). With $71.2 million in 17 days, if Peter Rabbit can hold well over the next few weeks, it's likely this title will end up cracking the $100 million mark which would make it only the sixth Sony Pictures Animation title to do just that.

In fourth place we have Annihilation, the $40 million budgeted science-fiction project that grossed only $11 million this weekend. That's down from the opening weekends of Life ($12.5 million), CHAPPiE ($13.3 million) and only narrowly ahead of the bow of Transcendence ($10.8 million) among other recent original science-fiction projects that debuted in the first four months of any given year. Paramount Pictures seems to have given up the on the project quite early on between them selling the film to Netflix in all territories except for the United States and China, a smaller marketing campaign (Paramount loves advertising movies during the Super Bowl so it was shocking to see Annihilation not get an ad during that big game) and even a reduced theater count of only 2,012 locations that at least gave the film a decent per-theater average sum. Selling the movie off to Netflix likely minimized Paramount's financial risk on this project but this is still a middling bow.

Going down 60% this weekend was Fifty Shades Freed, which grossed $6.9 million for a current domestic total of $89.5 million. Looks like this one will become only the second 2018 movie to cross $100 million domestically. Inching closer and closer to $400 million domestically was Jumanji: Welcome To The Jungle, which went down 29% to gross another $5.6 million giving it a massive domestic total of $387.2 million. Meanwhile, The 15:17 To Paris went down 52% for another $3.6 million, bringing its domestic gross to $32.2 million. For the first time ever, The Greatest Showman dropped over 25% from weekend-to-weekend as it dropped 32% this weekend to gross another $3.4 million for a gargantuan domestic total of $160.7 million.

MGM re-launches as a standalone studio this weekend with Death Wish, but it's first venture as a stand-alone distribution service technically came this past weekend as they relaunched Orion Pictures as a micro-budget movie division with Every Day, a YA-novel adaptation that grossed $3.1 million at 1,667 theaters for a per-theater average of $1,862. The financial risk here is minimal given the scaled-back marketing campaign and the movie's budget being only $4.9 million, but given how MGM has found serious success with YA-novel adaptations like Me Before You in recent years, I'm sure they had higher hopes for this title.

Rounding out the top ten was Early Man, which grossed another $1.7 million, a 46% drop from last weekend, for a domestic gross of only $6.7 million. It appears this will be the first Aardman title to gross under $10 million domestically. Three Billboards Outside Ebbing, Missouri has held quite well at the box office in the past few weeks and this weekend it did so again having it's second-smallest second-weekend decline ever as it dipped only 19% to gross another $1.2 million, taking it to $50.1 million, making it only the tenth movie ever from Fox Searchlight to gross over $50 million. Fellow Best Picture nominee The Post dropped 39% this frame for another $1.2 million for a $78.8 million domestic haul while The Shape of Water was right behind it with $1.1 million, bringing that Guillermo Del Toro project to a $55.3 million domestic gross.

The Top 12 movies this weekend grossed a total of $174.9 million, the biggest eighth weekend in any given year. February 2018 has grossed $944.1 million to date, already making it the biggest February in history. Can this month make an additional $55.9 million in the next three days and make this the first February in history to gross over $1 billion? We shall see....
Posted by Douglas Laman (NerdInTheBasement) at 11:17 AM