Liam Neeson's Newest Thriller Is Best When It's Restrained 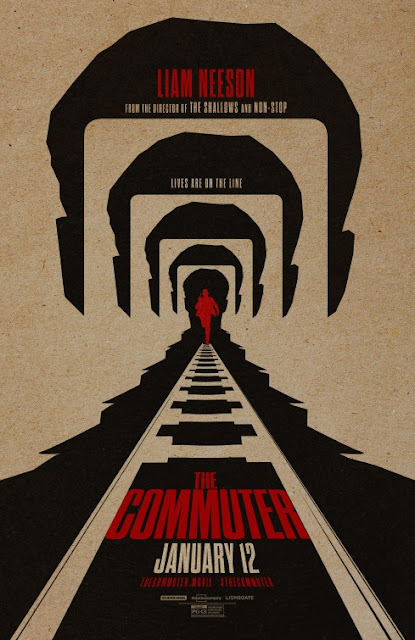 Michael MacCauley (Liam Neeson), the lead character of the thriller The Commuter, is a man of routine. Each day, he gets up to the tune of his alarm clock blaring a local radio station and then he's off to get himself ready for the day ahead. Some chit-chat with his son (who's headed off to college in the Fall) and his wife, Karne (Elizabeth McGovern) before he goes off to the train ride he takes to work. He does his eight-ish hours at work then it's back on the train to take him home. Day in, day out, this is his routine and it's one that's realized in a well-edited opening montage demonstrating both how long Michael has been going through this daily regimen and that Michael has a good relationship with both his wife and son.

On a seemingly normal day, that routine gets upended when he's abruptly fired from his long-time job. Not sure how to tell his wife this news considering the precarious financial situation they're in (college doesn't come cheap), Michael enters his train ride home in a daze that's briefly broken by the presence of a chatty person named Joanna (Vera Farmiga). Their seemingly ordinary small talk reveals itself to be more precarious than that as Joanna reveals she has money left in a bathroom stall for Michael that he can take only if he puts a tracking device on a specific passenger on the train. Who is this passenger? That's up for Michael to figure out. The clock is ticking and Michael is now way in over his head with very little answers to help guide him to who is his target, his ally or his enemy on this train.

Jaume Collet-Serra does his fourth action/thriller collaboration with Liam Neeson here with their latest effort leaning more heavily towards the thriller elements than their last three movies. Collet-Serra also utilizes another trait from two other films in his filmography, Non-Stop (hey, that was a Neeson joint!) and The Shallows, in how he sets an entire thriller in one confined location. It's a move that seems to evoke Hitchcock thrillers like Rear Window that used a limited amount of locations to heighten the suspense, and while Collet-Serra is no Hitchcock (who is?), he proves to work fine with utilizing a finite amount of space wisely.

The tight surroundings that the screenplay (credited to three different writers) drops Liam Neeson's lead character into provide a number of opportunities for fun sequences depicting Neeson trying to figure out which of these passengers could possibly be who he's looking for. Speaking of Neeson's character, making this guy explicitly an everyman is a clever decision since it helps make the film more enjoyably intense to watch. Michael is no crafty all-seeing action hero, the guy sweats profusely and carries obvious bruises from scrapes he gets into on the train. Plus, it's nice that he's shown as having a fine relationship with his wife and son, that's a nice departure from typical thrillers that feel the need to give their lead characters excessive baggage from their home life to carry with them on their adventure.

Neeson playing an average Joe works well enough that it's a pity that The Commuter feels the need to make recurring departures from it's more restrained aesthetic to make room for more conventional antics depicting Neeson as a bad-ass. Watching Neeson in a cramped train trying to figure out what the hell is going on under the influence of a ticking clock is way more entertaining than forced shenanigans like a scene mid-way through the movie showing Neeson trying to get back on the train. Even more egregious is a CGI filled and explosion heavy third act sequence that feels like it comes from a whole different movie. A feature like Rear Window didn't cap off it's story with wheelchair-bound Jimmy Stewart out-chasing bad guys in a high-speed car chase for a reason.

If only The Commuter could have trusted that it's small-scale thrills more, because Jaume Collet-Serra really does have a knack for making nicely-crafted thrillers that make the most out of very little. But there's just enough working in here to keep The Commuter chugging along, even if it keeps wobbling on the tracks thanks to an inconsistent script that really gets lackluster in it's third act (there's a final character reveal in this section of the story meant to be a momentous twist that's ends up being thoroughly predictable). In the pantheon of Liam Neeson thrillers helmed by Jaume Collet-Serra, it's not as good as Non-Stop but it's better than Unknown, which is a sentence that will make total sense to other Liam Neeson devotees and read as gibberish to everyone else.
Posted by Douglas Laman (NerdInTheBasement) at 10:37 AM