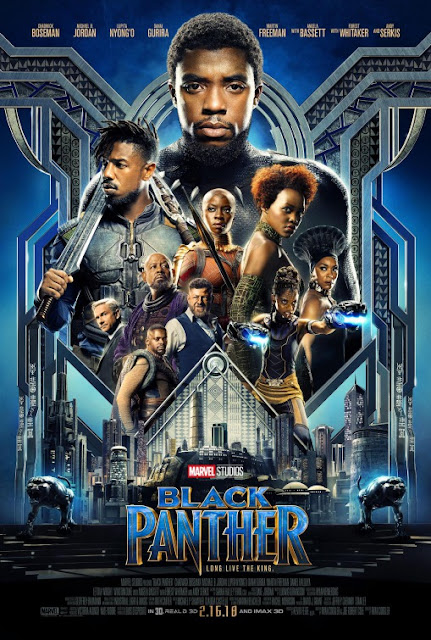 Back in 2013, I had two separate screenings of then-new theatrical movies that introduced me to talent I'd never seen before. One of these films was 42, the first starring role for Chadwick Boseman, while the other motion picture in question was Fruitvale Station, the feature film directorial debut of Ryan Coogler. Boseman immediately stepped onto my radar with his performance as Jackie Robinson while Coogler showed an adept hand at depicting everyday life brought to a tragically early end in his inaugural directorial effort. Leaving both individual movies, I hoped I would see further work from both Boseman and Coogler in the near future.


Five years later, the two have paired up for the first time for the blockbuster Black Panther, a highly anticipated feature bringing much-needed racial diversity, both in front of and behind the camera, to the American blockbuster scene. Though it's the eighteenth motion picture in the sprawling Marvel Cinematic Universe, Ryan Coogler's newest movie feels like it's own creature straight from the get-go as the audience is introduced to Wakanda, an isolated African nation full of highly advanced technology and hidden away from the rest of the world. Now that his father has been murdered, T'Challa (Chadwick Boseman) is now the one who must take up the title of King of Wakanda. It is a massively important day, one that puts him in control of an incredibly powerful nation that now turns to this young understandably daunted man for leadership.

Just as he takes on the title of King, T'Challa, with the aid of his head bodyguard Okoye (Danai Gurira), younger sister Shuri (Letitia Wright) and Wakandan spy/former lover Nakia (Lupita Nyong'o) have to deal with a pair of villains who have incredibly dangerous plans for Wakanda. You've got the eccentric Ulysses Klaue (Andy Serkis), a one-armed weapons dealer angling for some revenge, as well as the American soldier Erik Kilmonger (Michael B. Jordan). This is tale is frequently told like an espionage thriller with more than a few hints of James Bond thrown into the mix, but the best part of Black Panther feels so much like it's own thing. As said before, this is a movie unlike any other in the MCU and also very much separate from the conventional American blockbuster.

An early sequence depicting T'Challa's coronation that has countless characters adorned in beautiful looking garbs clearly taking cues from a variety of classic African fashion influences (Ruth E. Carter is the costume designer responsible for such wonderful looking attire) makes it clear that this is a motion picture that will clearly carry its own unique visual style stemming from how deeply it keeps in touch with African culture. Instead of just using such pieces of African-inspired fashion as set dressing as other blockbusters might, Black Panther puts the costumes by Ruth E. Carter front and center in the frame while also making sure that it's various Wakandan sets have a similar visual style that gives the land of Wakanda transfixing one-of-a-kind aesthetic.

The characters that inhabit the costumes and sets are somehow even more transfixing. There's much to be praised to the high heavens in Black Panther, but perhaps best of all is how its script by Ryan Coogler and Joe Robert Cole actually does dive into compelling sociopolitical deriving from Wakanda's isolated nature. The supporting characters each get to have their own distinct perspective that feels earned, it's truly fascinating to see these dueling viewpoints combat each other throughout the film. Without getting into spoilers, I'll simply also note that Black Panther's eventual primary internal moral quandary in the film is utterly brilliant and makes the proceedings all the more morally complex. Similarly fascinating is how Black Panther manages to very much exist in the real world by referencing actual hardships faced by African-Americans in the past and present. A prologue sequence set in Oakland, California in 1992 establishes that Black Panther won't be a movie shying away from real-life issues and repeated references to entities like colonialism reinforce that fascinating facet of the feature.

Like many of the best blockbusters, Black Panther seamlessly merges thoughtful social commentary and enjoyable commentary. Ryan Coogler and cinematographer Rachel Morrison, pairing up again after they delivered dynamite boxing fight sequences in Creed, deliver some great action scenes that get a lot of mileage out of not just concentrating on its titular superhero. Okoye is especially exciting to watch in her various fight scenes while Black Panther himself is an agile treat to watch taking out baddies and even vehicles in times of combat. The well-realized character work is, thankfully, alive and well throughout the various action scenes, especially in a climactic duel that gets a lot of heavily cathartic moments derived from just how much one grows to care about the various denizens of Wakanda.

Those denizens are played by a top-notch group of actors whose combined talents ensure there isn't a dud in the cast. Chadwick Boseman has the kind of immediately palpable on-screen charisma that all the best movie stars are made out of, Lupita Nyong'o gets to shine in a role that gives her more to do than be a love interest while Danai Gurira immediately established herself to this guy who's never seen The Walking Dead as an acting force to be reckoned with. Michael B. Jordan provides what may seriously be one of the best comic book villains ever in Erik Kilmonger and it feels worth mentioning that making this the rare superhero movie where the villain is explicitly younger than the hero gives the movie Black Panther a unique hero/villain dynamic that Michael B. Jordan excels in. Meanwhile, two actors making their first major theatrical film roles manage to steal the entire movie, the first of them being Winston Duke as the utterly charming M'Baku while Letitia Wright as Shuri is the highlight of every scene she appears in, she's an absolute delight that Wright plays wonderfully.

The cast and screenplay merge to create a cast of characters who are incredibly captivating human beings whose world thoroughly enraptured me. The realm of Wakanda is capable of generating some incredibly fun spectacle (wait until you see what animals get to play a crucial role in the climactic battle!), but what I found even more enthralling was its ability to serve as a springboard for interesting dissections of themes like isolation vs. internationalism. Comic book movies have been heady in the past but few have tackled such thought-provoking ideas with such depth as Black Panther. The talents I saw in Chadwick Boseman and Ryan Coogler five years ago, as well as the assorted talents of the massive cast & crew of this movie, are well on display here in Black Panther, which I will venture to dub is the best Marvel Cinematic Universe movie yet and also a phenomenal piece of cinema in it's own right.
Posted by Douglas Laman (NerdInTheBasement) at 12:03 PM