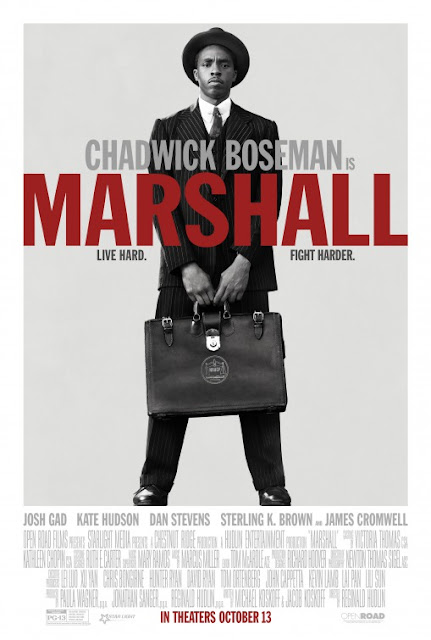 Thurgood Marshall, the first African-American Supreme Court Justice, finally got a biopic movie to headline. Instead of chronicling him being chosen for the Supreme Court, the movie Marshall concentrates on a 1940 court case that Thurgood Marshall (played by Chadwick Boseman here) served as a lawyer in. This court case involved Joseph Spell (Sterling K. Brown) being accused of raping a wealthy socialite, Elanor Strubing (Kate Hudson), a court case that seems to have the odds stacked against it, especially when Marshall, being an out of state lawyer dispatched by the NAACP, is forbidden from speaking during the trial, leaving all the in-court defense to Sam Friedman (Josh Gad).


The odds are stacked, but let it never be said that Thurgood Marshall let an imposing situation tower over him. It should be noted that this court is presided over by a judge played by James Cromwell while Strubing is defended by a lawyer portrayed by Dan Stevens. That's quite a cast Marshall's managed to assemble for both a screenplay and a visual aesthetic belonging more to a cable TV movie on the USA Network from a decade ago. The likes of Chadwick Boseman and Sterling K. Brown work overtime to use their immense talents as actors properly in a film that doesn't quite become as insightful as it could have been.

Michael Kosoff and Jacob Kosoff's screenplay isn't exactly bad, it just frequently wastes too much screentime on broad unfunny jokes (woah, Josh Gad's shoes got muddy!) and poorly written dialogue. The few times the feature really gets interesting are in more restrained sequences, like Marshall telling Spell about how African-Americans now have the law on their side to protect them or Spell recounting the actual events of what happened between him and Strubing to the jury. These type of scenes have a more insightful vibe to them (as does the eventualy true motivation for Strubing's actions, which serves as an interesting examination of intersecting societal persecution) that I dearly wish more of the film had taken a cue from tonally.

Even with a script that has trouble finding it's footing, Chadwick Boseman still makes a fine choice for Thurgood Marshall as Boseman radiates natural confidence and wit whenever he comes on-screen. Sterling K. Brown is stuck just being silent behind a desk for too much of the movie but when he does get the chance to shine, boy does he ever shine! Josh Gad is an interesting choice for Sam Friedman and Murder On The Orient Express that he can blend into a serious movie setting and not stand out like a sore thumb, but he doesn't fully work in the role as executed here, though admittedly not for a lack of trying on Gad's part.

The actors are all wandering around sets that always look too artficial, maybe because the vast majority of these sets are lit by overly bright lighting that has a tendency to give sequences intended to have real dramatic power instead have their intendedp ower mitigated by cheap-looking production values. It feels like a real shame that Marshall comes up so short in such crucial departments because there are good performances here and some interesting ideas nestled into the script. The life of Thurgood Marshall is one rife with events just begging for a cinematic adaptation, but hopefully future movie adaptations of such events are more consistent in quality than the mixed bag that is Marshall.
Posted by Douglas Laman (NerdInTheBasement) at 11:12 AM