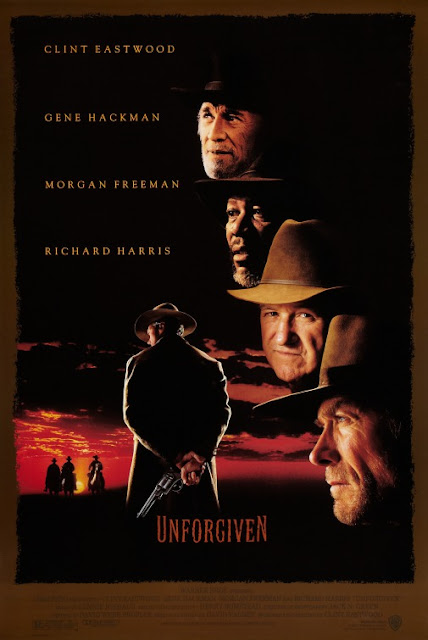 James Mangold and Hugh Jackman have cited many movies that carried a large influence over the creation of their 2017 X-Men feature Logan and it's no surprise to hear that Unforgiven was one particular movie Jackman saw as a guiding light for that final Wolverine movie (The Wrestler was another, similar unsurprising, point of inspiration for Jackman). Both Unforgiven and Logan star actors who play older weary versions of iconic stock characters they became famous for playing inhabiting a more realistic world low on hope and high on danger. Because Logan is dealing with an ex-superhero, the movie is able to end, after an entire film of bleak nastiness, on a note of hopefulness that the heroics Logan once committed will inspire a new generation to rise up and become beacons of hope in their own right.

For Unforgiven, the gutsy decision has been made to make Clint Eastwood's lead character Will Munny a former assassin who would slaughter men, women, and children without remorse so long as there was some money waiting for him at the end of such gruesome assignments. Thankfully, Will eventually marries a woman who is able to help him conquer his demons. Abstaining from violence and drinking entirely, Will now lives out a quiet life as a farmer even after his wife passes away. This is a man content to sit out his remaining days just taking care of his children and the animals on their farm. Course, that was all before The Schofield Kid (Jaimz Woolvett) showed up and asked for Will's assistance in taking down two wanted men who cut up a prostitute.

Will reluctantly decides to help this kid in his work with the help of Will's old friend Ned Logan (Morgan Freeman). Off they go on a quest that has the basic plot points of a conventional happy-go-lucky Western (a quest for vengeance, cowboys going out for one last mission, etc.) but then filters them in a more realistic manner. Fight scenes in Unforgiven, for instance, are more brutal than exciting, as each kick, punch and tear a human being delivers to their fellow man ends up resulting in visible gruesome injuries. Even the eventual deaths of the nefarious villains aren't played like a triumphant victory, with one of these foes shown wailing for water in his final moments of life in a truly haunting manner.

The true villain of the piece even reflects the screenplay's (penned by David Webb Peoples) desire to create something hewing closer to reality than past classic Westerns in tone and style. Sheriff Bill Daggett (Gene Hackman) is a ruthless individual who forbids guns of any kind in his town and seeks to keep the peace in his town, but he does so by being a vicious man capable of dishing out gruesome violence that ends up making him as sadistic of a person as the assassins he looks to ensure have no place in his town. In Unforgiven, villainy comes from figures of authority using their power for wicked tyranny robbing people of their humanity instead of deriving from generic outlaws.

Filtering a genre of storytelling typically known for dealing with broad caricatures through a realistic prism has become a go-to mechanism for storytelling in the decade since The Dark Knight and frequently the results are lackluster enough to show that "simplified" characters end up being more entertaining to watch than a bunch of "brooding" loners acting out shallow definitions of what it means to be adult. Luckily, Unforgiven is a more meditative piece of cinema that has more on its mind than just doing a darker version of a classic Western, though that part of the production does work well too thanks to the incorporation of small details like how Will notes that he used to treat animals horrible does show a remarkable attention to what kind of details tended to crop up in classic Westerns.

In addition to working well with applying a darker to a typical Western, Unforgiven also excels in exuding a distinctive melancholy ambiance that's sold convincingly by an older Clint Eastwood. Though Eastwood has trouble selling some of his lines early on in the story (his repeated use of "Dearly Departed Wife" just sounds too verbose in his delivery), scenes like the iconic "It's a hell of a thing to kill a man" monologue show that he was perfect for the role here. Eastwood also works as the director of the project as he attempts to give this project it's own distinct visual look beyond just channeling those iconic wide shots in vintage John Ford Westerns (which do get referenced in the memorable opening and closing shots of the movie).

In setting out to accomplish that goal, Eastwood relies heavily on darkness, frequently in the form of shadows, to reinforce the grim tone of the project, there aren't really attempts to give the film a grandiose sheen that could lend a sense of mythicness to what's very much a story about recognizing the real people inside tales of legend. In addition to giving a good performance in his own right, Eastwood also commands strong work out of veteran actors like Morgan Freeman and Gene Hackman, each of whom brings to the table their own form of realistic weariness for their characters. Given how omnipresent that element of weariness is here, it may be surprising to hear that Unforgiven ends up being quite entertaining, but Clint Eastwood deconstructing his own Western icon image proves to be incredibly entertaining to watch.
Posted by Douglas Laman (NerdInTheBasement) at 12:08 PM