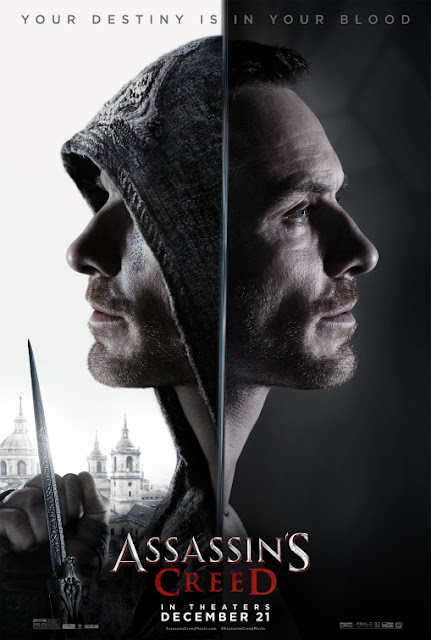 2016 was actually a pretty strong year for cinema as a whole, but good Lord, it was an outright disaster when it came to video game movies, a subgenre that just can't catch a break. The Angry Birds Movie may have made coin at the box office (a rare occurrence for a video game movie) but it was absolute garbage while Warcraft was a shockingly low-quality and borderline incoherent effort from a director as good as Duncan Jones. I didn't even see that Ratchet & Clank movie that came and went in a flash in April 2016, but word-of-mouth on it was dismal and I've encountered people who actually saw it who scarcely can believe it actually came out as recently as just this past Spring.

The final nail in the coffin for video game movies in 2016 comes in the form of Assassin's Creed, a movie with better production values than many of its kin but still carries the same o'l dismal quality that's been plaguing video game movies for their entire existence. While I am personally not familiar with the Assassin's Creed video games, it appears that the film adaptation eschews any previously existing protagonists from the games in favor of a newly created personality named Callum Lynch (Michael Fassbender), an imprisoned murderer sentenced to death. While his death sentence is being carried out, Callum closes his eyes, preparing himself for his demise...and wakes up in a bed in a laboratory that is his new permanent home.

It is here that Calum learns that in his bloodline is an assassin who, centuries prior, knew of the location of a mystical object called The Apple Of Eden. Scientist Sofia (Marion Cotillard, for some reason stooping to this level of filmmaking after harrowing projects like The Immigrant) and her father Rikkin (a sleepy Jeremy Irons) want to find the location of The Apple Of Eden by way of putting Callum into a machine called the Animus that'll allow Callum to relive the memories of his assassin ancestor and discover where The Apple Of Eden is. It's all a really contrived way to get Fassbender in a period era setting fighting bad guys with swords and what not.

Truth be told, the action sequences taking place in the past are the highlight of the movie all things considered. They take up maybe a tenth of the overall story, so they don't have much impact, and a sequence where dueling assassin's fight on a horse carriage has some laughably bad green-screen effects, but at least these segments of Assassin's Creed have their own unique vibe and cohesively shot action. But like I said, barely anything in the movie is centered on these at least agreeable action sequences. For some reason, the foolhardy decision has been to made to spend about 90% or so of the story in the present which is where the movie really just fumbles beyond belief.

Every character in this story is a big fat waste of time, especially the lead character of Callum Lynch, who starts out as an aggressive murderer and ends as....an aggressive murderer. Michael Fassbender, one of the best actors of this generation, is embarrassingly wasted as he swings about in unintentionally hilarious fashion in the Animus fighting at and leaping on holographic objects.  By the way, if you think that clunky description of what the Animus does would make more sense in the film itself, you're out of luck. Very little about the Animus as its presented in the movie makes all that much sense and there's a similar sense of incoherency surrounding everything in the story. Why is Callum's estranged father (played by Brendan Gleeson and, wow, is there no talented actor this crap won't waste horribly?) at this compound beyond just delivering exposition in a bland manner? Why is it such a shock in one of the final scenes of the movie to Marion Cottilard (whose playing a supposedly super-smart scientist lest we forget) that her father is really a bad guy when the audience has known that for the entire movie since he wants to gain possession of a mystical MacGuffin that would remove free will from all humans?

For that matter, why am I supposed to give a damn about these other individuals related to ancient assassins that are also at the compound when they fight alongside Callum in the climax? Why does that damn hawk keep showing up? All these questions and more will not be answered in the plodding mess that is Assassin's Creed, a movie whose script is about as embarrassing as its production aesthetic which is limited to generic glass-dominated laboratories in the modern-day settings that could belong to any other movie. There's a similar lack of variety in the way action is shot; it's competently made more often than ot but all of the various assassin's and their foes engage in the same type of fighting style that just gets really old almostimmediatelyy. If you've come to Assassin's Creed for anything else beyond Michael Fassbender's awesome abs (yes, he is shirtless for much of the third act, thank heaven for small favors), particularly if you've come for any sort of fun or escapism, you're fresh out of luck. Looks like the terrible Assassin's Creed is one helluva Game Over moment for video game movies in 2016.
Posted by Douglas Laman (NerdInTheBasement) at 11:43 AM