Sing Street Is A Euphoric Ode To The Power Of Music 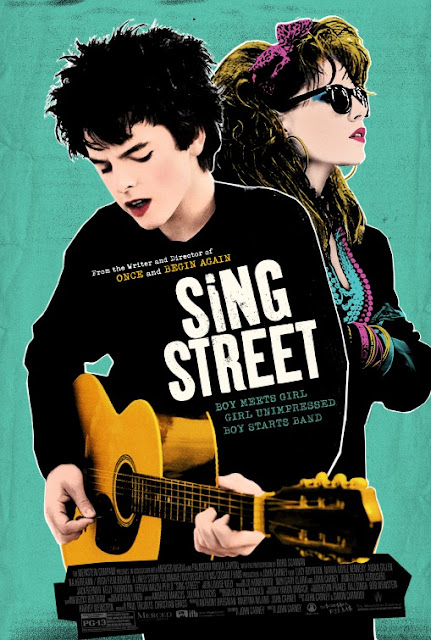 It's been a pretty rough year for sure, no denying that. Like, I've had enough personal problems this year to fill up a whole silo, adding in all the real life tragedies and political turmoil happening in our country and it's easy to see why this year has been such a chaotic spiral of despair. So if you're looking for something peppy, something with a kind spirit or something just to make you feel good, allow me to introduce you to John Carney's Sing Street, one of the unsung (see what I did there??) gems of 2016 that's all but certain to put a spring in anyone's step and not just because of the awesome soundtrack!

The year is 1985 in Dublin, Ireland and things aren't going so swell for Conor "Cosmo" Lalor (Ferdia Walsh-Peelo). His parents can't stop arguing and seem destined for a divorce, his new school is full of strict rules, not exactly a tip-top life. But a chance encounter with a girl named Raphina (Lucy Boynton) ends with him lying about being in a band solely so he can have an excuse to see her again. Now he's gotta cobble together a band with his young pals, a band that goes from being an excuse to impress a lady to something far more important to their lives.

A coming of age story told through the prism of music may not sound like the most novel concept to base a movie around, but the ingenious thing with Sing Street is how it uses the ubiquity of its premise to tap into universal teenager emotions surrounding the both thrilling and daunting prospect of having your life ahead of you. Sing Street realizes just how much music and good friends can help cope with those kind of emotions and that's the kind understanding that make this movie just so emotionally thrilling to watch. It's a sweet film that loves its numerous characters about as much as it loves a good rocking tune, and Sing Street absolutely adores a good rocking tune, for the record!

All of the numerous songs are good too, fitting right into the 1980's musical aesthetic and being just good tunes in their own right, particularly the song Drive It Like You Stole It, a peppy anthem that'll have you tapping your toes immediately. It's pretty apparent that Carney (who would have been just two years younger than the protagonist in 1985) has a strong devotion to not only music of this time period but also knows how to tap into that intense desire for independence and charting one's course that are a part of everyone's teenage years. Quite of the few of the biggest musical hits of this decade align right with that feeling which only further shows how appropriate this time period is for this particular story being told.

Something else that can be said for director John Carney after seeing this movie is that he's got a good handle on younger actors, with Ferida Walsh-Peelo and Lucy Boynton being excellent finds in the lead roles. And who the hell knew that Jack Reynor, the guy who was rambling on about the Romeo & Juliet laws in Trans4mers, would turn out to be such a good actor? He plays the older brother of Cosmo in Sing Street and he manages to both be a humorous teacher for the young wannabe singer and someone with unmistakable tragedy in his life. His breakdown scene near the end of the movie is extremely well-handled and shows Reynor has quite a bit of talent that I hope to to see properly utilized in the years ahead.

Above all else, Sing Street deserves to have its praises sung (oh man, I just cannot stop with the musical puns today!) for being such a well-made movie that thrives on kindness and hope. It doesn't do these elements at the expense of reality, but that's why the happier elements of the story work so well. Because plot details like Cosmo's parents turmoil are depicted in such a darker true-to-life fashion, it makes his moments of joy in the world of music all the more powerful to watch. Sing Street knows how terrible life can be but it also knows how good music has the power to make things just a little bit better.
Posted by Douglas Laman (NerdInTheBasement) at 11:19 AM