Office Christmas Party Is A Big Waste In Every Respect 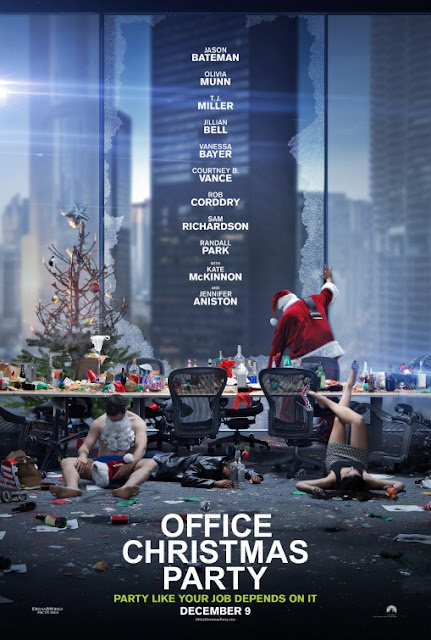 Simply by the virtue of having so many strong comedic actors in one place at one time, you'd think Office Christmas Party would have to at least be mildly amusing right? You've got some strong Saturday Night Live cast members (Kate McKinnon and the underrated Vanessa Bayer), up-and-coming actors (Jamie Chung, Sam Richardson and Karan Soni) and some established veterans of the comedy world (Jason Bateman and T.J. Miller) all trying to pull off a raunchy Yuletide-themed party. Shouldn't that be enough to generate an at least agreeable comedy?

Nope, not at all. Actually, Office Christmas Party is more of a tragedy than a comedy since a potentially fun premise and great cast get wasted on a dismal script that never does anything with the great elements its got at its disposal. As the title subtly implies, Office Christmas Party is about well, an Office Christmas Party, one being put on by Josh Parker (Jason Bateman), Clay Vanstone (T.J. Miller) and Tracy Hughes (Olivia Munn) in order to woo a super important client, Walter Davis (Courtney B. Vance) who could save their company and, by proxy, their jobs. The party soon gets out of control and personal dilemmas crop up and boy howdy, this movie is just so unfunny and rote it hurts.

It's pretty clear that Office Christmas Party, just as an inherent concept, should be more of a Dazed & Confused type affair, a laidback movie that has an easygoing flow to it with natural dialogue and fun characters. Instead, Office Christmas Party in its final form is an oddly convoluted movie that introduces way too many characters (few of whom actually have an impact on the story or are funny enough to justify their presence) to the detriment of any potential laughs or character-building. For a movie all about letting loose and having a good time, the stories rigidly set up to squash any sort of narrative spontaneity.

For proof of this, look no further than a late second act moment where it's revealed that Josh was offered a job at a new company that's supposed to divide former best buds John and Clay. Except...Josh didn't do anything wrong, he never took the job proper. It's just a stupid plot point meant to create forced friction between the lead characters and set up an equally stupid car chase filled climax. It's a poorly done plot turn that not only makes no sense but leads directly to everyone in the main cast leaving to go find a distraught a Clay, meaning we've now left the event that the whole movie is supposed to be situated around.

These sort of dumb plot turns could at least be more forgivable if they were delivering memorable laughs, but Office Christmas Party is incredibly unfunny despite all the strong comedians it's got on-screen. Once again, we have an American R-rated comedy that's convinced the very presence of drugs or genitals is enough to garner laughs without doing anything else. There's no funny set-up to be found, no quality characterization to hang the gags on, it's just like "Look! A dick! Some cocaine! That tree's on fire! Isn't that funny!!" during any of the extremely repetitive party sequences. All of these supposedly ribald antics become quite dull once it becomes apparent that Office Christmas Party has nothing up its sleeve.

This terrible film even stoops to just having Kate McKinnon fart twice to generate would-be laughs, that's how desperate this whole affair gets. Only T.J. Miller gets two or three minor chuckles and even those are few and far in between. The rest of the cast is adrift while playing boring characters and delivering equally tedious jokes. They all deserve far better than this trash and I hope the likes of up-and-coming talent like Jamie Chung and Jillian Bell find more hospitable comedic domiciles soon. stay far away from Office Christmas Party, it's about as funny as watching a Christmas tree burn down.