At Least London Has Fallen Is Better Than Its Predecessor? 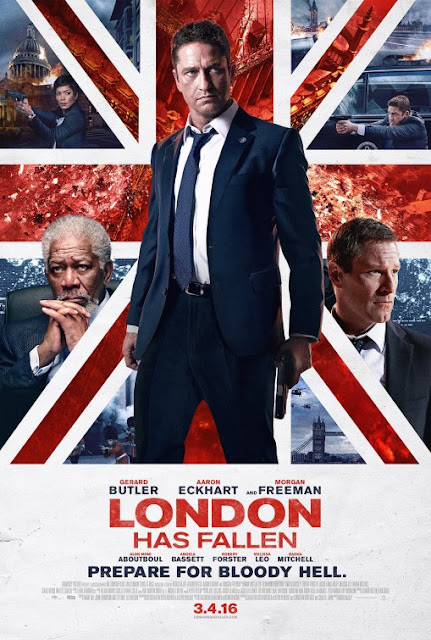 I'm surprised London Has Fallen did even just decent business at the box office earlier this year, mainly because I was surprised the first movie had registered enough with people that they'd greet a sequel with anything more than a "Ho-hum". Olympus Has Fallen was a dreary disaster, carrying a dismal dark visual aesthetic that ensured that every frame was devoid of proper lighting and coherency. None of the action was fun, it was paced poorly and the release of White House Down just three months later served to only emphasize just how off the mark this March 2013 White House action movie truly was.

London Has Fallen is an improvement on Olympus Has Fallen to be sure, but that's mainly from a technical perspective. The film at least uses proper lighting this time, some of it looks to have been shot on location and it doesn't look like its visual effects had a total budget of $40 at best, all problems that the first movie had in spades. But this newest adventure with everyone's favorite bodyguard, Mike Banning (Gerard Butler) is still middling in its finest moments, mainly because it lacks any sort of fun or memorable action, which is a real issue (as you can imagine) for an R-rated action film.

Now, like many other sequels such as Muppets Most Wanted or Garfield: A Tale Of Two Kitties, London Has Fallen differentiates itself from its predecessor by setting the story in Europe, the city of London to be precise! Here, a funeral is being held for the Prime Minister and all of the world leaders, including the President Of The United States (played by Aaron Eckhard) are attending with Mike Banning in tow to protect the POTUS. Once all the world leaders arrive though, they're quickly eliminated by way of various explosives and armed soldiers. Only one major world leader manages to survive....the POTUS, and he's got a pissed off Mike Banning to protect him.

Killing off so many world leaders early on in the plot by way of CGI-laden Roland Emmerich-esque explosions and chaos turns out to be a poor decision since the film has peaked way too early in terms of scope, nothing else in the film is remotely as large-in-scale at that and all of the hand-to-hand gunfights and fistfights are as woefully generic as that montage of those myriad of London landmarks going boom. Not only has the film reached the apex of its purview, it's also set the tone for the kind of derivative action you'll be stuck with for the rest of the running time. Oh goody.

Personally, I'd say London Has Fallen could actually rise to at least being watchable if it didn't have such a terrible lead performance by Gerard Butler, a guy so rugged and tough I imagine he just farts out Axe Body Spray. The dude looks like an action star, but he lacks the charisma or everyman charm that the best of these action guys have. There's a massive chasm of quality separating Mike Banning  from his obvious source of inspiration, John McClane, and that difference in quality hails from how McClane feels like a real person whereas Banning is just a dull slab of muscles punching a bunch of generic evil people to my intense disinterest.

In the supporting cast are Morgan Freeman and Jackie Earl Haley, who both get some of the easiest paychecks of their careers just sitting in a room and watching the movies events unfold on TV. What a nice way to earn some cash! More effort has at least gone into the visual look of the movie, which, as I said at the outset of this review, is exceedingly more professional looking than its predecessor, but director Babak Najafi just can't quite execute these action sequences in a way that feels really exciting, though the lackluster characters aren't helping him in that regard. London Has Fallen is better than the first movie but that's a super low bar to clear and it's mediocore action fare otherwise with a poor leading man and a dire lack of fun action,
Posted by Douglas Laman (NerdInTheBasement) at 4:14 PM