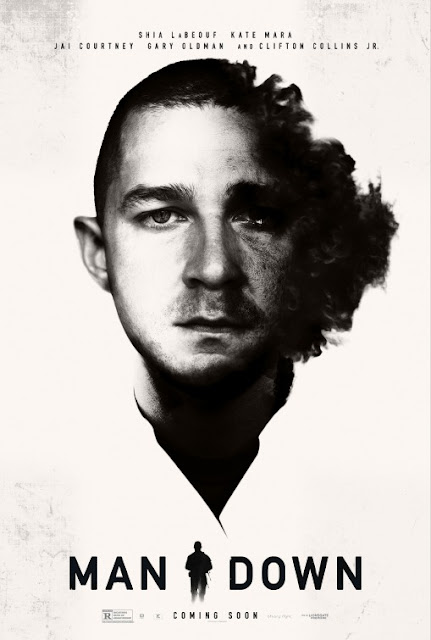 The gradual downfall of Shia LaBeouf over the past decade has been sad to watch to be sure. Once the protege of the likes of Steven Spielberg, LaBeouf has been entangled in a number of legal issues for the past 11 years that have just gradually escalated in their craziness. The dude's basically unemployable by major studios at this point due to his erratic behavior and it's a shame that all of his actions (a number of which, like the plagiarism fiasco, are detestable) because he is talented and deserves better movies to star in than Man Down, a war movie that's been dumped into a small amount of theaters in the first weeks of December and I can't quite say such a release pattern is too ill-fitting for a movie of this level of quality.

This is the part of the review where I'm supposed to briefly summarize the basic plot of the movie, but Man Down is kind of weird in that it's plot is sort of all over the place, it's got a number of individual plotlines that are hard to connect in the movie proper let alone in a brief summary. In short, Gabriel Drummer (Shia LaBeouf) is the protagonist, he's a soldier whose best friend is fellow soldier Devin Roberts (Jai Courtney). We get to see extended scenes depicting their training, them going on a fateful mission and also them traveling a post-apocalyptic wasteland. Other parts of the movie focus on Gabriel's tension-filled homelife with his wife, Natalie Drummer (Kate Mara, who needs to get a new agent at this point).

Amidst all of these stories is a framing device where Gabriel is being talked to by Captain Peyton (Gary Oldman) about what happened on a recent mission that Gabriel feels emotionally traumatized from. There is so much going on within this movie that it suffocates the actually interesting starting concept of examining the effects war has on soldiers, particularly when they attempt to return to civilian life. But any sort of thoughtful introspection on that topic doesn't come through at all in the haphazardly thrown together execution of Man Down, it's all just so sloppy and overwrought. While attempting to juggle so many narrative balls at once, all of those balls just fall to the ground and make a big o'l mess.

Maybe the oddest thing about this production is that Shia LaBeouf is perfectly cast for the conceptual version of this character. He does look like a normal everyman, he doesn't have the big buff model look many other Hollywood leading men have which could easily allow him to camouflage himself as more of an everyday individual, an appropriate skill set for what this character could have been. Plus, LaBeouf has been good in other movies before, the problem is Man Down totally wastes LaBeouf on a thinly-sketched caricature that is nowhere near as layered as a story revolving around a serious piece of subject matter like the mental consequences of being a soldier needs. To boot, LaBeouf's biggest overt emotional moments come across as hammy rather than gut-wrenching, which just further hurts Man Down's attempt at being introspective.

Worst of all in terms of LaBeouf's performance is that he and Jai Courtney have zero chemistry together whenever they share the screen, which is a massive issue since the friendship between their two characters is supposed to be the crux of the entire motion picture. Alas, the two just share generic "bro banter" in their time spent together, there's no sense of realism to their interactions nor a camaraderie that could explain their devotion to each other. This may be one of the biggest flaws of Man Down since it leaves the entire movie without a vital emotional center to ground its overly convoluted story in.

What director Dito Montiel has delivered here is an a poorly made conundrum, a film that throws out a large number of plotlines into its script while not wanting to exert the energy to examine the story points and characters it's created in any meaningful. For a film so intent on centering itself on the humanity of the brave men & women who put their lives on the line for our country, Man Down has a serious problem with carrying any sense of profundity to its proceedings. The good actors in here like Shia LaBeouf and Gary Oldman as well as real life U.S. soldiers deserve better than this mess and so do prospective moviegoers.
Posted by Douglas Laman (NerdInTheBasement) at 2:04 PM