Surviving Christmas Will Make You Lose Faith In Christmas, Comedy And Humanity 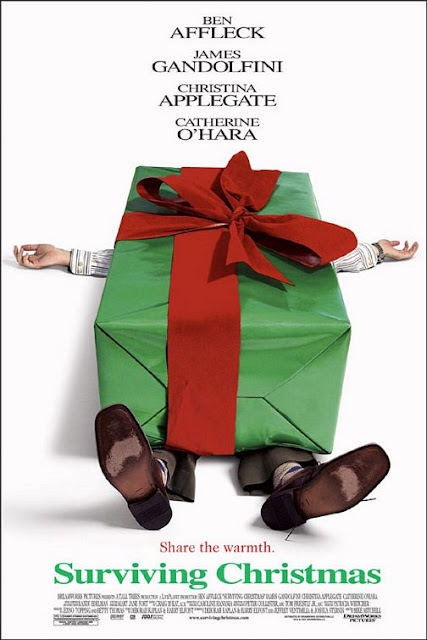 OK, so, the 2000 live-action Grinch movie is still awful awful awful, but holy hell, the only real compliment I can now pay it is that at least it isn't Surviving Christmas, which may indeed by the nadir standard for all of Christmas cinema to come. To watch this 2004 Mike Mitchell movie is to gaze into a deranged human beings interpretation of what dark comedy is as well as an unhinged conception of what constitutes an entertaining protagonist. God only knows what lured Ben Affleck and James Gandolfini into this trash but Jesus Christ, I hope they got a big paycheck. That's more than I got out of this torturous movie.

You may think a rich, attractive and successful guy like Drew Latham (Ben Affleck) has the good life, right? But after his girlfriend ditches him, he realizes he has no one to care about, during Christmastime no less! So Drew heads to his childhood home, which is now occupied by Tom Valco (James Gandolfini) and Alicia Valco (Catherine O'Hara). Upon seeing Drew standing outside their residence, Tom responds to this sight like any sane human being would; by smacking him in the back of the head with a shovel. Ah, out of nowhere unfunny slapstick, the hallmark of every classic Christmas movie! That's why It's A Wonderful Life made sure to have a scene where Clarence kept hitting George Bailey in the balls, don't you know!

Anywho, once Drew regains consciousness, he decides he wants to have a happy happy Christmas that harkens back to his childhood, so he pays Tom $250,000 to have him and his family pretend to be his own family for the holiday season. From there, Drew just trots out a never-ended array of annoying demands. his stunted maturity never coming off as funny and the other characters bouncing off of said personality similarly failing to be humorous.The thing is this movie doesn't seem to understand what dark humor is, it seems to just think overt cruelty or pervasively aggravating characters constitutes dark humor and then calls it a day.

But you can't just say dark things or show dark imagery (like a woman planning to commit suicide) and expect those to be inherently funny. What's the set-up? What's the character grounding for these jokes? Are you ever gonna do smart visual based gags that require a strong sense of shot composition or are you just gonna have more unfunny slapstick ensue? News flash Surviving Christmas; just saying raunchy stuff in the context of a Christmas-themed environment doesn't automatically equal humor. You can throw out all the incestuous overtones you want (before kissing his love interest during the climax, Drew explicitly refers to his lover as his sister) or have Alicia's son discover her nude photographs on the internet, it's not working as comedy. Simply throwing explicit garbage at the screen and hoping it sticks won't work.

Who the hell thought Ben Affleck and his performance of this poorly written character was gonna work on any given level? In any other context, Drew Latham and his demanding obsession with recreating the perfect Christmas-themed family time would be some kind of serial killer villain, but here, he's supposed to be the loveable scamp we root for. Not buying it, not for one second. The films abrupt transition from just making Drew a source of pervasive aggravation to one that they want you to actually emotionally sympathize with is a disastrous plot turn that only further compounds just how bad of a character Drew is. He's not funny, he's not interesting, he's just a pain to tolerate for an extended period of time.

Surviving Christmas isn't the first bad Christmas movie, far from it, but it immediately sinks to the bottom of the list of X-Mas films like a lump of coal tossed into the ocean. I'd ponder what the hell the people behind this atrocity were thinking when they put this project together, but it's all so misshapen and poorly done I doubt there was even a smidgen of thought put into Surviving Christmas. It's just a lame-brained attempt at dark comedy that tries to substitute meek shock value for actual substantive comedy. To paraphrase a quote from George Lucas about his reception to The Star Wars Holiday Special (another holiday-themed disaster) "If I had the time and a sledgehammer, I would track down every cope of [Surviving Christmas] and smash it."
Posted by Douglas Laman (NerdInTheBasement) at 8:24 AM