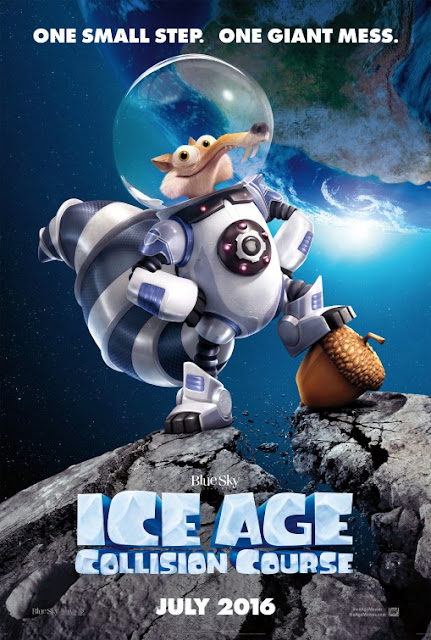 We've all changed since 2002 in profound ways. For instance, back in 2002, I was a kindergartner obsessed with superheroes and animated Disney movies....and now I'm a 20 year old obsessed with superheroes and animated Disney movies. And back in 2002, Ice Age was actually a really movie, one that I revisited earlier this year and was surprised to find held up exceedingly well. It's got a darker edge and a more emotional center to it that the numerous sequels seriously lack in. It's a pity that, over a period of 14 years, we've gone from that strong 2002 animated feature to....whatever the hell you wanna call its newest sequel, Ice Age: Collision Course.

By now, any pretense of these movies being anything more than an excuse to make a quick buck has long since abandoned in favor of hyperactive characters, loud noises and a monotonous storyline more at home with those terrible direct-to-video sequels like Lady & The Tramp 2 that Disney was churning out relentlessly at the turn of the century. The plot in question revolves around the various animals in this series trying to stop an asteroid from hitting Earth. That's...it, really. Buck the weasel (Simon Pegg) can basically deduce any given answer at any given time, including how stop an asteroid, so there's very little tension as to how they're gonna get out of this mess.

The rest of the story pads out the running time by focusing on way too many subplots with the overlarge group of characters these movies have accumulated over four movies. Manny (Ray Romano) coming to terms with the fact that his daughter, Peaches (Keke Palmer), is about to get married, Sid (John Leguizamo) wants to find love, there's a group of eternally young animals who could hold the key to stopping the cataclysmic asteroid, while a family of dino birds chase after Buck. I haven't even charted out all the damn subplots in this movie and it's already more complicated than entire seasons of adult-skewing TV dramas.

There is so much going on here, and yet, none of it's entertaining in the slightest. This is a movie that has a weasel version of Neil DeGrasse Tyson in it and it's somehow far more grating than interesting. A lot of that comes from the fact that Ice Age: Collision Course just seemingly can't stop introducing new elements into its universe. Peaches fiancee, for instance, an unfunny endlessly optimistic mammoth voiced Adam DeVine, just shows up at the start of the story already engaged with Peaches, an abrupt in media res moment that leads into Manny (*sigh*) not approving of the guy her daughter's chosen and boy howdy, you know where this plotline's going, right? That's the kind of laziness Ice Age: Collision Course just revels in constantly.

Everything here just seem like a whole bunch of noisy ersatz chaos in place of anything that might provide actual fun or depth. Even the voice actors sound as bored as we are at this point, including folks like Denis Leary, Jennifer Lopez and Sean William Scott who get next to nothing to do. They're all here for an easy paycheck and who can blame them for wanting easy money? I just wish it didn't sound so much like everyone in this cast was phoning in their vocal performances since it creates a bizarre dissonance in how the animated characters are always hyperactively bouncing about yet carry vocals that sound stilted.

Even the Scrat parts of the story (usually consistent providers of mild amusement even in the most dire past Ice Age entries) are lame here, primarily because of how disconnected he is from the main plot. Yes, Scrat has always had his little nut-centirc antics on the sideline of the Ice Age movies, but whereas in the past he was at least tangentially related to what Manny and co. were doing, now he's no longer on even the same planet as the rest of the cast. For the entire movie, he's out in space on a UFO, tyring to retrieve his acorn. Aside from one extraneous moment, he has no impact on the plot whatsoever and his various acorn hunting shenanigans are simply lame slapstick this go around. He's no fun at all to be with and neither is the movie he happens to be appearing in.
Posted by Douglas Laman (NerdInTheBasement) at 5:26 PM