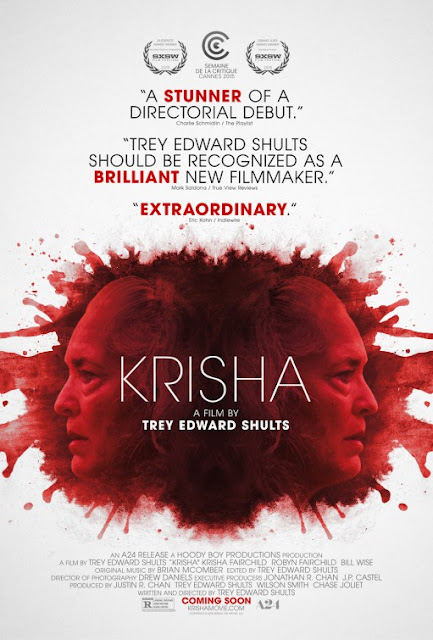 Our past define ourselves. Not to sound too weird or what have you, but our future and our past can be one and the same creation. One portion of our existence informs the other in numerous ways, sometimes for good, sometimes for ill. Keep this in mind as Krisha unfolds, a motion picture all too aware that our actions from the past have consequences that are felt long into the future. Just because tomorrow comes does not mean the slate is clean in terms of both other people's perception of you and your perception of yourself. That concept can make life a struggle and that's certainly one way to describe the sort of existence Krisha (Krisha Fairchild) is going through on this Thanksgiving Day.

Krisha has come home to spend Thanksgiving day with her extended family which includes her estranged son. Though she puts on a cheerful smile and a happy demeanor, her actions from years past still deeply wound her offspring as well as her cantankerous brother-in-law. The film revolves around her trying to manage herself and her demons over the holiday all while trying to mend the relationship between herself and her various family members. It's a tall order to pull off and things soon spiral out of control as Krisha becomes overwhelmed by it all.

To fully depict the level of chaos going in Krisha's mind as she interacts with her family members, the camera frequently lingers on Krisha's exploits in extended single takes, such as the opening scene of the movie. We get to see Krisha bounce off of various individuals in her family in mundane moments and there are no quick cuts to interrupt the rhythm of these subtly (and sometimes not so subtly) intense interactions which are all about carefully timed build-up. No need for extraneous editing tricks to create the illusion of drama, just letting the character of Krisha seethe in this environment is enough to generate plenty of gripping tension that is sure to keep one glued to the screen.

It's worth mentioning that this is the feature film debut of Trey Edward Shults, who employs his various family members to fill out the majority of the cast. Because of that, there's a naturalistic energy to the various cast member interactions that help sell the grounded nature of the piece. These very much feel like real conversations that Krisha's various relatives are engaging in, it all feels exceptionally organic. Which is good that these various relatives sell a believable realistic family dynamic because the whole point of Krisha coming home is normalcy is broken up by the reemergence of the past. You've got to sell that convincing mundane family life in order for one to buy how much Krisha is struggling to adapt and fit back into said environment over this holiday family gathering.

In order for that juxtaposition to work though, both sides of the coin have to fully work of course. The normalcy of family life must be established, but so too must Krisha work as an organic human being. And boy howdy, does she ever come to life, particularly because of some adept screenwriting that smartly never goes into too much detail on what events transpired in the past that left Kirsha so distant from her family. It makes total sense that Krisha as a character wouldn't be babbling on and on about horrific going-ons from the past, she's trying like hell to live in the here and now. All we need to know about the past is that Krisha wasn't there for her son and the rest of the family and that creates the vital drama necessary to get the plot in motion. Any more information than that might have interrupted the elegant simplicity of the story as well as forced in some unnatural expository dialogue into an otherwise very naturalistic setting.

The idea of using Trey Edward Shults family members for cast members in this movie pays off in dividends with Krisha Fairchild in the lead role. Fairchild is able to pull off this complex character splendidly, I love just how her body language in certain scenes conveys so much about how she's trying to tear herself away from the actions of her past. Those choices we make yesterday can very much be one of the greatest influences on what we in the here and now and Krisha Fairchild's performance is very much informed by the truism. She's just one of the many elements of Krisha that mkaes this small film really stand out from the pack in an emotionally powerful way.

Posted by Douglas Laman (NerdInTheBasement) at 8:58 AM