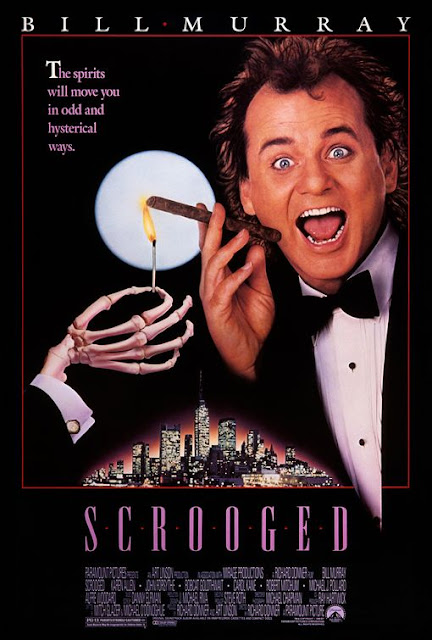 Why do storytellers love A Christmas Carol by Charles Dickens so much to the point that it's appeared in countless pieces of media for over a century now? Well, it being in the public domain certainly doesn't hurt, but the narrative allows one to easily plug in characters into the well-known roles of the multiple ghosts, Scrooge, Bob Cratchit, Tiny Tim, etc. Plus, the lead character, Ebenezer Scrooge, stands out amongst other Christmas tales in that he's crotchety and cruel, though his unique (among Christmas-related tales) personality does get resolved just in time for an emotionally fulfilling climax. It's basically a "have your cake and eat it too" scenario with Scrooge on a thematic level.

Plus, for Paramount Pictures in the late 1980's, A Christmas Carol was the perfect template to construct a new Bill Murray comedy around, one that could have a Scrooge-stand-in that allowed Murray to play the kind of sleazeball character audiences fell in love with in Murray's 1984 blockbuster Ghostbusters. Thus, Scrooged was born, a take on A Christmas Carol very much set in the then-modern day landscape of 1988 in New York City, where Frank Cross (Bill Murray) is a media mogul who couldn't care less about the feelings of others, he just wants more and more success for his media empire.

With an ambitious live-TV event adapting A Christmas Carol (how meta!) just a day away, Cross is visited by a ghost of a deceased friend who tells him he shall be visited by three spirits who will attempt to save his soul from the greedy wickedness that has consumed it. And so, on Christmas Eve, Cross is visited by the various ghosts who show him his past, present and future. Following the story template of Dickens original work turns out to be a great asset for Scrooged, since it keeps things moving in the movie at a reasonable pace and lends a sense of structure to the movie. It may keep things mostly predictable following Dickens text so closely, but at least it isn't meandering, which is the kiss of death for comedies.

Actually, despite being a comedy, there aren't a ton of laughs to be found in Scrooged. Bill Murray is amusing enough in the lead part but the rest of the cast (like the characters played by Alfre Woodard and Karne Allen) are either playing straight-men to Cross's antics or fulfilling one-note stereotypes. That latter description is particularly apt for the first two Ghosts that visit Cross. The Ghost of Christmas Past comes in the form of Taxi cab driver with a heavy New York accent while The Ghost Of Christmas Present is (for some reason) a fairy of some kind who revels in handing out slapstick violence to Cross during their time together. Both have a pretty simple schtick that gets old fast and there isn't too much successful humor to be found in the movie otherwise.

One truly notable misstep in  translating A Christmas Carol to Scrooged is the handling of Frank's ex-lover, Claire Phillips (Karen Allen). Now, typically, Scrooge or any stand-in for the character in these retellings is a lonely old miser who swore off romantic attachments after his selfish nature drove away the only woman he could ever love. It's poignant, it's sweet...it's completely botched both in the context of translating the source material to this adaptation and in its own individual context. Claire is not only seen by Frank prior to his visits by the three ghosts, she and Frank are friendly and flirty, robbing the eventual flashback showing him destroy their relationship of any emotional potency. The two seem to be on great terms now, so what point is this flashback trying to make in the context of this story?

All of those visits by the Ghosts are accompanied by some solid visual effects as well as a couple of appropriately wonky sets in the Ghost Of Christmas Future segment that give Scrooged a polished look production-wise. And even while it stumbles over executing some earlier emotional cues, the climax with a redeemed Frank is well-handled and ends this Yuletide movie on an appropriately cheery note. I doubt Scrooged will make its way into the Christmas movies I annually revisit, but it's agreeable enough while it lasts and at least makes decent use of its leading man.
Posted by Douglas Laman (NerdInTheBasement) at 1:07 PM