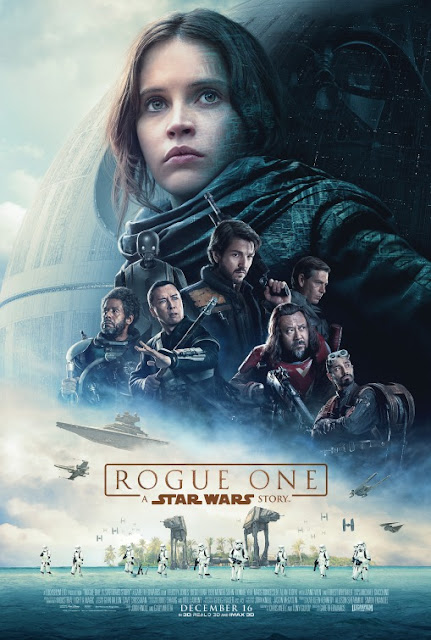 With The Force Awakens reigniting the Star Wars saga last year, now comes time for the next stage of Disney's massive plans for the Star Wars franchise; seeing if they can do stand-alone spin-off movies without either confusing audiences or burning them off of Star Wars by way of subpar quality. The first of these spin-off films is Gareth Edwards Rogue One, a motion picture designed to answer the question that a handful of super hardcore Star Wars geeks may have briefly pondered once or twice over the years before moving on: "Who exactly got those Death Star plans to Leia?" The answer lies within the running time of Rogue One, wherein we get to see the folks behind the intrepid mission to retrieve the Death Star plans as well as plenty of exploration as to what the galaxy was like before Luke Skywalker's adventure in the original Star Wars movie began.

Like many-a Star Wars protagonists before her (and I'm sure Han Solo will follow in her footsteps when his May 2018 solo movie comes around), Jyn Erso has grown up without her real parents, living on the run, causing all sorts of trouble and being a wayward soul in the galaxy. But then, she's recruited by some Rebellion soldiers for a most important mission; her father, Galen Erso (Mads Mikkelsen), is the man whose been helping to build a superweapon known as the Death Star for the evil Empire. For the first time in a while, Jyn is gonna have to fight for something bigger than herself as she teams up with the likes of Rebel soldier Cassian Andor (Diego Luna), a reprogrammed Empire droid named K-2SO (Alan Tudyk), a former pilot for the Empire Bodhi Rook (Riz Ahmed) and the incomparable duo of Chirrut Imwe (Donnie Yen) and Baze Malbus (Wen Jiang).

It's obvious that this movie is not just taking cues from past Star Wars movies but also men-on-a-mission type films, including the recent Marvel Cinematic Universe features The Avengers and Guardians Of The Galaxy which have certainly made this type of action movie storytelling more popular than ever. But while it may hail from an existing franchise and have elements of its DNA inspired by other movies, Rogue One is admirably diligent in forging its own identity, particularly in a visual sense. Viewers are taken into the nitty-gritty everyday parts of the galaxy in Rogue One and the production and set designs do a great job of conveying how well-worn everything is, they're taking all the right visual cues on how to make the various sets look lived-in from the original Star Wars trilogy.

The script continues that emphasis on going for a more nitty-gritty approach in the visuals by making the moral ground of its characters more shaky. For instance, the likes of Cassian and Bodhi have not been perfect souls in the past, not by a long shot, and seeing the varying degrees of mortality play out amongst the ensemble cast ins quite interesting from a dramatic perspective as well as offering something on a thematic level that we haven't seen a ton of in prior Star Wars movies. Again, going in these more unused narrative paths for a Star Wars movie show a commitment to the audacious that'd be easy to admire even if it didn't have the strong execution that Rogue One has in spades.

That main ensemble cast is one of the best elements of Rogue One actually. This movies group of lead characters is like the anti-Suicide Squad in that I understand completely the motivations behind these characters as well as the individual dynamics between certain characters that help flesh out individual personalities. For instance, Baze and Chirrut have a pleasant rapport regarding how Chirrut is a strong believer in The Force while Baze is sort of an Atheist, if you will, when it comes to the concept of The Force. K-2SO, meanwhile, is loyal to a fault for Cassian, though he's got his own blunt and unwavering personality that's extremely fun to see, especially since Alan Tudyk's got some excellent comedic timing for K-2SO's various witticisms.

Emphasizing the dynamic between the lead characters turns out to be Rogue One's secret weapon, though I wish they utilized that part of the movie more in a second act deviation involving Galen Erso where the focus narrows down to just Cassian and Jyn for a brief period. Would have really liked to see more of the main team bouncing off each other in that segment for sure, but you get plenty of interaction between the lead characters in a gangbusters climax that merges together plenty of war movie action sequences and character-related actions in a riveting manner. Isn't it nice when you actually care about the characters on-screen so extended action scenes become more than just a blur of noise and color?

When it comes to the climactic action, director Gareth Edwards and the movies trio of editors (John Gilroy, Colin Goudie, Jabez Olssen) deserve plenty of praise for keeping that thrilling climax of the movie visually cohesive, as the camera whizzes around various individual characters, space dogfights and all sorts of activities without it all becoming incoherent. Keeping most of the action seen on-screen smaller in scale I think is a key element of why it all manages to flow together pretty seamlessly and reducing the scope a bit allows the underlying character elements of these sequences to flourish. The most important thing in a number of these moments isn't seeing big explosions go boom but rather having the audience see how the various members of the ensemble cast have grown over the course of the motion picture.

It's extremely pleasing to see that Rogue One carries over the type of elements that worked so well for last years high-quality Star Wars adventure (well-realized characters, good action sequences) and apply them to a unique setting and aesthetic (though it does carry over one notable flaw from The Force Awakens which is that there's also one poorly done and distracting CGI heavy character in Rogue One). Rogue One is an extremely well-polished science-fiction adventure, one whose last half-hour particularly had me positively giddy when goes for broke on depicting an excellent ground-level depiction of a wartime scenario in a Star Wars movie. Surprisingly, there is a story to be told about how those Death Star plans got to Princess Leia, and it is a fun one indeed!

Oh, and for those who are curious about how Darth Vader is in this movie....I can't imagine anyone who isn't a fan of this character leaving the theater disappointed over what he gets to do in his (appropriately) minimal screentime.
Posted by Douglas Laman (NerdInTheBasement) at 9:37 AM