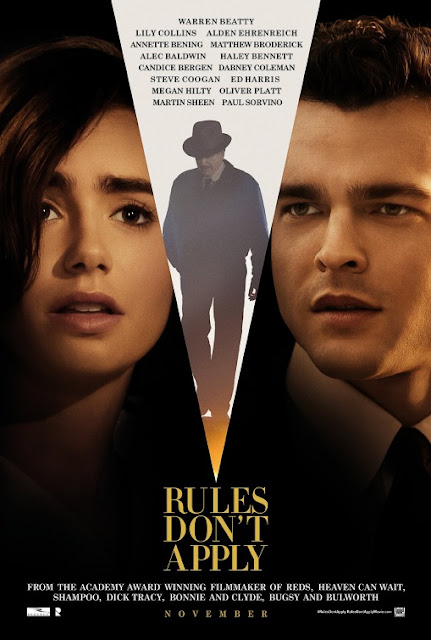 Hiatuses are tricky things in art. Lord knows time away from any activity can sometimes result in you coming back as a more mature experienced person, but other times, well, the old adage rings true: you can't go home again. Just look at how extended breaks didn't help the return of the Anchorman and Arrested Development crew in their underwhelming 2013 reunion endeavors. For Warren Beatty, it's been 15 years since he was in front of the camera and nearly two whole decades since he last directed a motion picture. The wait for his newest movie, Rules Don't Apply, was, unfortunately, not worth all that waiting around.

For his return to the directing chair, Beatty has decided to focus on reclusive real-life figure Howard Hughes, an individual for whom centering a movie around is a tricky business. Because of Hughes extremely reclusive nature, much of his later years carry more than a whiff of mystery, meaning there aren't many well-known real life character dynamics to draw from. Not to mention the fact that depicting the way his "eccentric" (as Wikipedia puts it) deposition that affected his everyday life could come as exploitative if a movie doesn';t handle it right. These reasons are likely why Hughes isn't the sole lead of Rules Don't Apply, he's also got a young wannabe starlet, Marla Maples (Lilly Collins) and a driver he employs named Frank (Alden Ehrenreich) to share the spotlight with.

Much of our story takes place in the late 1950's, as Marla moves out to Los Angeles from Virginia to start life as an actor in the employment of Mr. Hughes and Frank being the driver hired to cart her around everywhere she needs to go. The two, wouldn't you know it, manage to strike up a romance, which gets complicated when Hughes decides to spring upon Marla a marriage proposal that would ensure he doesn't have to go to a looney bin. It's a love-triangle tale with Howard Hughes as the lynchpin of it all basically. An interesting concept maybe, but one that doesn't work at all in execution.

Right from the get-go, something feels off in Rules Don't Apply, though maybe that was just the jarring editing that was leaving me a tad bit mentally discombobulated. At the beginning of the movie, there's a bizarre tendency for scenes to abruptly conclude without any indication that they're about to end and we just move onto a completely new location that hasn't been established before. Everything's moving so far along that none of the scenes we keep cutting to manage to leave an impact, they don't get to simmer and play out like they should. Extended dialogue scenes later on in the movie feel akin to receiving gallons of ice water after being trapped in the Sahara for a year; finally! We get to stick to one idea, one location and two specific characters for more than 60 seconds!

But really, even if the editing A-grade caliber stuff, I doubt it would really help the flaccid characters be more appealing. Only Marla Maples leaves even a whiff of an impression, mainly because Lilly Collins plays her character's fish-out-of-water personality well enough and she gets to croon a genuinely lovely tune that employs the film's title But she's gone for the last third of the movie, and since she couldn't make the first two acts any better than "intermittently forgettable, prepare for an overlong third act where we're stuck with Warren Beatty's naturalistic but one-note performance as Howard Hughes and an exceptionally stilted turn from Alden Ehrenreich as Frank.

If one is looking for a film that offers insight into the way Howard Hughes operated in his final years or what it must have been like to work for him, search for that elsewhere. Most of the time spent with Frank working with Howard Hughes either results in poorly-done jokes (like an obsession Howard Hughes has for certain ice cream flavors) or shoehorned-in surface-level maudlin content that constantly references Howard Hughes daddy issues. Considering how much Rules Don't Apply manages to botch both chances for yuks and depth in equal measure, I'm starting to wonder if it might have been better for everyone if Warren Beatty had just stayed on hiatus instead of delivering this poorly-made and forgettable motion picture.
Posted by Douglas Laman (NerdInTheBasement) at 9:20 AM