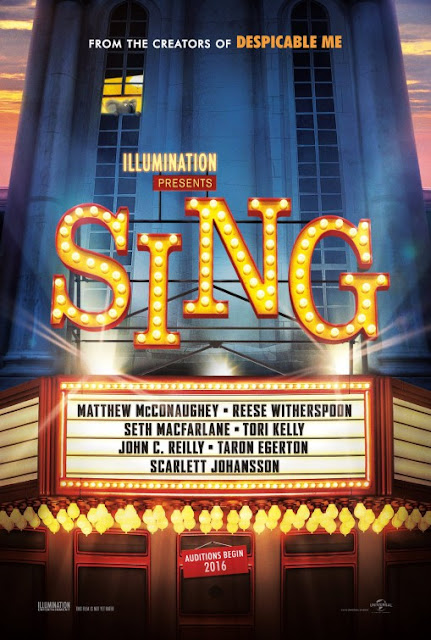 The highest piece of praise I can offer Sing is that it's the best motion picture created by Illumination Entertainment since the very first Despicable Me movie back in 2010. But considering that in the six year span since the first Despicable Me they've only made the likes of Hop, that forgettable Lorax movie, two middling Despicable Me follow-ups and this summer's blah The Secret Life Of Pets, that's not a high bar to clear. Even worse, taken on its own merits, Sing is just an average, inoffensive but extremely unmemorable kind of movie, one without much of anything in the way of a distinctive identity to lodge it into ones mind once the credits begin to roll.

Buster Moon (Matthew McConaughey) is a koala who loves the world of stage performances, but it seems the rest of the world doesn't share his fascination with the artform, as the theater he owns has fallen on rough times. With very little money coming in, he comes up with a potentially foolproof plan to save his theater; put on a singing competition where everyday animals can show off their pipes and potentially win some money (he means to offer a $1,000 reward, a typing malfunction means posters advertising the event say he's offering a $100,000 reward) in the process. Amongst those seven animals who end up joining his singing competition are porcupine teenager Ash (Scarlett Johansson), stay-at-home porker Rosita (Reese Witherspoon) and a gorilla named Johnny (Taron Edgerton).

As the plot summary I just cobbled together makes quite clear, there's a lot of famous faces in Sing. That's very much keeping in step with the American animation trend of just shoving as many big-name actors as possible (even characters in Sing who gets a few lines are voiced by the likes of Leslie Jones and Rhea Perlman) into a given animated feature in lieu of hiring actual voice actors, but thankfully, the majority of the actors on hand in Sing do solid work. The likes of McConaughey, Edgerton, Johansson and John C. Reily are probably the best part of the movie, they sing well, have some decent vocal-related comedic timing, the majority of the ensemble cast justifies their presence here beyond being a big name that can go promote this film on Jimmy Fallon or Seth Myers or whatever.

It isn't just in hiring big-name voice actors for the majority of characters with dialogue that Sing bears more than a passing resemblance to other computer-animated family fare. Sing carries no real sense of originality in its bones, its sundry of subplots unfold in a way that lacks any surprises or even the most basic sense of panache. Even the musical numbers (which are way less frequent than you'd expect, 95% of the singing occurs in the climax) use the most well-trodden tunes like Shake It Off and Hallelujah to convey how certain characters feel. C'mon, at least use a more obscure Taylor Swift power anthem! And while you're at it, focus less of your story on a charlatan mouse played by Seth MacFarlane, who gets the most amount of screentime for any character that isn't Buster Moon. He's no fun to be around and his overt cruelty towards the other figures in the story gets neither the comeuppance nor redemption needed to make this type of character bearable.

Even the animation in Sing isn't much fun to look at, the with this society of animals being 100% less fun to look at than the one in Zootopia. Aside from one humorous shot depicting how goldfish travel up steps in a city, the environments Sing take place in suffer greatly from the cost-cutting maneuvers incorporated by Illumination Entertainment to keep their movies cheap to make. For example, this means there's little variety in the types of automobiles we see in the film. Despite numerous different types of animals existing in this universe, both mice and bears drive the same sized cars. There could have been a lot of opportunities for fun visual-oriented humor if they had made differing sized automobiles to accommodate for the level of variety in the size of the animals in this city, but it would have cost too much money to make different types of cars, so such opportunities aren't seized.

Basically, any chance to do something sort of out-of-the-box or even just fun is eschewed in Sing in favor of going the tired-and-true route in every respect. Its story is cookie-cutter and seriously lacking in energy while its obviously cheap animation (just notice how any crowd scenes in this film use the same animals over and over again in a way too noticeable manner) is similarly nothing special to look at. Even it's intended feel-good (or feel-great, as the TV spots for Sing proclaim) inspirational atmosphere gets severely undercut by how much of its running time is occupied by a mean-spirited mouse. Looks like I'll have to keep waiting for Illumination Entertainment to put out a movie that proves that them putting out a good motion picture with Despicable Me was no fluke.
Posted by Douglas Laman (NerdInTheBasement) at 7:12 PM