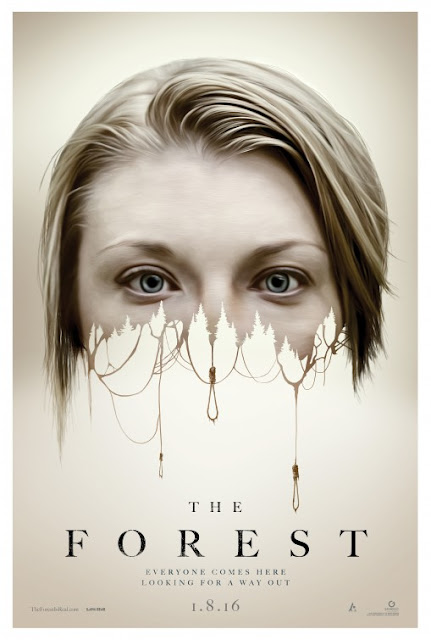 While The Devil Inside was far from the first horror movie to debut in January or even on the first weekend of that month, its massive $33.7 million opening meant the first weekend of January was now a hot spot for subsequent horror movies like Texas Chainsaw 3D, Paranormal Activity: The Marked Ones and The Woman In Black 2: Angel Of Death to make their debuts in this specific timeframe in hopes of replicating that 2012 horror films box office success.  Debuting on January 8th this year (technically the second weekend of January but still very much an early January release), The Forest was 2016's entry in this new phenomenon as well as the very first wide release of the entire year.

Unlike the other past three horror films attempting to mimic the success of The Devil Inside, The Forest is a non-sequel that follows Sara Price (Natalie Dormer) as she heads to the real-life location known as the Aokigahara Forest (which is a real-life woodland area located in Japan) to search for her twin sister who may have gone to this place to commit suicide. This forest is a place that is well-known for messing with your mind, and the longer Sara stays here, the more uncertain and crazy things become, particularly in relation to her dynamic with a guide named Aiden (Taylor Kinney).

Something that sticks out to me right away about The Forest is that's a way more professional looking production than other shoe-string budget horror movies. Most of these types of films are filmed either by way of shaky cam filled found footage or amateurish filming techniques that make the entire movie look sloppy and minimize the impact of the scares. Instead, The Forest actually looks sharp and clear in the way its filmed, a nice change of pace from other cheap-o horror films that sometimes look like they failed to even get a proper cinematographer.

Plus, Natalie Dormer actually gives a solid lead performance as Sara that's good enough to make me curious how she would fare in a far better project. It's a pity she doesn't get to do more than just scream and shudder in the second half of The Forest, but she's natural enough in the opening scenes to warrant some praise. Unfortunately, a decent lead performance a competent visual aesthetic can't save The Forest from its poor script, which fails to drum up any good scares. Instead of trippy visuals or scares relying on uncertainty, The Forest settles for humdrum jump scares that are at best generic and at worst outright lazy.

Once you've seen one being jump out from the shadows in The Forest, well, you've seen 'em all and it's a trick that the movie runs into the ground and then some. Plus, there's a similarly predictable quality attached to Sara's slowly deteriorating trust of Aidan that makes it easy to see what kind of plodding twists the script will be trotting out next as supposedly big "GOTCHA!" moments. With no scares or real tension to drive the plot, The Forest becomes more of a slog than the thrilling scarefest it was obviously supposed to be.

When it debuted back on January 8th, The Forest bowed to a much lower opening weekend than many past early January horror titles and quickly faded away from the public consciousness. Considering how average The Forst is, I can't say it being so quickly forgotten is entirely unwarranted. It may have better camerawork and acting with its lead performer than bottom-of-the-barrel American horror fare, but it's so desperately lacking in scares that it still ends up being a horror movie misfire.