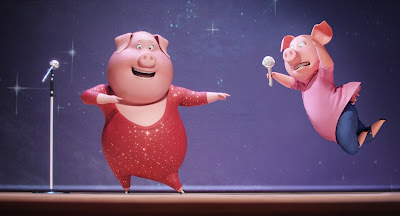 This past Tuesday, I did the  first part in my two-part column wherein I predict just how much money various movies being released over the extended holiday break 2016 would make. Today is the second part of that series! One quick thing before we go forward; all but one of the movies discussed below are not opening on a Friday. I am predicting solely the opening 3-day weekend for the first three titles, and for Fences, I am predicting its single opening day gross as its opening weekend since it's opening on Sunday December 25. Sound good? OK, let's get down to business!!

December 21-25 Sing
Maybe my boldest box office prediction in this two-part column is that I'm not forecasting Sing to be another massive smash hit for Illumination Entertainment on par with their past movies like The Secret Life Of Pets and Despicable Me. Now, will it make money? Oh yeah, especially since the movie only costs $75 million, there's no way they're not doing at least five times their budget on this one. But the marketing for Sing has been a bit more lackluster compared to pass Illumination features. Oh it's been as omnipresent as ever, but compared to the "This is what your pets do when they're not looking!" angle of the ads for The Secret Life Of Pets and the "What if a supervillain did normal Dad things?" for the ads of Despicable Me that managed to incorporate relatable aspects of potential viewers lives into their marketing, there's been a more scattered approach for the Sing trailers and ads, likely as a way to showcase all of the members of its ensemble cast.

A less concentrated marketing scheme aside, Sing still has a long Christmas holiday at its disposal at the box office, so it should still make some coin, even if its box office total is more on the order of Hotel Transylvania 2 (which hails from Sony Pictures Animation) rather than The Secret Life Of Pets. While its opening weekend will be muted by Christmas Eve falling on a Saturday, Sing should still make a decent sum in its debut and stick around as a prime family moviegoing choice for the rest of the holidays.

Passengers
A movie starring Chris Pratt and Jennifer Lawrence should be a guaranteed box office slam-dunk, but three weeks out from its release, Passengers seems to be having some trouble in its marketing campaign that could keep it from really clicking. Sony's recent trouble with marketing large-scale blockbusters seems to have seeped over into Passengers with a marketing campaign that got a late start (just three months prior to its release), one of the blandest posters of the year that doesn't even indicate what genre the movie its promoting takes place in and further promotional materials that were tonally erratic at best.

The good news for Passengers is that it's main plot-related hook (two people wake up on a space station years before they're supposed to) is still coming through the ads and the promise of seeing two beloved actors in a science-fiction setting should still be appealing enough to the masses to keep this one above water. Plus, science-fiction dramas like Gravity, Interstellar and this past months Arrival have been making some serious coin, so don't be surprised if Passengers follows suit.

Assassin's Creed
If the past two movies I've discussed in the second part of this column have had to face some marketing-related hurdles, the Assassin's Creed marketing campaign has been (let's not mince words here) an outright disaster. Both of the trailers for the movie overwhelm audiences unfamiliar with the games with exposition, Michael Fassbender's lead character is given no personality to speak of in the ads that viewers can latch onto and its visual familiarity to video game movie flops like Prince Of Persia: Sands Of Time is probably not the kind of film 20th Century Fox wanted their major Christmastime blockbuster to emulate.

Facing that dreadful marketing campaign, as well as some serious competition from the likes of Rogue One and Passengers on its opening weekend, it's pretty unlikely that Assassin's Creed grosses more than $15 million in its opening weekend. This is likely gonna be the most high-profile box office miss of the yuletide season. 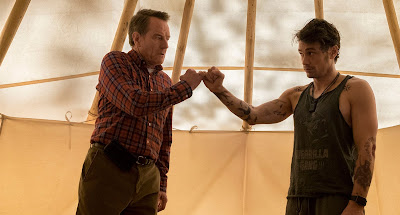 Why Him?
It's pretty apparent that the marketing for Why Him? is patterning itself after last year's Christmas comedy smash hit Daddy's Home, but there's two big factors that are gonna prevent Why Him? from coming anywhere close to Daddy's Home's box office. First off, Daddy's Home reunited Will Ferrell and Mark Wahlberg from the beloved 2010 The Other Guys, whereas Why Him?'s two leading men (James Franco and Bryan Cranston) have no previous beloved movies to draw audience goodwill from. Also, Daddy's Home was PG-13 and had its trailer play on numerous family films, meaning it could work as more of a family-skewed comedy playing during a time of the year where families are together. Daddy;s Home being R-rated means it won't be able to tap into that lucrative family market.

That being said, the lack of big comedies in the marketplace (Office Christmas Party probably won't be big enough to hinder Why Him?) will probably lead to this comedy to at least outgrossing 20th Century Fox's other Christmastime release, the far more expensive Assassin's Creed. Otherwise, this one will probably come and go in a flash at the box office.

Fences
Fences appears to be one of the safer box office bets in recent memory. Denzel Washington is one of the more consistently successful actors working today (all but one of his films since January 2010 have exceeded $80 million at the box office) and pairing him up with a well-known actor like Viola Davis should only increase the chances of this one finding success. Four years ago, Denzel Washington starred in the adult drama Flight, which grossed $93.7 million domestically. Being paired up with Violas Davis plus opening over the Christmas holiday and some major Oscar buzz should get it slightly above that movie domestically, especially if it manages to snag some high-profile Oscar nominations that could keep it in theaters well into February.