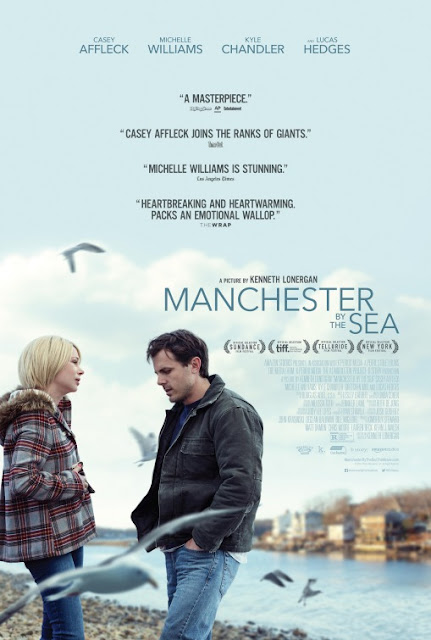 To carry pain in one's heart is to be human. Our own experiences in life begin and end with regret, no matter how fruitful or unsuccessful our lives turn out to be. It's always the unsatisfactory moments in our own lives that preoccupy our minds. One's sleeping patterns can easily be disrupted by contemplating the simple ways a person could have substantially improved their own life. We've all got our own emotional baggage stemming from the past to work out, and so, Manchester By The Sea, feels very much an emotionally universal project, one that is fully pivoted upon this thematically rich concept. What follows is quite excellent in the way it deftly handles some tricky subject matter without coming across as exploitative or manipulative. It honestly, above all else, feels true.

Lee Chandler (Casey Affleck) does not live a complicated life. In these winter months, this Quincy, Massachusetts resident spends his morning clearing his walkway of snow before heading off to be a janitor and tending to the various problems of local townspeople. He's emotionally distant, he's not very good at interacting with other human beings, he's very much like the lead character Kanji Watanabe in Akira Kurosawa's 1952 film Ikiru, in that both Lee Chandler and Kanji Watanabe are withdrawn human beings best described as "mummies". Two other things worth noting about Lee Chandler; he's the lead character of Manchester By The Sea and his brother has just passed away.

The tragic loss of his brother means the responsibility of raising Lee Chandler's 16-year-old nephew, Patrick, has been passed onto....Lee Chandler. Patrick refuses to move over to Quincy with Lee since he's got his own life in his hometown, but Lee is having trouble raising Patrick here since he used to live in this very same town in more idyllic times. Manchester By The Sea takes its time getting to the reveal of what exactly tore apart Lee Chandler's life all those years ago, but despite all of the screentime dedicated to preparing you emotionally to see something (though we, the viewer, don't know what) gut-wrenching, what unfolds is overwhelming in both its darker nature and the way the movie depicts it.

In terms of both the way its edited and the types of shots it uses, Manchester By The Sea has a very subdued visual style that works to the movies benefit in an emotionally powerful. This is a very naturalistic story requiring a delicate touch to work with the darker storytelling elements within, and over-the-top frantic editing and similarly distracting visual choices could have detracted from the intimate small-scale atmosphere the film needs to work. Instead, there's a restrained approach to visually depicting the movies story that sneaks up on you in terms of its emotional power.  I honest to God eft the movie thinking there were moments where director Kenneth Lonergan had a stilted directing style, but ruminating on the motion picture further, I've come to realize he actually gives Manchester By The Sea its own aesthetic that's stealthy in the way it enhances visually the story its telling.

Take, for example, a scene at night where Patrick goes to his freezer only to find all these packages of meat plopping to the floor. As he struggles to put all the meat back in the freezer, he begins to slowly but noticeably break down emotionally in regards to the recent tragedy that has befallen his father. Close-up shots are eschewed here as an elongated medium shot is instead used that allows the viewer to take in the biggest display of vulnerability on the part of Patrick yet in the story. Manchester By The Sea does not want any part of its production to distract the viewer from what's transpiring on-screen. It's raw and uncomfortable to watch in all the right ways, helped by the fact that Lucas Hedges gives an exemplary performance that's crucial to the movie working as well as it does.

Lucas Hedges is a youngster whose most previously most high-profile work as an actor was two minor roles in the last two Wes Anderson films. Expect to see him in way more motion pictures in the years to come as his performance in Manchester By The Sea is outstanding for sure. Somehow even better is Casey Affleck in the lead role of Lee Chandler, a performance that requires a subdued sense of aching that Affleck absolutely sells with painful authenticity. Just watching him standing still in certain moments conveys a lifetime of torment, it's truly an incredible turn that reveals a whole new layer for Affleck as an actor.

Watching Affleck and Hedges bounce off each other in their respective roles provides a couple moments of amusement but primarily their interactions help underscore the way both of their characters are coming to terms with the immense amount of agony in their lives. There are no tidy resolutions, no easy morals to be found in their time spent together, but that's how it should be. After all, Manchester By The Sea is a very true-to-life depiction of coping with grief and you don't get one-trick solutions to that. This is a movie that completely understands that and depicts it by way of this emotionally stirring motion picture.
Posted by Douglas Laman (NerdInTheBasement) at 4:04 PM