The Hollars Is An Excruciatingly Bad Parody Of Conventional American Indie Movies That...Wait, This Isn't A Parody??? 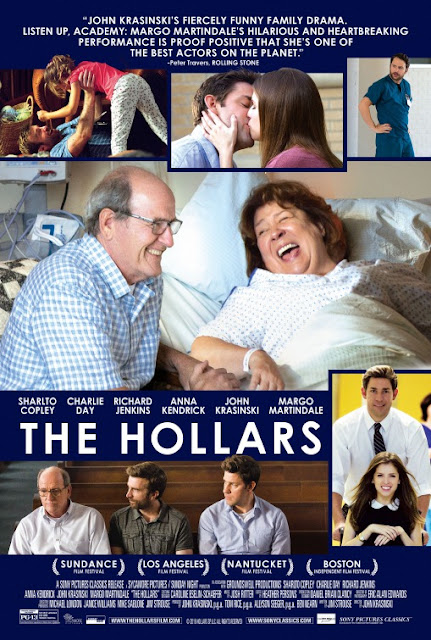 When something tries to be personal in a very un-personal (for lack of a better word) way, the resulting experience is the very definition of "awkward". Trying to watch a person or a story or even just some manufactured item try to be something it's very plainly not is extremely uncomfortable to witness. That emotion basically sums up watching The Hollars, a movie that tries to tell a small-scale story of a dysfunctional family coming back together during a time of crisis very much wants to pluck at your heartstrings and make you laugh with the various quirks of the numerous family members, but it's trying to tell this potentially personal story in the most bland and generic way. None of it has any depth or real insight to it, it very much is the awkward experience of watching a movie try to be something it's not.

Instead of being emotional or thoughtful, The Hollars is like some sort of deranged creation comprised of all sorts of American indie movie tropes executed in the most slapdash manner possible made by some mad scientist who I guess has some sort of vendetta against the Duplass Brothers and their kin. The story proper concerns John Hollar (John Krasinski), as a guy whose coming home to the small town where he grew up again because his mother, Sally (Margo Martindale) has a tumor on her brain. This means he's reuniting with his brother, Ron (Sharlto Copley) and his dad, Don (Richard Jenkins) all while trying to navigate strife with his pregnant girlfriend Rebecca (Anna Kendrick).

Making John the lead character of this story feels like one of the biggest storytelling-centric flaws of The Hollars. Though no one else in this film rises above being a caricature, John is just so flat and boring, it's difficult to imagine that The Hollars would have been significantly worse if the spotlight had drifted off to another character. In the film, John's entire growth as character consists of him not making out with an old flame and everyone telling him how awesome of an artist he is. Riveting drama, this is not. Even his bouts with his family members are boring, particularly with his brother which seems like it's full of conflict on Ron's part but that never goes anywhere.

John Krasinski just can't deliver a good performance with this poorly-written character, but unfortunately, Krasinski has similarly little success as director with The Hollars. There's just nothing distinctive about the way he puts this project together and his visual choices leave a lot to be desired. There's some shot compositions (such as the bizarre amount of empty space on a shot of Ron having a discussion with his ex-wife in a hospital hallway) that just stick out as exceedingly amateurish above all else. While this isn't Krasinski's first time behind the camera (he directed a 2009 indie effort and three episodes of The Office), The Hollars doesn't make a great case for him continuing in this profession.

Somehow, Krasinski managed to garner a pretty notable cast for this project. I hope everyone got financially compensated properly and that there were also plenty of goodies at the craft services table to keep them all from going insane while making this terrible movie. Richard Jenkins and Margo Martindale actually give the best performances in the film, mainly because the two are very natural in their camaraderie as a couple who've been married for eons. A film focused on them would have almost certainly been better. Anna Kendrick is saddled with the thankless girlfriend role and Mary Elizabeth Winstead fares ever worse, appearing in one scene just to make out with the protagnist. When I said I wanted Mary Elizabeth Winstead to get more roles, this is not what I had in mind.

It's actually weird to see Sharlto Copley play kind of a normal-ish person since his entire career up to this point has comprised solely of underwritten villain roles or over-the-top supporting parts. He's still got some definitive off-beaten elements in his character though, in fact, his obsessive ex-boyfriend/divorced father character is one that's way creepier and disturbed than The Hollars seems to realize. I suppose acknowledging the darker elements of Copley's character would have disrupted the nauseatingly easy breezy shallow atmosphere The Hollars lives in.

Posted by Douglas Laman (NerdInTheBasement) at 11:20 AM