Spectral Gets Flanked By Its Generic Nature 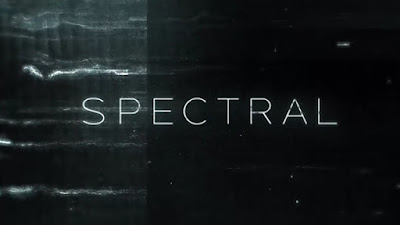 Spectral's struggle to getting released at all feels like as much of a struggle as any of the supernatural wartime battles seen in the movie itself. Filmed back in the late parts of summer 2014, the film was produced by Legendary Pictures and set to be released theatrically by Universal in August 2016. Then, two months prior to its release, Universal swiped it off the release schedule without explanation. Spectral basically ceased to exist until two weeks ago, when Netflix abruptly announced that they'd be the ones releasing it on their streaming service on December 9th. They dropped the title yesterday with zero fanfare, no even the official Netflix Facebook page was promoting this thing, instead deciding to further promote the newest season of Fuller House.


It sure would be nice if all of that turmoil just to basically exist resulted in Spectral being some kind of gem, a diamond in the rough, but it's actually one of the more instantly forgettable movies I've seen all year. The premise is proper is pretty basic honestly; some phantom.ghost creatures are attack U.S. soldiers in an abandoned European city. Clyne (James Bridge Dale) is a scientist whose created goggles that do in do fact do something; they allow soldiers to see the undead monsters that are attack people. Trapped in the abandoned city with no reinforcements, Clyne and a group of soldiers are gonna have to fight like hell to make it out alive.

Smushing together basic elements of supernatural horror movies and war movies could at least to some fun you'd think, but Spectral is a rudimentary motion picture, one seemingly intent on subjugating its audience to as much tedium as it can muster. The action sequences aren't all that fun, while the plot is structured around any given time where Clyne can create some kind of scientific deus ex machina that allows them to get one step closer to fully defeating their phantom adversaries. Because of that odd plot structure, there's no real tension in the movie, a flaw only exacerbated by how dreadfully inert every character in this movie is.

Even the worst "men-on-a-mission" war movies try to give one-note attributes to the various soldiers we're watching, Spectral can't even rise to that level of bare-minimum narrative competency. Every human being we encounter is a blank slate and dull as a rock and that includes our lead character, Clyne, played by James Bridge Dale who seems to be channeling the absolute worst performances given by Sam Worthington and Jai Courtney in his super bland turn here. Good luck trying not to doze off whenever Clyne comes on-screen, as the character is such a monotonous creation to spend 100 minutes with.

Tragically, Emily Mortimer and Bruce Greenwood are on hand to be utterly wasted in supporting roles though I suppose I should thank heaven for the minuscule favor that Mortimer's character doesn't end up as Clyne's love interest. Really, the only part of Spectral that doesn't get totally wasted is the visual effects team, who actually come up with a cool visual way to signify whenever the Phantoms are moving at accelerated speeds. That's actually a neat little trick, though the rest of the visual effects are ho-hum, culminating in a CGI-heavy battle climax that feels like it came out of some unholy mash-up of Mass Effect and Call Of Duty.

That big finale also carries some of the absolute dumbest (for lack of a better word) plot beats of the whole movie, as the film reveals just where these supernatural creatures came from. The explanation isn't even gonzo or weird enough to be memorably subpar, it's just like the rest of the movie, a dull slog with no real effort put into it. It's easy to see why Universal dumped this one off its release calendar and why even Netflix isn't giving it much of a promotional boost. Spectral is just a forgettable supernatural war movie that's about as entertaining to watch as its characters are compelling.

Posted by Douglas Laman (NerdInTheBasement) at 10:37 AM