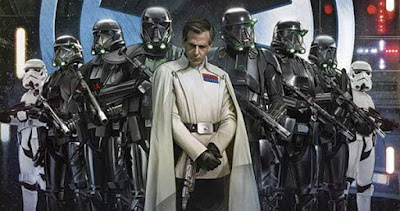 The Force was still strong with the Star Wars franchise as it leaped beyond traditional Saga movies (i.e. Episodes I, II, III, etc.) for the first time with Rogue One, which grossed a massive $155 million, the second biggest December opening weekend of all-time and the third biggest opening weekend of 2016 (only behind the bows of two superhero movies, Batman v. Superman: Dawn Of Justice and Captain America: Civil War). While down about 37% from the opening weekend of The Force Awakens last year, this debut is 7% ahead of the adjusted for inflation opening weekend ($145.6 million) of Star Wars: Episode III- Revenge Of The Sith from 11 years ago.

Anything with the Star Wars brand name affixed to it is bound to make some level of cash, but Rogue One managed to be particularly large in its debut thanks to both the extremely positive audience reception to last year's The Force Awakens (which ensured that people liked this franchise once again) and a strong marketing effort that emphasized a unique tone amongst Star Wars movies. Now, the question becomes, how well does this one hold over the holidays? December releases are interesting because their legs at the box office always fluctuate based on their release dates since the two week period designated for extended holiday breaks changes each year.

So, going back to the last time a big blockbuster opened on December 16th, we have to look at Sherlock Holmes: A Game Of Shadows, which bowed five years ago and opened to $39.6 million and did 4.7 times its opening weekend to gross $186.8 million. Rogue One has the ravenous Star Wars fanbase that came out in full Force (get it?) for opening weekend, so I doubt it holds that well, but it wouldn't be shocking to see it do something like 3.6 times this large opening weekend and end with a domestic cume just north of $560 million. We shall see if it can do that in coming Holiday box office hustle and bustle.

Moana held solidly in the face of Rogue One, actually being the only film in the entire top twelve to decrease under 50% (not counting two films that increased this weekend thanks to majorly expanded theater counts). Moana grossed another $11.6 million this weekend, a 37% drop from last weekend that's similar to the 39% fourth weekend dip experienced by Tangled six years ago. Moana has now grossed a fantastic $161.8 million domestically.

Office Christmas Party had a surprisingly large drop this weekend for a Yuletide-themed comedy, going down 50% to gross another $8.4 million, bringing its 10 day domestic haul to $31.5 million. Yeah, Rogue One opened this weekend, but plenty of movies in the top ten held well and it is kind of shocking that an R-rated comedy (a completely different kind of movie compared to Rogue One) couldn't hold better. Maybe there's just not good word-of-mouth surrounding the title. With Christmas and the release of R-rated comedy Why Him? fast approaching, Office Christmas Party's days may be numbered.

While Rogue One soared, Collateral Beauty failed to get off the ground, grossing just $7 million on opening weekend, the first time ever a Will Smith starring movie has opened below $10 million. Collateral Beauty had a disastrous marketing campaign that seemed to only confuse viewers and disastrous reviews ensured that adults seeking dramatic fare would go to the far better reviewed Manchester By The Sea and La La Land instead. While the extended holidays will give it a minor boost in the days to come. Collateral Beauty will likely ends it domestic run in the neighborhood of $30-35 million, a poor result for the $36 million budgeted movie.

Rounding out the top five was Fantastic Beasts And Where To Find Them, which felt the brunt of Rogue One for sure as it dropped 52% to gross an additional $5 million. That's a much larger fifth weekend decline than any of the Hunger Games sequels at the same point, and one of those had to compete with the much more financially formidable December-released Star Wars movie The Force Awakens! Fantastic Beasts has now grossed $207.7 million in 31 days and should be headed for a final domestic cume between $230 and $235 million. It's also worth mentioning that this film cracked
$500 million overseas this weekend, a most impressive achievement.

Two highly well-reviewed movies expanded their theater count significantly this weekend, particularly Manchester By The Sea, which expanded into 1,208 locations, the first time ever Roadside Attractions has brought a motion picture into more than 1,000 theaters. It seems such a theater expansion is paying off as the film grossed a great $4.1 million this weekend for a $3,400 per theater average. Manchester has already grossed $14 million domestically (making it the fifth highest-grossing movie ever for Roadside Attractions) and the extended holiday break hasn't even begun. Looks like this one's headed off to strong financial returns to say the least. Meanwhile, La La Land was quite impressive as it went into 200 theaters, grossing $4 million for an eye-popping $20,100 per-theater average. The films already grossed $5.2 million domestically before it expands into wide release on Christmas Day where it looks all but guaranteed to break the bank.

Arrival had its first real major weekend-to-weekend plummet this go-around, going down 50% to $2.7 million to bring its domestic cume to $86.5 million. Doctor Strange also had a larger than usual drop, going down 55% to gross another $2 million. Compared to past early November blockbusters, that's a bigger seventh weekend decline than the 52% one experienced by Thor: The Dark World but way better than the 64% plummet experienced on this same weekend last year by Spectre. Doctor Strange has now grossed a strong $226 million domestically. Nocturnal Animals rounded out the top ten with $1.3 million, a 56% drop from last weekend that brings its domestic gross to $8.8 million, meaning it'll surpass the $9.3 million domestic gross of director Tom Ford's last movie, A Single Man, within days.

Right outside the top ten was Trolls, which grossed only $1.3 million this weekend, a 57% drop from last weekend. That's a way better seventh weekend drop than the 80% one seen by The Peanuts Movie on this same weekend last year, but that's the extent of the praise one can offer this drop. Trolls has now grossed $147.3 million and will likely have another severe drop next weekend when Sing arrives. Allied, meanwhile, plummeted a massive 68% this weekend, grossing $1.2 million and bringing its domestic haul to an underwhelming $38.4 million. Hacksaw Ridge, in thirteenth place, had by far its biggest weekend-to-weekend drop this frame as it lost 936 theaters, going down 61% to gross another $895,000, bringing its domestic gross to $62.7 million.

Jackie further expanded its theater count this weekend to 84 locations and drumming up $550,000 for a per-theater average of $6,548. This one seems to be slowing down quicker than expected and it's difficult to see it achieving much mainstream box office success if it doesn't garner more high-profile awards attention. Miss Sloane plummeted 75% in its second weekend of wide release, grossing only $460,000 at 1,463 theaters for a per-theater average of only $314, bringing its domestic cume to only $3.1 million. Looks like this will easily become the lowest grossing wide release ever for Jessica Chastain.

It's worth mentioning, on the limited release circuit, that Moonlight had the fourth smallest dip (excluding films like La La Land or Manchester By The Sea that increased from last weekend) for any film at the box office, going down 26% to gross another $400,525. Moonlight has now made $11.5 million in its nine-week long domestic run. Meanwhile, Lion just hasn't been able to muster too much of a roar in limited release, as it grossed only $130,539 at 16 locations for a per-theater average of $8,159 for a domestic total of only $702,000. Maybe the extended holiday break and/or award season will boost its domestic box office sum, but right now it's looking like yet another major 2016 Weinstein Company box office dud. Finally, Fences was able to gross a solid $128,000 in its opening weekend in 4 theaters for a per-theater average of $32,000.

The top twelve movies this weekend grossed $204 million, the fourth biggest December weekend of all-time, however, down a whopping 33% from this same weekend last year when Star Wars: The Force Awakens began its record-breaking box office run.
Posted by Douglas Laman (NerdInTheBasement) at 11:02 AM