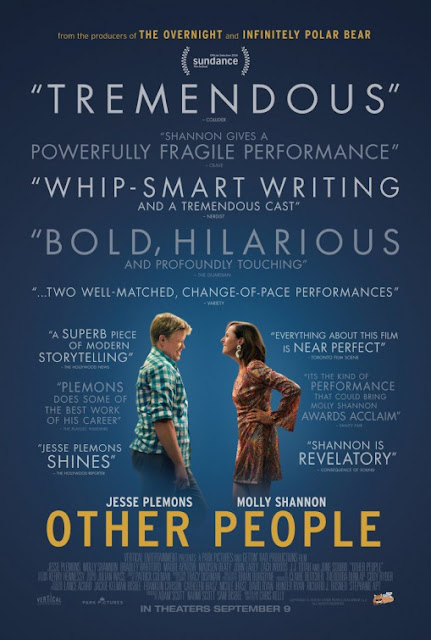 While the concept of coping with grief or the deathly sickness of a loved one is a fairly universal concept, we all process this experience differently by way of our own individual personalities, outlook and the kind of relationship we had with the person who is departing us now similarly plays a notable role in the way we cope with our grief.  For David Mulcahey (Jesse Plemons), the lead character of Other People, life wasn't going too smoothly even before he had to come to take care of his mother, Joanne (Molly Shannon), whose cancer is giving her mere months to live.

A spec script David sent into Comedy Central got rejected and he and his longtime boyfriend recently parted ways, all that kind of stuff would be a heavy emotional weight for anyone to carry. Now that he's also got his mom to worry about, he's settling into his old hometown again as well as trying to cope with his disapproving father and get any sort of writing done in the interm. The film takes place over an entire year with each of the twelve months getting a short segment to themselves focusing on Joanne's gradually declining health and the way David and his entire life react to that and other personal events of his.

Chris Kelly is the writer and director of this project, which is (if Wikipedia is to believed) actually based on his own personal experiences tied into the loss of his own mother back in 2009, while David's sexuality and occupation as a writer on Saturday Night Live are similarly based on Kelly himself. That would explain why the scenes with David and Joanne interacting work really well, it's not shocking to me that these moments are drawn from reality considering how well-handled they are. They don't get too showy or what have you, Kelly just goes for dialogue and on-screen actions that play off as an authentic representation of coping with the impending loss of a loved one.

Playing the cinematic surrogate for Chris Kelly himself is Jesse Plemons, a guy who I'm surprised hasn't been busier in his post-Breaking Bad career (though he was close to getting the role of Finn in The Force Awakens, for what it's worth). The solid work he puts in here in the lead role reiterates my idea that this guy should be in more demand than he currently is. There's a lot of internal anger stewing up inside David when he returns home, especially in regards to his dad's refusal to accept his sexuality and his recent break-up. Plemons does fine job showing David's genuine grief over the prospect of losing his Mom while making that internal strife also coming through in equally believable strokes.

A borderline revelation in the role of Joanne is Molly Shannon, pulling off a fantastic dramatic turn that I truly didn't expect to see. The gradual decline of her physical state is handled in a nuanced fashion by Shannon that evokes more tragedy by going for a more subdued depiction of the effects the cancer is having Joanne as a person. It becomes gut-wrenching to watch a more lively person deteriorate to her near-death persona by the end of the film. Shannon pulls it all off splendidly and it is very worth mentioning that the adept acting ability of both herself and Plemons get to shine when they share maybe the best scene of the movie towards the end of Other People.

While I wish Chris Kelly's directing skills were more distinctive, mainly because the films visual style feels very by-the-book  and there's some overly tidy storytelling in the ending that wraps things up just a bit too easily for the films previously established realistic aesthetic, these notable flaws are at least accompanied by some strong performances and a script that handles it dark subject matter with appropriate grace. Make sure to let, well, other people know of the virtues of the 2016 motion picture Other People.
Posted by Douglas Laman (NerdInTheBasement) at 3:02 PM