Incarnate's Gonzo Premise Doesn't Result In Much Scares Or Fun 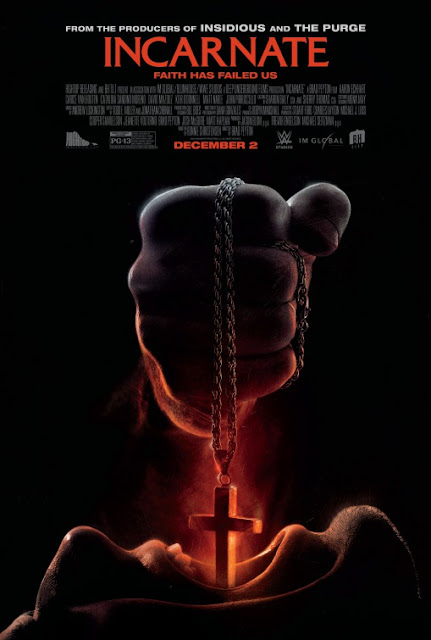 Incarnate is yet another modern day entry into the exorcism/demon possession horror film subgenre, something that's gained popularity from the likes of the Paranormal Activity movies, The Last Exorcism and The Devil Inside. However, Incarnate decides to throw in one helluva storytelling twist; religious methods will not be used to get rid of demons in this tale. Nope, instead, a person will travel into a possessed human beings mind and evict the demon out from within. That's certainly an interesting starting point for a horror movie, so it's a real shame Incarnate is a dud of a horror movie and way more boring and rote than its bonkers premise would suggest.

One of the most frequent users of this practice is Dr. Seth Ember (Aaron Eckhart), a man plagued by personal tragedy whose been doing this whole psychological exorcism game for a while now. He's now gotten word that a young boy has been possessed by a demon named Maggie whose responsible for killing his family in a car wreck, so he's got some personal stakes ridding the kid of the demon that's overtaken him. Maggie's a pretty strong demon though and she's not giving up her new human host without a fight.

The rote nature of Incarnate would be frustrating for any movie, but it's particularly aggravating here given what a uniquely bizarre idea it kicks off with. That idea of taking out demons inside one's mind offers plenty of gonzo opportunities for bizarre scares that the likes of Wes Craven or Clive Barker could have made entertaining and scary without blinking. Ronnie Christensen's script instead goes for the most routine plot turns, scares and character archetypes imaginable, robbing this film of any chance to stand out in a way fitting of its crazy initial concept. A chance to really let loose is eschewed in favor of just going for the rote and predictable both visually and storytelling wise.

Look no further for prime proof of how slavishly Incarnate skews to the hackneyed than the lead character Dr. Seth Ember, a troubled alcoholic fellow (he's never far from his trusty flask) with disheveled hair and wardrobe making him look like Zap Rosdower if that truck driver ever decided to become an exorcist. Ember is played by Aaron Eckhart, who decides to channel the voice his fellow Dark Knight cast member Christian Bale used for Batman for 95% of Ember's line readings, which Eckhart delivers in a way that ranges from "bored" to "hilariously inept". He becomes quite the repetitive lead character before you even know it and the tragic backstory that informs the character is just eye-rollingly "been-there-done-that".

Similarly lacking in anything remotely original are the supporting characters who inhabit their archetypical personalities (a goth kid helps Seth in his exorcist shenanigans while the kid whose possessed by Maggie also has the deadbeat father to beat all other deadbeat dads) with no trace of originality or even just a hint of memorable personality. That's what makes Incarnate such a frustrating movie to watch, one gets the feeling this movie could totally go in far more interesting or even just weird directions with its premise and/or characters, but it always decides to go down the road most boring.

To boot, if you're going into this movie just to get some quick scares, those are also in short supply. Not only is there an odd dearth of attempts at horror, anytime the element of horror rears its head here it comes in the form of a tired o'l jump scare. I suppose it would be out of character if the horror movie Incarnate broke its resistance to creativity for the scares, huh? Despite hanging its premise around a potentially interesting hook, Incarnate is just rote exorcism stuff. A total waste of potential that has a dire deficiency of both scares and innovation.
Posted by Douglas Laman (NerdInTheBasement) at 1:52 PM