Miss Sloane Is All About Immoral Means For Moral Ends 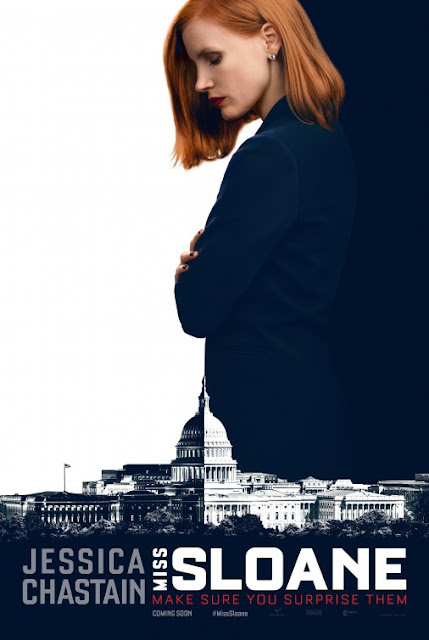 The world of politics is a slimy place, as this most recent presidential election has most certainly shown. It's a realm that earns scorn and disgust from many and it's a place where Miss Sloane decides to tell its story to quite entertaining results. This John Madden film does not sugar-coat ts depiction of the turncoat nature of this aspect of American society, instead plopping viewers right into the middle of morally dubious politicians and even have our protagonist be a human being whose got no qualms with doing things that redefine unethical in order to score another victory. That human being in question is the titular Miss Elizabeth Sloane (Jessica Chastain).

Miss Sloane is about as cunning as she is devious, she's never one to back down from a fight. And when she's given the chance to spearhead a women-centered pro-gun advocacy group, she not only rejects that proposal but puts her skill set to work as a pro-gun control lobbyist. The folks hiring her for this cause think they've got a miracle with Miss Sloane's new presence in the pro-gun control world, but she's bringing a tornado of chaos every which way she goes. There are no morals for Miss Sloane, simply paths to victory and paths to defeat. Whatever it takes to get down that road to surefire triumph, well, she's more than happy to do no matter the cost. If you think this is gonna lead to plenty of opposition from the pro-gun camp, well, you win a no prize!

I kept waiting in dread for Miss Sloane to introduce some dramatic contrivance to explain why the lead character was exactly why acts like she is, maybe some family trauma or perhaps some form of betrayal in the early days of career, something simple and easy to explain why she acts like she does. Instead, the film smartly just makes Miss Sloane's machiavellian personality simply who she is to her core. Depth is introduced into this character through other ways (namely in regular visits Miss Sloane has with an escort) but the fact that Miss Sloane as a character is allowed to just be the way she is without some sob-story undercutting her unscrupulous actions is so so refreshing to see. Plus, eschewing some convoluted origin story for Miss Sloane means any brief glimpses of humanity or vulnerability hit all the harder since they seem like concepts far far from removed from our protagonist.

But maybe the greatest asset Miss Sloane has as a character is Jessica Chastain, whose got a fearless drive in her performance that's exhilarating to watch. Whenever Miss Sloane walks into a room, you can practically feel Chastain's intimidating presence looming over oneself, while Chastain similarly equips herself exceptionally well to the dialogue of the movie that ranges from Aaron Sorkin-esque speeches (there's a tirade on muffins in one of the early scenes of the motion picture that's quite amusing) and aforementioned flashes of vulnerability with equal measures of high quality. Centering the whole movie around Miss Sloane and her pro-gun control lobbying could have made this movie a disaster if the actor playing the lead character had faltered, but nope, Jessica Chastain steps up to the plate and knocks a home run and then some in her performance here.

In the ensemble cast, one can spy something quite uncommon in the world of cinema...Mark Strong getting the chance to play a good guy! Wow, will the wonders of 2016 never cease? Strong is pretty good in his performance here, ditto for an antagonistic turn from Michael Stuhlbarg who plays a former colleague of Miss Sloane's turned mortal enemy. The best of the supporting turns is easily Gugu Mbatha-Raw as a pro-gun control individual with a traumatic past with firearms, primarily because of how well she plays off of Jessica Chastain. It's clear to see that Miss Sloane has got quite the impressive cast assembled here and it's splendid that the majority of them (though I could have used more John Lithgow) to their fullest abilities while not overshadowing the leading lady of the piece.

John Madden, coming off of two extended stays at The Best Exotic Marigold Hotel, is behind the camera on this one and his more OK but not outstanding visual approach as a director is probably the weakest asset of Miss Sloane, though even that aspect of the feature doesn't distract from what Miss Sloane gets right, most notably with creating an engrossing character whose immorality on Capital Hill is so much fun to watch. It's a serious shame Miss Sloane hasn't been receiving attention amidst the crowded slate of adult dramas opening in the last two months of this year, but take it from me, this is one entertaining political drama all about the cost of being immoral in the name of concepts deemed "moral".
Posted by Douglas Laman (NerdInTheBasement) at 8:31 PM