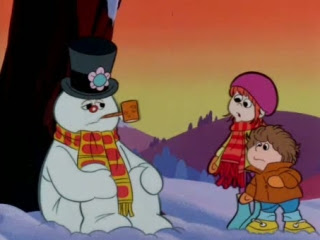 There are a select few of the Rankin-Bass Christmas specials that get trotted out every Christmas on CBS, ABC and Freeform to typical ratings success. Y'know, your Rudolph's, your Santa Claus Is Coming To Town's, all that good stuff. And then there's the majority of the duo's catalogue that attempted to cash in on the success of those big holiday-themed special titans and just never went anywhere. Nestor The Long-Eared Donkey is one, Pinocchio another and then there's this sequel to one of the biggest holiday specials of all-time, Frosty's Winter Wonderland. As Andy Griffith (who narrates this special) notes at the beginning of this special, you may know the tale of Frosty The Snowman, "...but do you know of [when] Frosty...took a wife??"


Frosty's Winter Wonderland takes place an unspecified amount of time since the first Frosty adventure. A new batch of kids (only Frosty and an easily startled police officer return from the first show) wish Frosty (Jackie Vernon) would come back into town, and lo and behold, as chilly weather comes pouring into the area, Frosty does return. However, Frosty passive-aggressively alerts the children that he feels lonely at night when they all go home and he's stuck out all alone in the cold wilderness. That's when these kids get a bright idea; let's make Frosty a wife! The narrator himself states that this new snow-wife is "built to frosty's exact specifications" which just opens up a whole new can of worms in terms of the moral implications of this story.

At the same time, Jack Frost is introduced into this universe as a figure jealous of all the adulation Frosty receives. Naturally, his immediate response is to remove Frosty's humanity by depriving Frosty of the hat that allows him to exist at all.Jack Frost is a very odd element to add into this special, but he's not very interesting, which is a common theme in this Christmas special. For some reason, so much is ditched from the original special (the lead girl from the original Frosty special, Karen, is not even referenced in this thing) and replaced by an overdose of fantastical elements that are neither as fun as their intended to be nor fun to watch in their incompetence.

For the record, Frosty's wife is named Crystal (Shelley Winters), whose abruptly brought to life by some magic flowers which are triggered by Frosty's teaser, a plot point that would be later stolen and rejiggered by the acclaimed 1999 motion picture Pokemon: The First Movie. It's far from surprising Crystal hasn't become a Christmas pop culture standard like her husband has given that both Shelley Winters voice work and the personality of the character just aren't that much fun. She basically exists solely to serve Frosty as a loyal mate (yeah, the creepy implications of her being created for Frosty are unavoidable) and she doesn't even have the amusing fish-out-of-water antics of her adjusting to normal human behavior when she first comes to life like Frosty did in the first special. She's just sort of there to be "the wife".

Well, that's technically not true, I guess she's also around to prove her devotion to Frosty is strong enough to power Frosty even when he doesn't have the hat. I suppose poor Karen sobbing over the melted remains of Frosty wasn't good enough to bring him back to life in the first Frosty The Snowman but some newfound snow-person he's known for a few minutes can. In case it's not apparent at this point, Frosty's Winter Wonderland just sort of romps around its fantastical scenarios while eschewing any sort of internal logic established by the very core of the Frosty The Snowman mythos. Hell, a Parson-Snowman is made to wed the duo, solely so they can tie this special into that one verse of Winter Wonderland that mentions "Parson Brown". Bringing in any sort of realism into this story in the form of following actual religious practices for marriages just highlights how little of this plot makes sense even by Rankin-Bass holiday specials standards. and all that, Above all else, it still feels weird that we can just bring snow-people to life now all willy nilly. It just robs some of the specialness of Frosty as a character I suppose, his uniqueness was a key trait in why the original song even had any resonance. Now we've got three talking snowmen waltzing around so what's so special about Frosty?

Like its predecessor, Frosty's Winter Wonderland is brought to life by the method hand-drawn animation instead of the stop-motion animation that's traditionally used for these Rankin-Bass projects. The hand-drawn animation is somehow a step down from the so-so visuals of its predecessor, all the characters move around in such a rigid and jerky fashion that gives off the impression that some key frames of animation are missing. It's a lackadaisical visual approach that's fitting for an oddball special like Frosty's Winter Wonderland that eschews any of the moderate charms of the original special in favor of just piling on nonsensical fantasy gobbledygook in favor of any sort of holiday cheer or fun.
Posted by Douglas Laman (NerdInTheBasement) at 10:34 AM