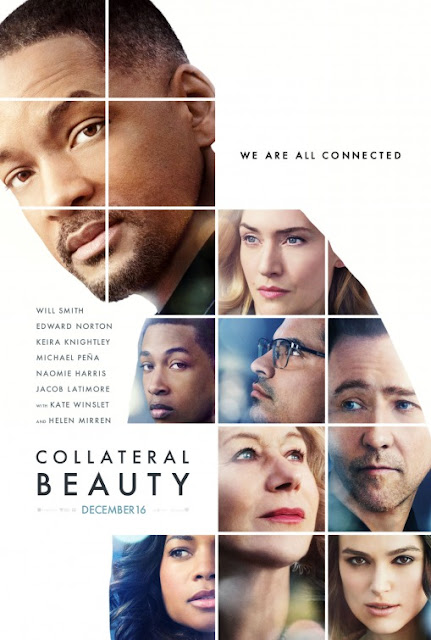 THIS REVIEW CONTAINS SPOILERS ONLY IN THE SENSE THAT THE ACTUAL PLOT OF COLLATERAL BEAUTY, WHICH IS REVEALED SUPER EARLY ON IN THE MOVIE, HAS BEEN HIDDEN BY THE MARKETING.

I have no idea what was running through the minds behind the people in charge of the screenplay and initial concept for Collateral Beauty, but good Lord, but I can only assume they had some disturbing thoughts rattling around in their cranium that could only be worked out by way of writing up a script that dressed up its creepy and disturbing plot in the guise of an inspirational feel-good weepy drama. That's the only reasonable explanation I can concoct for what Collateral Beauty even exists, because if human beings actually thought this was gonna work as a straightforward inspirational drama, well, they're very optimistic, I'll give them that.


In his newest misguided attempt to replicate the success of the Christmas-released inspirational drama The Pursuit Of Happyness, Will Smith plays Howard, a guy whose previously happy life has been an endless hole of sorrow since his daughter succumbed to cancer two years ago. For basically its first half, Collateral Beauty is not focused on him and what he's going through in regards to coping with the loss of a child. Nope, Collateral Beauty is instead about three of Howard's co-workers, Whit (Edward Norton), Simon (Michael Pena) and Claire (Kate Winslet), who are all worried because Howard's withdrawn self is about to lead his company into a tailspin and threaten their jobs.

Like any reasonable human being, Whit hires a private investigator to follow Howard around and steal some of his mail, revealing that the one way he's processing the loss of his child is by writing anger-filled letters to the concepts of love, time and death. Also like any reasonable human being, the trio of co-workers then conspire to hire three actors to portray human manifestations of these three concepts to interact with Howard. The plan from there is to film Howard interacting with the three actors, digitally alter the footage to remove the actors and then present the resulting footage to Howard's higher-ups to prove he's not mentally stable to carry a high ranking job at his company, thus saving Whit, Simon and Claire's jobs.

Yes, this is the actual plot of the film, I am not embellishing anything, the central premise of Collateral Beauty is three people attempting to make a grief-stricken man look mentally unstable. And it's all played out as if this is some sort of fool-proof recipe for soul-stirring inspirational cinema, when it really just comes across like an overly cruel tone-deaf premise for Hallmark movie written by a sociopath. The dissonance between the overly creepy premise and the schmaltzy "Aw, gee whiz" execution only furthers how sinister this movie is, especially since it frames the three people conspiring against this grieving father as lost souls for whom the three actors can impart treacle-soaked wisdom upon.

This feature really believes I'm gonna be emotionally invested in Whit after all the BS he's pulling on the protagonist, not to mention the fact that he also cheated on his wife and caused his family to break up?  Why is this movie so intent on trying to wring a poorly done maudlin storyline out of such eldritch human beings? The films moralistic view of the world is so overly simplified (there's no personal problem too great that it can't be solved with a memorable witticism or an extended monologue) that it probably would have been awful with any group of characters, but putting such a one-dimensional perspective with an outright disturbing storyline like this makes your skin crawl instead of your heart sing.

Putting aside the inescapable truth of how disturbing this movies story is, there's still plenty of faults to be found in Collateral Beauty. For one thing, Will Smith feels woefully miscast actually in the lead role, his idea of conveying inner pain in a physical way is just to let grey hairs grow in a bit. He looks more like he's going through a bad hangover rather than actually getting across the tremendous emotional burden his character should be carrying. Smith's usually at his best, even in his more down-to-Earth drama roles like in movies such as Concussion or The Pursuit Of Happyness, where his natural charisma can be channeled into fierce determination, but that asset doesn't get to be used here, and, unfortunately, he doesn't bring any other notable acting chops to compensate for the loss of that aspect of his personality. The ensemble cast is filled out with majorly talented actors who all deserve better than this, hell, everyone deserves better than the incomprehensibly loathsome Collateral Beauty.
Posted by Douglas Laman (NerdInTheBasement) at 7:19 PM