You Should Press Pause On Passion Play 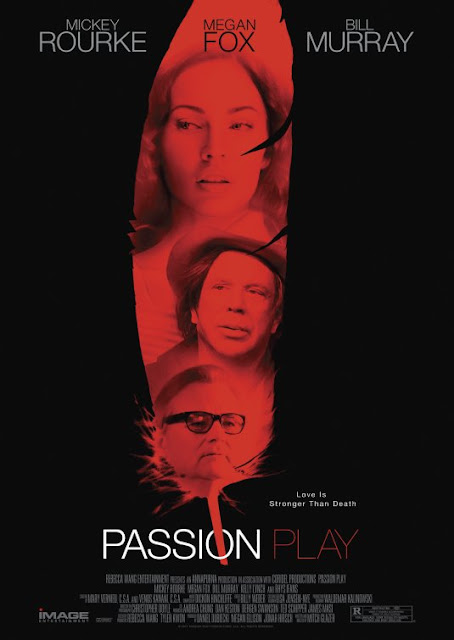 Back in, oh, I'd say...2010, I say an image from Passion Play in an issue of Entertainment Weekly with the publication promoting said image as "an exclusive first look" of an upcoming movie starring then-recent Oscar nominee Mickey Rourke and one of the lead characters of the Transformers movies. I simply assumed from that moment on that Passion Play would be a high-profile release only for the feature film to vanish off the face of the Earth afterward. It received a small May 2011 theatrical release in two locations that summoned up a massive $3,669 domestic gross and five years later I've finally managed to watch this movie.

Passion Play stars Megan Fox as a woman with feather laced wings sprouting out of her back named Lily. Despite such an astonishing physical feature, she is not the main character of this story. No, that honor goes to Nate (Mickey Rourke), a down on his luck trumpet player who is about to be executed in the desert before he is saved by a group of Native Americans. This group of Native Americans is never seen or heard from again. Then he stumbles around the dessert a bit before he happens upon a carnival where Lilly lives as a part of a "Freaks" exhibit. He busts her out of the place and the two develop a bond, though Nate has a plan to trade her off to a gangster named Happy (Bill Murray) with whom he owes a mighty debt.

The first fifteen minutes or so of this movie has a few moments that set up expectations that could never possibly be met. You've got Rhys Ifans chewing the scenery in his brief role as the owner of this carnival that seems to have wandered off from a Tim Burton movie. Then you have Megan Fox delivering lines of dialogue like "I'm a bird-woman" completely straight-faced and then randomly driving a truck through a tent to save Nate's life (that scene also includes a weird moment where it seems go from night to day in the span of only a few minutes). While the rest of this portion of the film is certainly dull, these glimmers of bizarre terribleness seems to promise at least some sporadic entertainment but then the movies swerves from Unintentionally Hillarious Avenue directly onto Boring Boulevard for the rest of its running time.

Honestly, the main problem Passion Play has that keeps it from working at all is that Lily is such a passive character in the plot despite her status as a bird-woman raised in the world of a carnival (that aforementioned Rhys Ifans carny raised here) seemingly having a lot of dramatic potential. Instead, she's always at the mercy of either the protagonist proper Nate or the villain of the story Happy, never getting the chance to spread her wings (no pun intended) and actually contribute to the plot in a meaningful way.

It's a pity too because Megan Fox, despite delivering a good chunk of her lines in a very flat way, is still giving the best performance here especially compared to Mickey Rourke's vacant performance and Bill Murray constantly looking like he's about ten seconds away from dozing off. If only she got to drive more of this story instead of Nate, whose character arc in this film is basically a hodgepodge of every "down-on-his-luck-bum" story you can imagine. Of course Nate used to be a notable musician, of course Nate is in trouble with some mobsters and of course Nate, in his darkest moment in the plot, turns to drinking and sleeping with tattooed strangers. All of these rote plot points couldn't be executed in a more trite manner and Mickey Rourke's stagnant acting in the role nowhere near compensates for the lack of storytelling innovation in his characterization.

Mitch Glazer (who wrote the Bill Murray movie Scrooged early on in his career, likely explaining how in the hell this movie managed to nab Bill Murray) makes his credited directorial debut here in addition to penning the screenplay whose recurring motif of a single feather (one guess as to where said feathers frequently come from) sort of epitomizes the overly obvious nature of this motion picture. Despite having some talented people in here, Passion Play is let down big time by the lack of subdued elements in its story, characters, performances and basically every other element you could think of.


Posted by Douglas Laman (NerdInTheBasement) at 9:31 AM