Suicide Squad Is An Exhausting Catastrophe 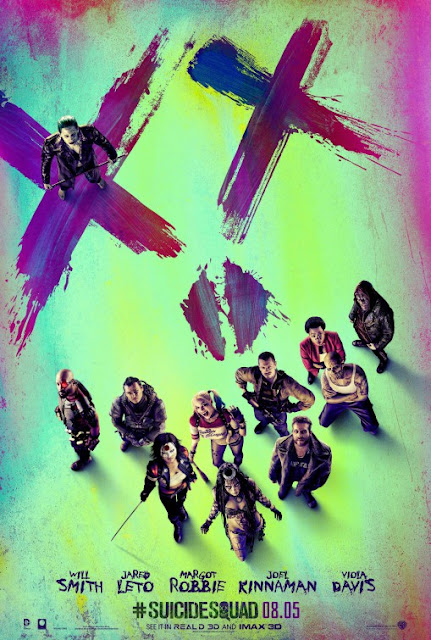 Suicide Squad is practically begging its audience to recognize how hip, how edgy, how fresh it is. By the time the credits roll, its pervasive desire for its audience to recognize just how "cool" it is left me beyond weary. Here's the weird thing though; despite Suicide Squad constantly pleading with its viewer to notice how "bold" it is through its music cues, certain pieces of "edgy" dialogue and how violent its main characters are, it's a seriously by-the-numbers production. Once the actual plot gets going, it practically goes through a checklist of well-worn storytelling tropes regardless of if they actually fit organically into the plot or not. Here's how much of a misfire Suicide Squad is though; that grave narrative shortcoming is one of its lesser problems.


The saga of the Suicide Squad begins with two brief scenes introducing Deadshot (Will Smith) and Harley Quinn (Margot Robbie) in solitary confinement. Then, we get to meet Amanda Waller (Viola Davis), to the tune of Sympathy For The Devil, introduce a big bold idea to her associates; she wants to assemble a task force comprised of incarcerated supervillains. From there, she introduces her colleagues to the various supervillains she plans to use for her own gains, including the previously seen Deadshot and Harley Quinn as well as individuals like El Diablo (Jay Hernandez), Captain Boomerang (Jai Courtney) and a soldier that will watch over the group, Rick Flagg (Joel Kinnaman). These character get extended vignettes, with narration from Waller, to introduce themselves that absolutely go on forever and don't really tie into any themes or characters that will be presented later.

There could have way more efficient and entertaining ways to convey these characters backstories and problems without having to resort to Viola Davis basically lecturing the audience on obvious ideas like "The Joker is crazy". But if we didn't do these extended flashbacks, I guess we couldn't have a two individual Batman cameos because Batman has to be in every DC Comics movie ever made. Anywho, from there, Viola Davis explains her plan to assemble this team again, this time to a room full of Government official at the Pentagon, and then, finally, the team is assembled. After a brief scene that doesn't really allow any of them to bounce off each and establish distinct character dynamics, they're sent off to go handle a threat in Midway City that is being perpetrated by The Enchantress (Cara Delevingne) and her brother, who looks like The Destroyer from the first Thor. Things are complicated by the fact that The Enchantress is possessing the body of a woman named June Moon, who Rick Flagg is in love with. We know they're romantic with each other not because of how the two characters interact or subtle body language but because Amanda Waller tells us, the audience, so.

As you can clearly see, there is a ton going on in this movie and I haven't even mentioned other members of the Suicide Squad like Killer Croc (played in excellent make-up by Adewale Akinnuoye-Agbaje) and Katana (Karen Fukumura), though maybe it's OK that I skipped those two individuals specifically because Suicide Squad never gives them anything to do. Basically, there's no real depth in these characters whatsoever. In fact, the climax of this movie tries to be a typical "We've-learned-to-work-together-to-fight-bad-guys!" finale, but the lack of a real dynamic between the various members of the Suicide Squad makes that impossible to believe. Hell, Harley Quinn and Captain Boomerang left the team the first chance they got (and Boomerang returns for...no real reason honestly)! It's a recurring problem in the script where things just sort of happen because the movie wants it to, regardless of if it fits into the story organically in any way shape or form.

Suicide Squad is chock full of decisions that feel poorly thought-out, but none of them are as dismally handled as Harley Quinn and her relationship with The Joker (Jared Leto). Harley Quinn is a character whose rich with potential for interesting storylines, but the movie just makes her an object for the character to constantly ogle (she spends the 3rd act of this movie in a white T-shirt soaked in water) as well as the centerpiece of a romance that feels astonishingly tone-deaf. Suicide Squad plays up the romance between these two as just downright adorable, why The Joker is practically a clown casanova! We're even supposed to feel sad when something bad happens to him as he tries to rescue Harley Quinn! Never mind the fact that The Joker is a psychopath that's shown to psychologically torture Harley and does countless heinous acts of violence towards people. What a bizarrely oblivious storyline that really has no impact on the movie itself.  But hey, giving this plotline any sort of thought or handing Harley Quinn any sort of individual agency would have made her an actual character and not just eye candy for the camera to slobber over.

It doesn't help that the only saving grace of this movie's version of The Joker is that he doesn't get much screentime. If Jack Nicholson's Joker was a way to embody 80's excess and corporate greed (why else would cosmetic products be part of his evil plans?) and Heath Ledger's Joker was a personification of the unpredictable chaos everyone was worried would be coming in a post-9/11 world, Jared Leto makes his Joker repulsive in all the wrong ways. Needless to say, Jared Leto's Joker is not menacing, he's just an eye-rolling exercise in what happens when over-the-top details (like that "Damaged" forehead tattoo that makes this version of The Joker impossible to take seriously) become a substitute for an actual character. Congrats DC Comics movies, you've managed to turn two of your best antagonists (Lex Luthor and now The Joker) into hideous abominations.

Truth be told, Will Smith and Margot Robbie are decent as the two lead characters of the movie. Neither one gets much to do (even in the supposed "action-packed climax", El Diablo is the one who does 98% of the important stuff), but they do get some humorous moments. Will Smith certainly does know how to time his quips just right, no denying that, while Robbie thrusts herself into the severely underwritten part with extreme gusto. Meanwhile, Academy Award winner Viola Davis is basically around to toss out exposition and then serve as a damsel-in-distress that the Suicide Squad have to rescue in the climax. Poor Viola Davis. At least she can comfort herself in knowing she's far from the only actor to get nothing to do here, hell, Cara Delevingne as The Enchantress just stands in one room (for some reason, her Enchantress attire solely consists of a goofy looking crown and a metallic two-piece bikini) for most of the movie as the big bad guy the Suicide Squad must stop.

And then there's the soundtrack, which is clearly aping Guardians Of The Galaxy in its decision to play mostly classic rock music (Though a few modern tunes like Black Skinhead by Kayne West sneak in) over various scenes. But whereas the Guardians soundtrack was a bold way to establish that movies distinct identity and unique energy, the songs in Suicide Squad are rote choices that have cropped up in plenty of place before (this is most notable true when it comes to the songs Fortunate Son, Sympathy For The Devil and even a tune from the Guardians soundtrack itself, Spirit In The Sky) that are yet another sign that this movie cannot find a way to create its own sense of individuality. Hell, that's the exact problem that sinks the climax of Suicide Squad, which concerns The Enchantress using a big mystical machine to destroy the entire world. A big laser-and-lights show just doesn't seem like the proper finale for this story at all (shouldn't a group consisting of a woman with a bat and a dude who throws boomerangs be fighting, like, weapons dealers or something and not big apocalyptic foes like this?), but whatever, by the time said climax arrived, I was too beaten down to care. Suicide Squad makes it perfectly clear that all it's got an interest in is cribbing ideas and concepts from better movies while aggravatingly parading around its own sense of misplaced uniqueness. This isn't so much a movie as it is a tour guide through te mind of a Hot Topic obsessed 7th grader who just got rejected by a girl. Suicide Squad is a cinematic cataclysm that left me quite frustrated and equally annoyed.
Posted by Douglas Laman (NerdInTheBasement) at 9:50 AM