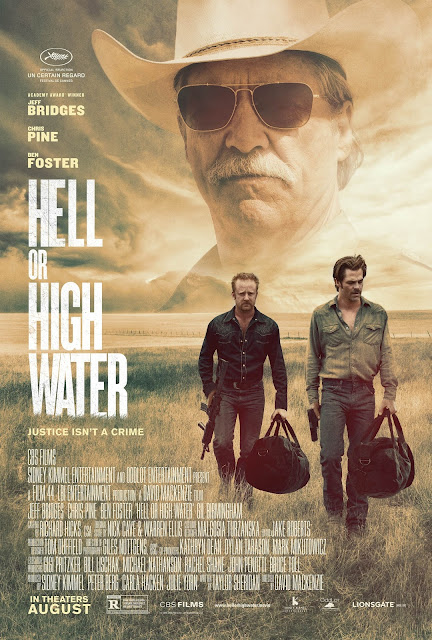 It's always nice to see movies that actually understand Texas and don't treat it like some idyllic postcard that's an ode to "the good o'l days". Instead, Texas as depicted in Hell Or High Water is very much true to life, full of people struggling to make the ways of farming work in the modern day world (one dude who's trying to wrangle his cattle during his thunderstorm jokes about how he wonders why his kids don't wanna do this job), red Coke cups in every diner and those smaller towns that aren't just an anomaly in America but even in Texas itself which is, in 2016, dominated by bustling metroplexes.


Deep in West Texas, in one of these small towns, two brothers, Toby (Chris Pine) and Tanner (Ben Foster), rob a bank in the name of vengeance against a chain of banks that have done their now deceased mother wrong. Tanner, having spent a decade in prison, is the bad boy of the duo, having a lot of experience with robberies and getting an adrenaline high off of committing crimes while Toby is more of a straight-shooter, having no prior crimes to his name. The duo's bank robbing activities draw the attention of law enforcement rangers Marcus (Jeff Bridges) and Alberto (Gil Birmingham), with Marcus, whose only a short time away from retirement, particularly keen on taking the two bank robbers (whose identities remain a mystery to the general public and to these two rangers) to justice.

My primary thought after leaving Hell Or High Water was solely "Oh man is it good to see Jeff Bridges in a good movie again." Between this and The Little Prince, 2016 is proving to be the year where Bridges reminds us all what a damn fine actor he is. Few actors can embody the world-weary Southerner like he can while also ensuring that each character he plays that fits into that specific archetype manages to be distinctive in its right. Rooster Cogburn from True Grit and Marcus from Hell Or High Water both allow Bridges to fit into the aforementioned world-weary Southerner persona, but there's plenty of thematic differences between the two both in terms of how they're written and performed by Mr. Bridges.

Marcus is more of a spry individual in personality and determination in his job nicely contrasting with his older age which Bridges emphasizes in the physicality of his performance to exude a sense of vulnerability  underneath the can-do spirit he delivers in the dialogue. Meanwhile, Chris Pine, like Andrew Garfield in fellow "rage-against-the-banks" move 99 Homes, manages to eschew his conventional hunky leading man persona without a hitch with Pine doing an impressive job embodying a more schlubby Southern everyman. And good heavens, Ben Foster is a revelation in his turn here. He and Pine not only have great chemistry but Foster is able to turn his characters compulsive desire to be one the run from the law into something both tragic and menacing.

Despite directing motion pictures for over two decades now, I freely admit to being unfamiliar with director David Mackenzie's work prior to Hell Or High Water. While I'm unable to say how the feature fits into his larger filmography, it is easy for me to say that he shows some solid chops in the director's chair, knowing just when to go for more splashy camera tricks and filming methods (a 360 degree camera pan opens the movie that allows the audience to get a good look at the run-down small town that the first bank robbery takes place in) and when to go more restrained visually and just let the characters and dialogue flow.

I will say though, I don't know if it was Mackenzie or screenwriter Taylor Sheridan that came up with the soundtrack for this movie, but I wish there was a little more variety in the songs that play over certain scenes in the movie, because if you've heard one of the many mournful Western tunes Hell Or High Water offers up, you've kinda heard 'em all. Unlike the slightly repetitive song choices, the script for Hell Or High Water is a strongly conceived creation that lets the themes and characters prosper in an environment that's concise and emotionally fulfilling. This motion picture really understands the value of uncluttered storytelling just about as well as it understands the real nature of small Texas towns.
Posted by Douglas Laman (NerdInTheBasement) at 8:23 AM