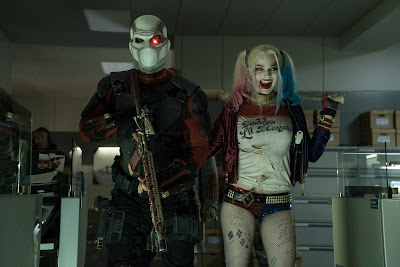 The bad guys of the DC universe had a, well, bad second-weekend dip as the Suicide Squad faced off against poor word-of-mouth and competition from three new titles in their second weekend of release. Suicide Squad had one of the sharpest second-weekend declines for a major superhero movie on record, losing 67% for a $43.7 million second-weekend cume. That's a better second-weekend decline than Batman v. Superman and last year's Fantastic Four debacle and slightly larger than the ones experienced by Kick-Ass 2 and X-Men: The Last Stand. It's pretty apparent that Suicide Squad is really not resonating with audiences, though at least the Labor Day holiday weekend in three weeks could get it barely past $300 million domestically provided it doesn't sink like a stone in the next two weeks (which isn't our of the realm of possibility). Suicide Squad has now taken in $222.8 million domestically and a strong $465.3 million worldwide.

On the other hand, Sausage Party made a tidy sum of cash this week, debuting to $33.6 million. This R-rated animated comedy managed to be the seventh biggest opening weekend of Seth Rogen's career as an actor and narrowly beat out The Green Hornet to become his biggest film ever as a writer. Having a distinctive premise (it's an R-rated PIXAR movie!) in its advertising certainly helped this one stand-out in the marketplace while the cast jam-packed with recognizable names and strong reviews only boosted this film's profile. Comedies tend to hold quite well in August (just as We're The Millers and Let's Be Cops) so Sausage Party has a good chance of sticking around at the box office in the weeks to come.

Pete's Dragon fared OK in its opening weekend, but it was far from the sleeper hit many thought it could be, opening to only $21.5 million. That's fine for a remake of a relatively obscure 1970's Disney family movie and considering its cost of $65 million, but Disney has not only seen far better results for major family movies, they've even seen better opening weekends for cheaper August family fare like the $22.2 million bow of Planes. If Pete's Dragon follows the trajectory of Planes in the weeks to come, it would gross $88 million domestically, a decent but not as big as it could have been sum for this family feature.

Jason Bourne regained some composure after its massive second-weekend decline last weekend, losing only 39% in its third frame to gross another $13.6 million, bringing its domestic total through 17 days to $126.7 million. David Webb should have no trouble crossing $150 million domestically, a box office sum that is not worse than Snowden. Bad Moms was the real box office talk of the town this weekend if you ask me, dipping a tiny 18% to gross another $11.4 million to bring its domestic gross to a sizable $71.4 million. Looks like Bad Moms is definitely gonna get over $100 million in its domestic run, a fantastic accomplishment that makes it one of this summers few run-away box office hits.

Actually, with no big new release this weekend grabbing up movie theater screens and attention, most of the holdovers held quite well over the past few weekends. One title that's been holding up super well over the past few weeks though has been The Secret Life Of Pets, which had another terrific hold this weekend (dipping only 23%) to gross another $8.8 million, taking its domestic cume to $335.9 million. By tomorrow, it'll have surpassed the entire domestic gross of Minions and it may just end up out-grossing Despicable Me 2 to become Illumination Entertainment's biggest movie ever. What a good boy this movie is. Star Trek Beyond also held well this weekend, dipping only 32% to gross another $6.8 million for a domestic gross of $139.6 million.

Florence Foster Jenkins did only OK business this weekend, grossing $6.5 million, a tad below the bow of Ricki And The Flash last year and slightly above the debut of Prime, in terms of Meryl Streep films. While it's doubtful this one cost that much, this still isn't the best possible opening this film could have had, especially since the tinier bow means it'll be hard for it to develop legs against the large amount of new releases coming out in the next two weeks.

There was no saving Nine Lives this weekend, which clawed up another $3.5 million in ninth place, a 44% drop from last weekend. Nine Lives has grossed $13.5 million in ten days. Rounding out the top ten was Lights Out, which continued to hold exceptionally well for a horror movie, dipping only 46% from last weekend to grab another $3.2 million to bring its domestic total to a strong $61.1 million.

Bowing in 452 theaters this weekend was Anthropoid, which grossed an OK $1.2 million for a per-theater average of $2,684. It's doubtful this one expands it theater count in the next week or two, but this is an alright sum for a more low-profile title like this one. Indignation brought its theater count to 267 locations and grossed another $804,815 for a per-theater average of $3,014 to bring its domestic total to $1.5 million.

A couple of new titles bowed in limited release this weekend with one release in particular pulling in some really strong numbers. Said release is Hell Or High Water, which bowed in 32 locations to a strong $592,000 at 32 locations for a per-theater average of $18,500. Great numbers right here, particularly given that the movie launched in a slightly larger amount of theaters than the typical 1-5 locations that most limited release movies start in. CBS Films/Lionsgate plan to expand the movie into wide release this Friday where it wouldn't be shocking to see the film continue to thrive.

Disorder also debut in limited release this weekend, bowing to $12,000 in 2 theaters. Meanwhile, Ghost Team got off to a lackluster start with only $9,205 from 10 locations, resulting in an anemic per-theater average of $921, one of the worst per-theater averages for any movie at the box office this weekend. Finally, The Lost Arcade debuted in a single theater and grossed $7,500.

The top 12 this weekend grossed $157.8 million, up about 16% from the same weekend last year when Straight Outta Compton exceeded all expectations to become a box office juggernaut.
Posted by Douglas Laman (NerdInTheBasement) at 1:15 PM