Eternal Sunshine Of The Spotless Mind Can Only Be Described As Beautiful, Profound And....Nice 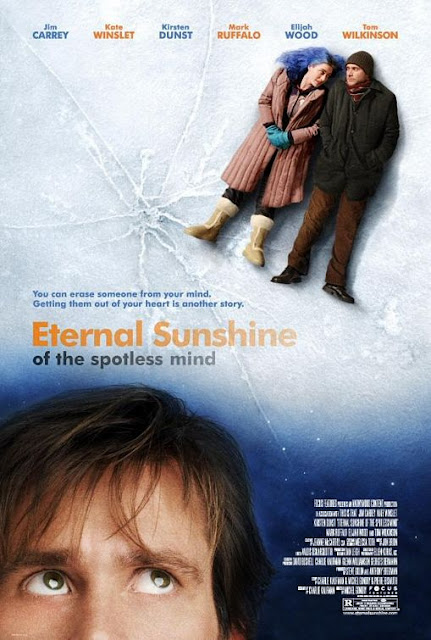 A lot has happened in the past six months for me but perhaps one of the most formative things that have transpired is that my opinion of Jim Carrey as an actor has been completely altered by watching movies like I Love You, Phillip Morris, The Truman Show and now Eternal Sunshine Of The Spotless Mind for the first time. Carrey is a truly talented individual with an incredible amount of range and I'd wager no other motion picture (despite Morris and Truman Show containing some top-notch work from Carrey) so eloquently shows off the level of talent Carrey is capable of commanding as Eternal Sunshine Of The Spotless Mind, a 2004 Michel Gondry effort that's really...well, something else.

Screenwriter Charlie Kaufman (the writer of Adaptation. and Synecdoche, New York) has a profound and introspective quality to his writing a trait that's equally consistent as the recurring presence of very high-concept elements existing in his stories in a mundane fashion. In Eternal Sunshine Of The Spotless Mind, the high-concept element in question is a business that has the technology to erase memories from your brain. If someone you love passes away or leaves you, you can just erase their very existence from your brain and no longer have to deal with the pain caused by their absence. For many, like Joel Barish (Jim Carrey), it sounds like an absolute dream come true.

Joel Barish is just getting out of a relationship with Clementine (Kate Winslet), a woman who just had this exact same procedure to erase memories of Joel from her mind. In a fit of rage, Joel decides to reciprocate the action and decides to have his memories of Clementine erased while he slumbers. But while he snoozes, he re-lives the myriad of memories he has with Clementine just as they're being erased and realizes the true ramifications of what he's doing.

We've all been where Joel is emotionally. Every human being deals with loss and it's not a pretty feeling to experience. Erasing such an emotion robs us of the chance to learn from this loss, to grow as human beings from it. What's that old Dr. Seuss quote? "Don't cry because it's over, smile because it happened." Easier said than done for sure, but it's such a true axiom. Eternal Sunshine Of The Spotless Mind is well aware of this truth, but it doesn't beat such an idea over the head of the viewer. Instead, Kaufman's screenplay is solely centered on Joel's journey through his memories and realizing what the true value of what he had with Clementine.

The dialogue in this movie is executed with the help of a duo that are so perfect together they're like the cinematic equivalent of peanut butter & jelly. Charlie Kaufman has penned some incredibly believable and entertaining dialogue while actors Jim Carrey and Kate Winslet have this wonderful chemistry that adds a valuable layer of authenticity to each sentence they exchange. And speaking of our two lead actors, good God, Carrey and Winslet are such crucial reasons for why this movie works as well as it does. Jim Carrey goes for a more restrained and introverted performance in his portrayal of Joel Barish compared to the two aforementioned performances in I Love You, Phillip Morris and The Truman Show that I've seen this year, but a softer character turns out to be one he can play like a fiddle.

What's interesting about his character though, from a screenwriting perspective, is how the movie doesn't play him as a faultless saint that's just too quirky for society or his ex-girlfriend to truly appreciate. Actually, Joel is more human than that, capable of having notable flaws and acting like a jerk to Clementine in the course of their relationship. Allowing visible cracks to be shown in Joel's armor makes him a super compelling character and a similar sense of realism permeates through Clementine as well. An unapologetic and impulsive individual, there's exceptionally lovable effervescence whenever Winslet is on-screen.

That's a personality that contrasts with Joel's more farouche tendencies and the level of astounding thought put into their relationship, combined with Carrey and Winslet having excellent chemistry, makes them an extremely believable couple. In fact, the last 15 or so minutes of this movie, detailing Joel coming to terms with the fact that the last of his memories of his time with Clementine are vanishing into the abyss, is just devastating to watch, especially since Carrey plays Joel's sadness in such a subdued but wise manner here. He realizes too late the value of the time he spent with Clementine, but there's nothing he can further do to prevent the erasure of these memories, so he decides to simply bask in the glow of the past for one last time. The dialogue Carrey delivers here is simply but effective, showing how much is character has come to melancholy terms with his ordeal. The subdued nature of this acceptance is just haunting, especially combined with the visual of a collapsing house that used to stand for idyllic times in the past.

I get chills just thinking about that extraordinary scene and so many other sequences in this amazing motion picture. There's so many moments in Eternal Sunshine Of The Spotless Mind that ring so true to the human spirit and genuine complex emotions of the real world, it truly staggers the mind. Hell, I haven't even discussed the visual look of the film that imbues a haunting emptiness into scenes where Joel is watching his memories crumbling around him. Director Michel Gondry has a truly extraordinary visual style that I'd love to see in more high-profile work like Eternal Sunshine and his underrated 2008 movie Be Kind, Rewind. And how about that supporting cast, including strong turns from Kirsten Dunst and Tom Wilkinson?

Plus, there's the non-linear form of storytelling that does no hand-holding with the audience in navigating this universe which really allows this plot to flow in an extremely organic manner. There's just so much in here to praise that I don't think one review can cover it. There's a true masterful quality to Eternal Sunshine Of The Spotless Mind that speaks wonder to the very essence of the human condition. This is a beautiful movie that has profound thoughts to share on the necessity of moments both emotionally soaring and painful in our lives. Do yourself a favor and watch this movie so you can absorb said thoughts as well as the countless top-notch aspects of this phenomenal production.
Posted by Douglas Laman (NerdInTheBasement) at 2:39 PM