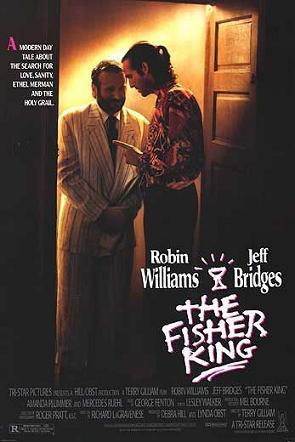 Two years ago this past Thursday, Robin Williams tragically passed away, leaving a massive hole in the world of entertainment that no other human being can hope to fill. The man was overwhelming in the level of talent he commanded and Terry Gilliam's The Fisher King is a prime example of how this was a guy who could create a bounty of varying emotions in his performances. There's plenty of laughs to be had in Robin Williams acting here, but there's also a tremendous amount of pain here that no other actor could have pulled off like Williams does.

Robin Williams actually does not play the protagonist of The Fisher King, no, that duty falls to Jack (Jeff Bridges), a radio personality whose self-centered nature makes him an obnoxious human being who see's other human beings as far far beneath him. Just when Jack starts to grate on the viewer, tragedy strikes his life; a lonely individual who called onto Jack's radio program earlier that Jack had treated poorly on the air has gone on a shooting spree before taking his own life. Jack's entire world is rocked by this revelation and three years later he's living a more quaint life as a video store thriving on booze and disdain for himself and the world around him.

One night, Jack discovers a man named Parry (Robin Williams), a man who lost his wife to the shooter that Jack dismissed on his radio show three years ago. Parry is now man grappling with a dwindling sense of sanity and is convinced that Jack has been sent to help him in his quest for the Holy Grail. Both Parry and Jack are grappling with the same tragedy that upheaved their worlds in different ways. For Jack, he's retreated away from reality, distancing himself from anyone who comes in contact with him. Meanwhile, Parry is an exuberant spirit who lives in flights of fancy to escape the terror that sometimes crawls into his brain. Their ways of coping differ, but their struggles have very clear parallels.

A lesser movie might have turned this tale and these character dynamics into pure schmaltz, but luckily, The Fisher King is not a lesser movie at all. In fact, it's one of the strongest depictions of mental illness I can recall in a mainstream American movie. Now, American cinema's depictions of people with mental illness has been...not great overall. Mostly, people with mental illness exist as supporting characters whose impairments are meant as a source of comedy and who solely serve as a way to prop up the lead character not suffering from mental illness. Now while it's true that Parry helps out Jack with his own problems, the two are more equal leads than a "hero/sidekick" dynamic in The Fisher King.

This film truly wants to dive into what makes Parry tick as a person, it goes deeper into his psyche to discover what he has to experience on a day-to-day basis with his condition. It cannot be stated enough how crucial Robin Williams is in making Parry work as well as he does. From the first time he appears on-screen as a knight in shining armor here to save Jack from some hooligans, he's a burst of energy and sincerity coated in pervasive tragedy as well as a sweet-natured temperament. It's all too easy to see how other actors might have taken this character and his myriad of emotions and just turned him into an erratic mess, but Williams, under the direction of Terry Gilliam, instead thrives charting the various sentiments Parry experiences in this tale.

Just look at how well he handles delivering his monologue to a woman named Lydia (Amanda Plummer) he's fancied forever. The various pieces of dialogue, which reveal that Parry follows Lydia during her day-to-day rituals, could have been creepy in another performer's hand. Instead, Williams deftly pushes the pedal on making this extended bit of dialogue as sincere as can be. It's beautiful to watch and proves that Williams is treating Parry as a human being, one with a soul and desires of his own, something that separates his turn as Parry starkly from the way other actors handle playing characters with mental ilness conditions. Terry Gilliam is the director behind this tale and he manages to be a solid guiding hand for the production and the way he handles the more heightened sequences told from Parry's perspective (such as Parry chasing an antagonistic knight through Central Park).

Jeff Bridges similarly works quite well as a counterpart to Williams, a tortured soul who is unable to embrace other human beings out of concern that he'll lose or harm them. The script deftly peels back the layers on Jack to reveal a kinder individual inside over the course of the story in a more subdued manner, knowing it'll be more realistic if this guy doesn't go from "Meiser" to "saint" in the span of one scene and that more gradual arc is one Jeff Bridges manages to excel in. Mercedes Ruehl and Amanda Plummer are also stand-outs in supporting turns particularly Plummer and the way she executes her characters more awkward physical mannerisms,

It'd be impossible for me to ignore the large amount of praise The Fisher King has received over the years, but seeing this feature for the first time I still found my expectations beaten thanks to a script that's so masterful at balancing both the harshness and beauty of the world, frequently merging both elements together in the very same scene. Having director Terry Gilliam onboard with that excellent cast led by an extraordinary performance by Robin Williams, doesn't hurt things either. Just as The Fool knew only that the King was thirsty, I know all too well that The Fisher King is an utterly fantastic movie.
Posted by Douglas Laman (NerdInTheBasement) at 8:25 PM