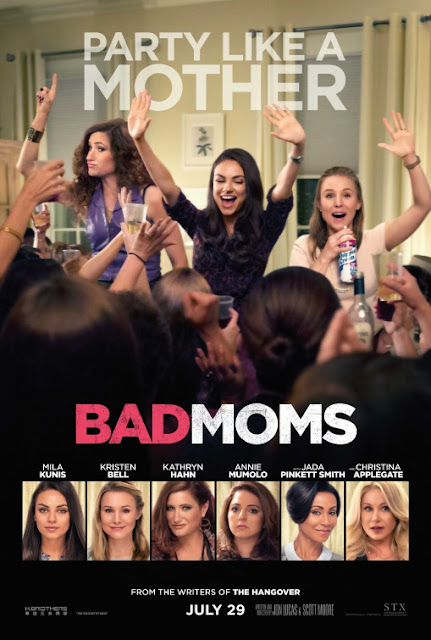 Summer 2016 has been filled with many cinematic misfires but Bad Moms may be the most tragic of the bad movies to emerge from this torturous season of moviegoing. I mean, this film has a superb cast and a premise that's practically oozing with opportunities for big laughs, but instead Bad Moms has a pretty dismal script that offers no chance for its myriad of talented performers to thrive nor the opportunity for the plot to fulfill its true comedic potential. Perhaps most damning of all, it's about as funny as the worst Adam Sandler movies.

Probably the most baffling flaw of Bad Moms is how convoluted its premise is. Bad Moms basically goes through a variety of situations that don't really have a ton of direct relation to each other and the individual plotlines aren't funny enough to compensate for the clunky narrative it's working with. Let me see if I can relay the basic framework of Bad Moms though just to give the review some context. OK, so, Amy (Mila Kunis) is an overworked mom trying to raise two kids and feeling underappreciated. One night, during a PTA meeting led by the antagonistic Gwendolyn (Christina Applegate), Amy snaps and decides she's done following all the strict rules society puts on moms.

She and two other misfit moms, Kiki (Kristen Bell) and Carla (Kathryn Hahn), decide to break the rules and become "bad moms". First off, it has to be said that the friendship between this trio just doesn't work, mainly because the actors don't seem to bounce off each other really well. This is partially because the script tries to push Kathryn Hahn's character as the break-out figure of the trio (like how Kate McKinnon and Zach Galifianakis were the break-out supporting characters of Ghostbusters and The Hangover respectively), but the jokes given to Hahn never go beyond her just spouting out synonyms for male genitalia. A well-handled dick joke can be quite funny, but just stating the word "penis" isn't enough to be funny.

The other problem with the trio is perhaps the most baffling flaw of Bad Moms; Kristen Bell gets nothing to do! Seriously, in all of her screentime she's either hanging out in the background or being berated by Hahn for her oddball tendencies. Bell doesn't ever get the opportunity to use her comedic chops she got to utilize to great results in past projects like Frozen or The Late Late Show With Craig Ferguson (go watch clips of her on that show, she's amazing on it, her feud with Geoff Peterson alone is enough to get me in a fit of giggles) and that alone is a travesty. But since a third of the trio this entire film is centered on is basically non-existent, that leaves Bad Moms with a severe character-related deficiency Mila Kunis and Kathryn Hahn can't compensate for.

It's also a movie at war with itself, as some brief partying from Kunis and her pals (none of which gets them in trouble with the law or publically embarrasses their kids) leads the two kids that Amy is trying to raise to abandon her for their dad in a "pivotal" emotional moment late in the film. It's obvious the film wants us to see that Amy's partying is tearing her family apart, but since the various "bad moms" antics we the audience have seen haven't really been that bad, it comes across more like the script (written solely by two dudes, Jon Lucas & Scott Moore) is saying "See what happens when you step outside of your responsibilities moms? You better conform to societies standards of what a mom is or else your family will fall apart!" This is a script that's begging to be the ultimate raunchy wish-fulfillment fantasy and instead it careens itself into reinforcing the status quo of what is expected of mothers after a few scenes of mild mayhem.

The aforementioned screenwriters of Bad Moms, Jon Lucas & Scott Moore, also serve as directors here and it appears their main visual traits as filmmakers is to utilize slow-motion as often as possible (seriously, slow-motion, like saying the word "dick", is not funny in and of itself, I cannot stress this enough) and to make every source of light in the feature, whether it's from neon signs in a bar or sunlight coming through a window, pervasively bright. It's a pretty terrible looking film from a cinematography and directing standpoint, which at least means the visual scheme of Bad Moms is consistent with its abysmal screenplay. Really, Bad Moms is a subpar production from top-to-bottom, which is a such a terrible shame. There was so much potential here, but all of it gets squandered in the name of a movie that's sorely lacking in humor or a script that works on any basic level.
Posted by Douglas Laman (NerdInTheBasement) at 10:05 AM