The Matrix Reloaded Goes Bigger Than Its Predecessor To Mixed Results 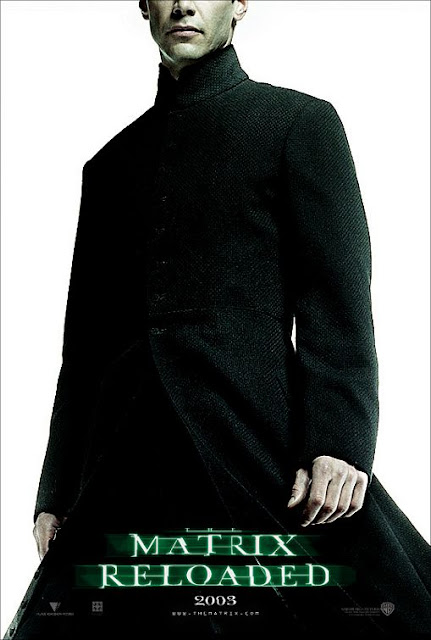 Like many sequels, The Matrix Reloaded has a burning desire to go bigger than its predecessor in every way possible. It wants to double down of the philosophical themes as well as provide more pulse-pounding action than you can shake a stick at. It's an admirable sort of ambition, the kind that runs deep through both the hits and misses in the filmography of The Wachowski Starship. But ambition on its own just can't quite sustain The Matrix Reloaded, which ends up falling quite short of the first Matrix movie.

This second Matrix tale begins with Neo (Keanu Reeves) and his comrades visiting the city of Zion, a place mentioned in the first movie that serves as a refugee for human survivors not trapped in The Matrix in the real world. This is where by far the best segment of the movie takes place, particularly in brief spots where various human survivors shower Neo with praise and gifts simply because of him being "The One". Reeves does a good job conveying his character's discomfort with his new position of privilege and it's an interesting route to go with the character now that his stature as "The One" is solidified.

But then the story proper has to get going and from there it becomes a mishmash of characters rambling about things like choice and purpose to the point where I wished the movie would just get on with its plot instead of forcing the audience to sit through an unengaging lecture. The weighty themes of the first Matrix went hand-in-hand with interesting visuals, entertaining character dynamics and basic human emotions. In The Matrix Reloaded, extended sequences devoted to loftier philosophical concepts are here simply because the presence of such content in the first Matrix resulted in well-deserved praise, so they better double down on such stuff in the sequel.

I do, however, prefer the tedious philosophical content in comparison to the overlong action sequences which are blatantly missing the characterization that made the first movies action scenes so riveting. Actually, the biggest problem with the action stuff is that, for many of these scenes the bad guy the various characters are facing off against is a resurrected Agent Smith (Hugo Weaving), who, in addition to being back from the dead, now can make endless copies of himself. Much as I loved Hugo Weaving's bad guy from the first movie, his presence here strikes me as one of the key problems with The Matrix Reloaded.

This second feature in the trilogy really needed a new primary antagonist who could embody this movies specific themes and ideas.  Rehashing Agent Smith again could have worked if he managed to reinforce a primary thematic concept in the story or something on that level, but as a foe he really doesn't add much to the movie on a thematic level at all. And action scenes depicting endless copies of Agent Smith attacking Neo and Morpheus get really old really fast. Speaking of things that don't work, The Matrix Reloaded ends with a cliffhanger that basically makes the whole enterprise feel empty and meaningless. One can tell that they're going for an Empire Strikes Back-esque somber conclusion, but it just leaves the movie without its own definitive end to its already scattershot storytelling. I have a strong suspicion that the green text at the very declaring "TO BE CONCLUDED" was greeted with boo's and indignation by many upon its initial theatrical release.

Much goes wrong in The Matrix Reloaded, but let it not be said that there aren't positive aspects of the production. It all looks very nice (even if there's a surprisingly large number of examples of 2003-era CGI technology not quite catching up to the imagination of the screenwriters) and the cast is giving it their all, no doubt about it. But the various elements that really worked like gangbusters in the first movie (More philosophy! More action! More Hugo Weaving!) don't gel as well together once their presence is increased exponentially and the few new ideas and concepts introduced here don't have any room to flourish.
Posted by Douglas Laman (NerdInTheBasement) at 1:56 PM

Email ThisBlogThis!Share to TwitterShare to FacebookShare to Pinterest
Labels: Classic Write-Up, Keanu Reeves, May 2003, Movie Review, The Matrix, The Matrix Reloaded, The Wachowskis