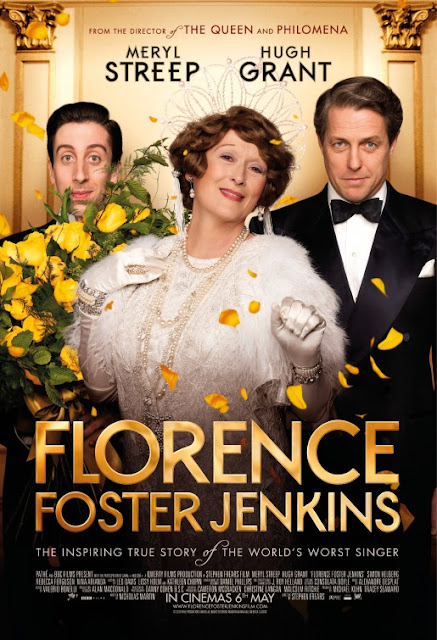 It's pretty clear that Florence Foster Jenkins wants to be the new watermark for inspirational cinema, the kind of film that's a feel-good adventure that inspires individuals to embrace their own talents and not let the obstacles of the world get in their way. A noble artistic goal, but one that's distinctly at odds with the true-ish story it's presenting that concerns a woman named Florence Foster Jenkins (Meryl Streep) who has dreams of singing in super public places, despite her vocal talent not being the best around.

Florence is unaware of her vocal issues and everyone around her, including her husband, St. Clair Bayfield (Hugh Grant), refuses to tell her the truth about her singing ability, instead having her believe she's a musical prodigy. Soon, Florence is performing for people (some of whom mock her openly) and even creates a recording of her singing and sends it out to a high-profile radio station. As her presence expands, St. Clair Bayfield grows concerned all of this excitement might end up being too much for Florence since the woman's multi-decade long bout with Syphilis has left her vulnerable to high levels of excitement.

Conceptually, the life of Florence Foster Jenkins sounds like a fool-proof recipe for an inspirational film, but there's darker elements constantly peeking around this tale that constantly threaten to derail this movie entirely. For instance, St. Clair Bayfield is cheating on Florence (who, lest we forget, is suffering from a life-threatening disease) with a woman named Kathleen (Rebecca Ferguson), a detail that the story overtly treats as, at worst, mildly concerning, if even that. A more tonally nuanced movie likely could have handled this facet of Bayfield's character in a remotely effective manner, but playing things in such a light-hearted manner means this plot point just sticks out like a sore thumb.

It's hard to become involve with Clair as a character depicted in this movie when he's so selfish while the film seems oddly unaware of how selfish he's acting, though at least Hugh Grant gives probably the best performance of the movie in this role. Yes, that means Grant gives a better turn than Meryl Streep, who actually doesn't have all that much to do in the movie. Much of the movie is actually told through the perspective of either Clair or pianist Cosme McMoon (Simon Helberg, who couldn't be more meek in his performance if he tried), which means the character this entire movie is centered on feels oddly sidelined from a thematic perspective.

There are very few moments in the story where we, the audience, get to see things from Florence's perspective or understand what she's going through in her desire to use her remaining years on this Earth to pursue a career as a singer, and by proxy, Meryl Streep has basically nothing to work with on an acting level. What a waste of one of the silver screen's greatest talents. On a more upbeat note, the production values of the movie are at least solid, especially in how the nice-looking attire, automobiles and other notable visual aspects of the 1940's are replicated.

Perhaps the element of Florence Foster Jenkins that truly stands out as a foible is the handling of the titular characters vocal ability. The movie ricochets from treating Florence's singing voice as a source of comedy (with a weirdly mean-spirited edge) and then the very next scene the act of people laughing at Florence is depicted as an atrocity the audience should practically "boo"-ing. It feels akin to if a classic Looney Tunes cartoon played off the act of Daffy Duck getting his beak shot off by Elmer Fudd as purely comedic slapstick in one scene and just five minutes later played off the same act as Daffy suffering a grave injury. Tonally, it's all-over-the-map and doesn't fit at all with the sugary sweet vibe Florence Foster Jenkins wants to project.
Posted by Douglas Laman (NerdInTheBasement) at 11:13 AM