Kubo And The Two Strings Is A Majestic And Beautiful Adventure 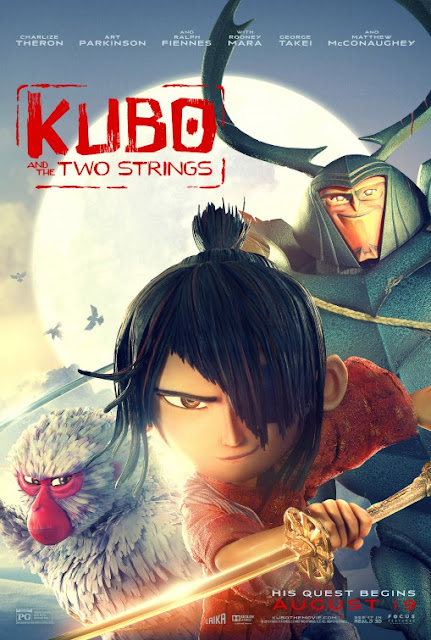 Boy, if you're a movie loving youngster right now, or someone that just likes good cinema, you've basically hit the jackpot this month. Each of the first three weeks of this month have managed to deliver a noteworthy family film that's managed to not treat younger audiences like morons and has decided that families deserve strong storytelling too. The presence of such films makes the existence of Nine Lives (which was also released this month) somewhat more tolerable, I guess. The newest motion picture in this trend of high-quality August 2016 family movies is Kubo And The Two Strings which also happens to be the newest film from animation studio LAIKA, the place where Coraline and ParaNorman originated.

Kubo And the Two Strings is a tale set in an unspecified time long ago in the far East where a boy named Kubo (Art Parkinson) lives a solitary existence with his mother in an attempt to evade the attention of Kubo's grandfather, the nefarious Moon King (Ralph Fiennes). Kubo and his mother are able to live a peaceful enough existence out for a long while...but such peace cannot last forever and soon Kubo is pursued by the Moon King's fiercest warriors, a duo called The Sisters (Rooney Mara). To survive such a menace, Kubo's only hope lies in a legendary suit of armor now that he's been separated from his mother. To find said suit of armor, he's gonna need the help of the stern Monkey (Charlize Theron) and the scatter-brained Beetle (Matthew McConaughey).

Something that really sticks out in Kubo And The Two Strings is how unafraid it is to wade into darker plot elements to hugely successful results. The presence of darker material itself isn't always a net positive in cinema, but here, the willingness to have Kubo encounter actual peril and loss in his adventure helps accentuate the prevailing theme of loss that both Kubo and the story itself grapple with. That also makes characters like The Sisters have actual menace when they're on-screen, the danger Kubo and his friends are in when these two freaky creations show up is palpable.

Similarly, the undercurrent of darkness in the movies aesthetic that boosts the storytelling extends to Kubo himself as a character, namely in his motivation for going on the quest that the entire motion picture is centered on. Kubo is no Chosen One destined for greatness, but rather, a young boy looking for a way to survive against nefarious forces he can't even comprehend. This mystical suit of armor is his ticket to finding some sort of security in a world rife with danger that he now finds himself alone in. Narratively streamlining Kubo's reason for going off on this quest (which entails eschewing well-worn storytelling territory like the aforementioned Chosen One trope) so that it works in tandem with the darker nature of the world of Kubo And The Two Strings is a smart decision and one that pays off thematically in spades.

For those concerned this sounds like one endlessly somber feature film, fear not, there's plenty of beauty and spectacle to be found, most notably in the animation which really does redefine what's possible in the art form of stop-motion animation. A wide variety of gorgeous looking backdrops are crafted with an incredible sense of detail while the character of Monkey is a break away from past stop-motion animal characters like Gromit or Sparky from Frankeweenie in that she actually has individual hairs on her body to replicate the furry look of real-life primates. I'm sure handling each of those hairs was a hassle to animate but it lends Monkey a unique visual look that's just one of the many ways Kubo And The Two Strings raises the bar for this format of storytelling.

Here's how good Kubo And The Two Strings is; it even makes stunt celebrity voice-overs work. The various A-list actors hired to play these characters actually work exceedingly well, especially Charlize Theron as the stern but caring Monkey. Matthew McConaughey, playing the comic relief character of Beetle, gets saddled with a few jokes that don't quite land since they seem to exist simply for the sake of having jokes in certain parts of the story, but those humor-related clunkers are few and far between. Mostly, McConaughey does a splendid job shedding that Southern twang of his to play a warm and instantly lovable individual whose naivety provides plenty of successful gags.

After a summer overstuffed with lackluster blockbusters that seemingly haven't even heard of the concept of proper choreography or staging for action sequences, it's a welcome surprise how exceptional the various action scenes in Kubo And The Two Strings are, especially considering how much said action-packed scenes rely as much on well-developed characters as they do on thrills. Allow me to cut to the chase here and say, after all of this praise, that Kubo And The Two Strings is both another major artistic victory for LAIKA and a samurai tale that's jam-packed with the kind of thoughtful storytelling many movies in general, let alone normal American animated family films, forego entirely.
Posted by Douglas Laman (NerdInTheBasement) at 9:10 AM