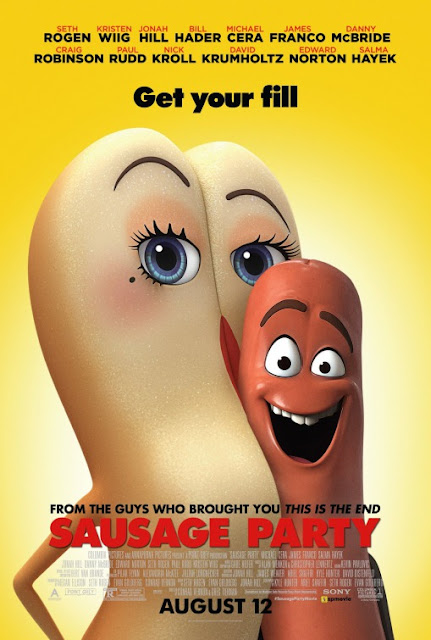 Back in 1989, The Simpsons was thought of as revolutionary for its concept of merging animation with more adult-oriented storylines and jokes. Now, for my generation, the idea of adult-skewing animation existing in American pop culture is normal thanks to high-profile TV shows like Family Guy, South Park, Rick & Morty and Bojack Horseman. Considering how prevalent adult-orient animation is on the small screen, it was really only a matter of time until we got a major American computer-animated movie aimed at adults (following the footsteps of countless Japanese animated movies and other American works like 9 and Fritz The Cat). Such a time has now come thanks to Seth Rogen and his cohorts who have created Sausage Party, a full-fledged parody of the works of PIXAR.

Sausage Party opens with a revelation; your food is alive. Yep, every slice of bread or piece of fruit you consume has feelings, a personality, all that good stuff. We're further told that all of the food at a local supermarket believe in the idea that when people (whom the food refer to as "Gods") purchase you, you go somewhere called The Great Beyond, a place of harmony and joy. All Frank (Seth Rogen), a sausage, wants to do is go to The Great Beyond with the bun of his dreams, Brenda (Kristen Wiig), but such ambitions are halted when both Frank and Brenda find themselves separated from their packaging and lost in the grocery store.

To boot, Frank is quickly learning that the Gods he and all of the other denizens of this grocery store worship may not be as friendly as they appear to be. Reading over this brief plot summary (which doesn't even scratch the surface of this movie enormous supporting cast that includes a character named Douche voiced by Nick Kroll), it's apparent that Sausage Party carries heavy theological ideas in its story, which not only lend the movie some deeper depth to its plot but also help its world feel all the more real and lived-in. It's quite apparent screenwriters Seth Rogen and Evan Goldberg have put a disturbingly large amount of work into the inner machinations of this universe of foul-mouthed food products and the overt theological overtones of the plot is a byproduct of said work.

With that being said, it's actually surprising, with that level of thought going into the universe of Sausage Party, that the movie has a number of jokes whose sole purpose seems to be the dissonance of F-words and sexually lewd phrases being said in the confines of an animated environment. But like I said earlier there's tons of raunchy animated TV shows like Family Guy or Rick & Morty who are already doing this same schtick, so the gags in Sausage Party whose sole purpose is the shock factor of hearing raunchy dialogue in an animated movie lose some of their sting. That being said, there are still plenty of jokes that do work, some like gangbusters, namely the interactions between a bagel named Sammy Bagel Jr. (voiced by three-time Academy Award nominee Edward Norton) and Lavash (David Krumholtz).

Actually, the voice work all around is pretty strong. Seth Rogen and his troop of regular comedic co-stars have been doing frequent voice-work for American animated family movies for about a decade now (Rogen's first theatrical voice-over work was in Shrek The Third in 2007), so they've become pretty adept at it after all this time which serves Sausage Party quite well. The best voice-acting of the bunch, aside from the aforementioned work from Norton and Krumholtz, may be Michael Cera as a plucky little physically deformed sausage who dreams of having pop-pop in the attic with a bun.

Sausage Party, kind of like fellow "R-rated-take on-conventionally-more-family-friendly-genre-fare" Deadpool from earlier this year, isn't quite as shockingly unprecedented as it thinks it is (just as there had been plenty of R-rated superhero movies prior to Deadpool, there have been numerous R-rated animated movies in the past), but it's still a pretty damn funny movie that's got a great voice cast, plenty of jokes that work and even has some nice homages to various hallmarks of the artform of animation such as giving all of the various food items white Mickey Mouse gloves to wear or having Alan Menken (yes, that Alan Menken) pen a musical number that opens the movie. And it's very much worth mentioning that the last twenty-ish minutes of this movie is basically pure insanity that kind of has to be seen to be believed. I'm sure many will think that's hyperbole, but seriously, this thing just goes crazy in its climax simply by takings its premise of "what if food was alive?" to its most bonkers apex.
Posted by Douglas Laman (NerdInTheBasement) at 10:41 AM