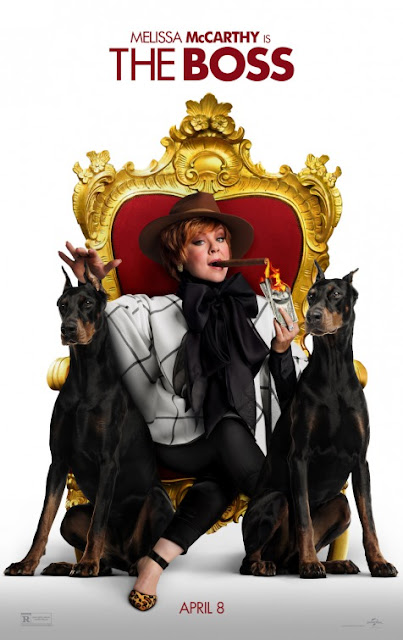 If Paul Feig is seemingly the best filmmaker for Melissa McCarthy to work (judging by their super great track record of Spy and Ghostbusters), then Ben Falcone may be the nadir of directors McCarthy has worked with, namely because Falcone directed Tammy, the absolute worst comedy of McCarthy's career. She and Falcone (who is Melissa McCarthy's real-life husband) reunite for The Boss, a new comedy that can be rightfully praised as a step up from Tammy...and that's about it.

Michelle Darnell (Melissa McCarthy) is one of the richest people on the planet, loaded with cash and a brash personality meant to ward off anyone who dares try to get close to her. But all good things must come to an end and Darnell is soon arrested for insider trading, setting her back to square one financially. She ends up crashing on the couch of her former assistant, Claire (Kristen Bell), a location where she ends up getting a brilliant idea; she'll rise back to the top of the financial world by selling Claire's delicious brownies in a Girl Scout-esque group.

The Boss feels like a waste in many ways, but none more so than in its vast amount of wasted potential for good comedy. There's a couple of light chuckles to be had, for sure, which at least makes it an improvement over the comedic wasteland that was Tammy. But as a whole, the movie is seriously lacking in heavy-duty laughs, especially in its climax (which is the absolute nadir of the movie by a long shot) that weirdly doesn't even attempt jokes for the most part. It's fairly obvious that Michelle Darnell could have been an excellent character to use to go whole hog into some truly dark comedy, but Darnell's "off-putting" tendencies begin and end with McCarthy constantly delivering perfunctory profound profanity.

No one in the supporting cast is all that memorable either, leaving the likes of Kristen Bell (how many comedies this year are gonna waste this poor woman??), Cecily Strong and Kristen Schaal with really nothing of note to do. Peter Dinklage also surfaces as a business rival and jilted lover of Michelle Darnell, but he vanishes from the movie for such long stretches of time that I totally forgot he was even in this movie at one point. You'd think with that roster of super talented people at your disposal The Boss would be able to come up with a ton of good gags, but nope, The Boss instead sorely misses the mark in terms of comedy, which is kind of important for a movie whose whole purpose is to deliver jokes.

Even the banal plot of this movie doesn't seem to have the energy to be truly bad or narratively incoherent, it's instead just shuffling from one trite plot point to another with all the pizzazz of a funeral pole bearer. Would you believe me if I told you that maybe Michelle Darnell's self-serving personality melts in the face of the kindness of Claire and her daughter? Whoops, sorry, should have had a spoiler alert for that unforeseeable plot point. Honestly, The Boss is more bland and forgettable than outright bad (I've certainly seen worse comedies this year) but moviegoers who understandably enjoy Melissa McCarthy and the actor herself deserve far better than a movie like The Boss that's so predictabel and lacking laughs.
Posted by Douglas Laman (NerdInTheBasement) at 7:59 AM