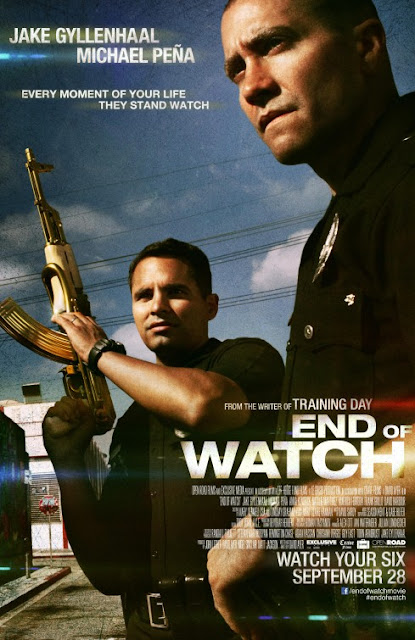 Me and the works of David Ayer haven't really gotten along up to this point. The two films I've seen from Mr. Ayer are....well, flat-out messes, honestly. Fury is a confused movie that wants to be a deep introspection on how brutal war is and then turns into a video game at the end. Suicide Squad is an out-and-out disaster, though that one I blame less on Ayer since the studio meddling on that one is so obvious and immense it's hard to tell where his influence begins and ends. So imagine my shock at finding End Of Watch to actually be quite a strong movie, a character-focused action film with two top-notch lead performances.

Brian (Jake Gyllenhaal) and Mike (Michael Pena) are dedicated cops and best pals who love their job, their friends and family and each other. To my surprise, much of the film takes a cue from the work of Richard Linklater of all things by mainly concentrating on the rapport between Brian and Mike and their daily activities as a cop. It takes until the last half-hour or so where a more concrete plot thread (which involves the head of a dangerous cartel ordering a hit on Brian and Mike for interfering in his business) enters the picture.

But before that, End Of Watch is a character-oriented piece about two guys and their friendship whilst working in the dangerous occupation of being a police officer. Allowing this duo to just bounce off each other for much of the running time lends the gunfire heavy and intensely filmed climax some actual weight. David Ayer's script does a fine job of creating believable dialogue (a notable virtue given that the movie is done in a found-footage style of filming, which I'll talk about more in a bit) that the two lead actors deliver in a similarly high-quality fashion.

Jake Gyllenhaal has been on a freaking roll these past five years, starting with his lead turn in the excellent Source Code and even managing to turn in a solid performance in the mess that was Southpaw. The amount of versatility in the parts he's played over the last half-decade truly is remarkable and playing Brian in End Of Watch allows him to stretch his acting muscles even more, playing an everyman whose determined to uphold the law in his job. With not one shred of hair on his scalp, Gyllenhaal is quite riveting and the same goes for Michael Pena, with whom Gyllenhaal has incredible chemistry. The duo's conversation have a rhythm to them that makes it totally believable that these guys would be pals and the two actors dynamic is a primary reason why this movie manages to excel on an emotional like it does.

Something interesting to note is that End Of Watch technically qualifies as a found-footage movie. Brian is filming much of the movies events through handheld cameras or tiny cameras that he attaches to shirt pockets on himself and Mike. At first, the movie calls attention to this gimmick (namely by other police officers saying stuff like "Why are holding that camera?") so often it distracts from the story, especially since it leads one to wonder how certain shots or angles (that would have been impossible for the characters in the story to obtain) were achieved.

Luckily, they soon calm down with the pervasive references to the found-footage method and just allow  the characters to flow, which is really where End Of Watch manages to prosper anyhow. End Of Watch certainly took me by surprise, I must say as a character-driven cop action movie that serves as a soolid showcase for the talents of its two lead actors and writer/director David Ayer. Also surprising? The presence of Anna Kendrick in here as Brian's girlfriend! I had no clue she was in this movie, so imagine my utter surprise when she appeared on-screen!
Posted by Douglas Laman (NerdInTheBasement) at 9:20 AM