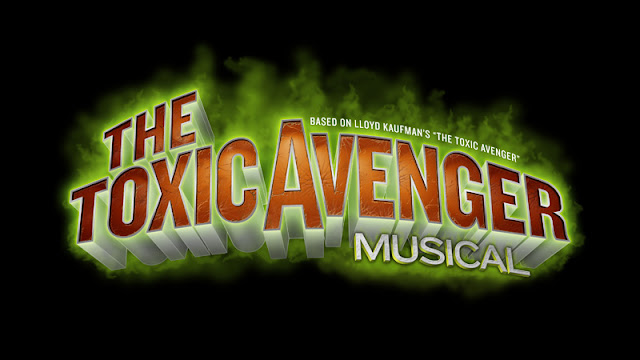 The Toxic Avenger is a musical currently being performed by the Uptown Plays at the Kalita Humphreys Theater in Dallas, Texas from August 27, 2016 through September 11, 2016. This review covers the opening night performance given on August 27, 2016.

Many of Broadway's biggest musicals have been based on motion pictures, most notably adaptations of animated Hairspray and Beauty And The Beast. Following in the tradition of said movies is The Toxic Avenger, a musical adaptation of a well-known 1980's B-movie (a film I have not seen, for full disclosure) that debuted in New Brunswick, New Jersey in 2008. And in terms of Broadway musical adaptations of notable Hollywood movies, it's overall quality is closer to Bullets Over Broadway than The Lion King.

Melvin Ferd The Third (John Campione) is your quintessential 1980's version of a geek, one who lives in Tromaville, New Jersey (I see what you did there!), hates confrontations and pines  for a pretty blind girl named Sarah (Katie Porterfield). When Melvin discovers that the Mayor of his city (Sara Shelby-Martin) is the one dumping barrels of toxic waste all over the place, he is promptly dumped into a barrel of toxic waste by two of the Mayors goons. Left for dead, he promptly arises from the barrel of toxic waste as a deformed monster that is soon nicknamed Toxie and suddenly possessed with strength as notable as his odor. Now he has a second chance to be the perfect man for Sarah and maybe even save his city from that nefarious mayor.

The Toxic Avenger is a zany production, there's no denying that. It wants to be as gonzo as you can imagine, swerving back and forth from sexually explicit dialogue (though, interestingly, nothing in the show is as filthy as the far funnier and more brilliant Broadway musical Avenue Q) to ultra-violence to even trying to make the romance between Toxie and Sarah something the audience should invest in. It tries to do so much in such a hyperactive manner that very little of what it attempts to execute actually manages to coalesce into something truly entertaining.

The humor of the show is the primary problem, especially the numerous "humorous" lines of dialogue that either just fall completely flat (the line "Foiled by my laundry!" is not inherently funny, shocker) or make pop culture references that would have been out of date back when the show originally debuted in 2008. Hope you enjoy references to mid-2000's pop culture hallmarks like Hurricane Katrina, Oprah Winfrey saying "You get a car! You get a car! You get a car!" and Glenn Beck, because they're all here instead of actual jokes. The show becomes so desperate for something, anything, to get a laugh out of its audience that it even has Toxie don a Phantom Of The Opera mask in a climactic chase scene for no reason. There's nothing else to this joke beyond "Look! Something you recognize!" and it's just one of the more blatant signs that this programs humor is scraping the bottom of the barrel in terms of its gags. The only pop culture reference that really lands is a cop (played by Clint Gilbert, who plays a sundry of different roles in the play) is an explicit reference to Kronk giving himself theme music (right down to mimicking Kronk pressing his body against a wall) in The Emperor's New Groove, partly because it's more subdued in its execution than other pop culture references in the show and also because it's fascinating to see that 2000 animated Disney movie referenced in a major theater production.

As for the musical numbers (which have lyrics written by David Bryan and Joe DiPietro), they're a mostly forgettable batch of tunes, hindered by lyrics that are mostly repetitive more than anything else. Toxie's first musical number when he emerges from that fateful barrel of toxic waste is a song simply titled Kick Your Ass, which primarily consists of him repeating that three-word phrase as he violently pummels the two individuals who dunked him in the barrel of toxic waste. Not only are the lyrics monotonous (there are so many fun words they could use to rhyme with ass instead of just saying ass over and over again!), but the show seems to think the very sight of Toxie ripping out dudes spines will provide enough shock value to excuse the dire lack of inventiveness going on in the lyrics.

That's not to say there aren't positive aspects in The Toxic Avenger, especially in regards to the set design which has the majority of sets in the program (including a library bookshelf) be made out of barrels of toxic waste.  It's also worth noting that the five actors in this production certainly throw their all into this musical, particularlyJohn Campione, who gets major props for managing to walk around, much less belt out musical numbers, in the bulky Toxic Avenger costume and Katie Porterfield, whose got spunk to spare in her performance and is particularly adept at hitting the high notes during her musical numbers. Actually, she gets the one musical number in this show that really fires on all cylinders for me, My Big French Boyfriend, which struck me as something like a more sexually-fueled version of Helpless from Hamilton. It's the sort of musical number that shows what could have happened if The Toxic Avenger had puts its energetic spirit to use on consistently funnier and more creative material.
Posted by Douglas Laman (NerdInTheBasement) at 8:31 PM