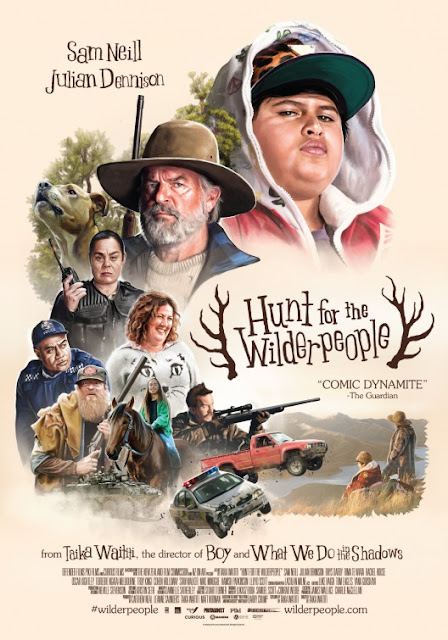 A trend I'm seeing a lot in modern day comedies is a lack of real visual inventiveness. For some reason, the likes of Get Hard and Bad Moms are just so rote in terms of their overall cinematography and visual aesthetic. And then, like a noble Knight riding over the hill to save villagers in distress, comes Taika Waititi's Hunt For The Wilderpeople, which has plenty of visual flourishes to speak of. There's actual thought put into the block and placement of characters in individual scenes, craft has gone into the shot compositions, what is with this level of care going into this production??

Thankfully, Taika Waititi seems to realize the obvious, that the visual look of your comedy can inform the comedy itself if done right. Plenty of laughs are drawn just from sight gags and the like and it is really astonishing to see such visual adroitness play such a prominent role in Hunt For The Wilderpeople, perhaps one of this summer's most joyous and entertaining movies. This is the tale of Ricky (Julian Dennison), a troubled 15-year-old who seems to have found a home with the kindly Aunt Bella (Rima Ta Wiata) and her far more reserved and crotchety husband, Uncle Hector (Sam Neill, a man who was unaware, until I saw this movie, hailed from New Zealand).

However, tragedy strikes this family soon enough and Child Welfare Services soon inform Ricky that they'll be taking him to a Juvenile detention center since there are no other families in line to adopt him. Such a fate sounds horrendous to Ricky so the kid runs off into the woods, with Uncle Hector in hot pursuit. The two soon find themselves separated from society and forced to work together. The two having to co-operate under such unusual circumstances leads to plenty of memorable comedy, namely out of  the grouchy Sam Neill (who can conjure up a chuckle just from his facial expressions) being forced to bounce off Ricky and his more exuberant and "gangster" (as Ricky likes to call himself) personality.

It's an oddball pairing that Hunt For The Wilderpeople manages to work into comedic gold and the duo also manage to create some truly heartwarming moments. Similar to how Waititi's last film, What We Do In the Shadows, treated its lead vampire characters, Hunt For The Wilderpeople loves its lead characters and wants its viewers to be enamored with them in a similar fashion. The story here goes through great strides to show how Ricky and Uncle Hector are two individuals that society has cast off and being so separated from the norm allows them to come together despite their blatant differences. It's an emotionally potent idea the film handles beautifully and subtly, incorporating humanity into characters who could have become one-note stereotypes in lesser hands. For instance, there's a moment early on where, out in the wilderness, Uncle Hector is doodling a sketch of his beloved Aunt Bella. No dialogue is spoken here, but seeing him do this action shows what kind of grief Uncle Hector is going through in his mind and how he's coping with it.

That may be the asset that separates Hunt For The Wilderpeople from the pack, its slavish devotion to its characters and exploring them as people and having the comedy unfold from said exploration. Something else helping these characters come to such vibrant life is the performance from Julain Dennison and Sam Neill. Julian Dennison has some sharp comic timing and he comes off as quite natural in his performance. Meanwhile, Sam Neill makes for a great foil to Dennison's character, with even the tiniest of his hand gestures commanding years of weariness.

Those two are so much fun to watch and it's great that Hunt For the Wilderpeople recognizes the strength of these two characters and performances since it rests much of the story on the shoulder of these two. A wise decision that pays off in spades. Hunt For The Wilderpeople kind of has it all. It's got great lead performances, excellent directing, an adorable pit bull named Tupac, the new benchmark in cinema for how to deliver the line "SHIT JUST GOT REAL!" and so much more. It may sound cliche, but screw it, Hunt For The Wilderpeople left me with my heart warmed and a pervasive sense of happiness that more than put a skip in my step.
Posted by Douglas Laman (NerdInTheBasement) at 4:01 PM