Nine Lives Is Not The Cats Meow 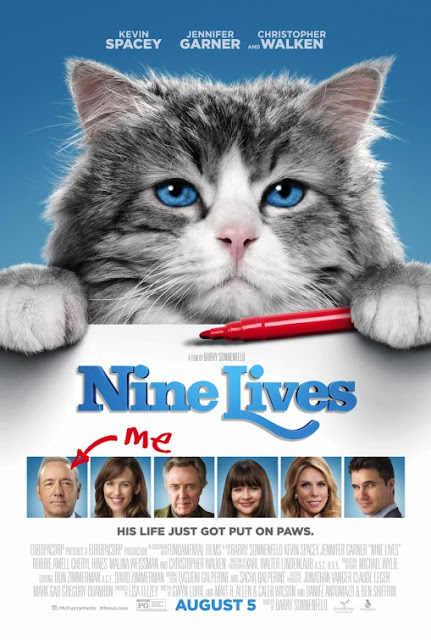 Film academics across the planet are well aware of Nine Lives, the 1963 motion picture directed by Francois Truffaut that proved to be one of the defining movies of the French New Wave. The film serves as an examination of certain social status quos of young French individuals in this era, with modern day interpretations of the motion picture feeling that...nah, actually, Nine Lives is a kids movie from Barry Sonnenfeld that was released just this past Friday that's about Kevin Spacey being turned into a cat.

Like most movies aimed at children, Nine Lives opens with extended sequences dealing with corporate espionage and business meetings. These tedious scenes are supposed to establish that Tom Brand is a business man who knows his way around the corporate world...but never makes time for his family, which also includes his wife Lara (Jennifer Garner) and daughter Rebecca (Malina Weissman). While Tom is on his way home from purchasing a cat for his daughters birthday, he falls off of a giant skyscraper and wakes up in the body of the cat, named Mr. Fuzzypants, that he picked up for his daughter. Now he must learn to be a better dad or he'll be stuck in the cats body forever.

For a movie with such an odd premise (though one with some form of precedence in family films given that The Shaggy Dog did this exact story with a canine in place of a feline), you'd think Nine Lives would be a barrage of weirdness, but instead it's a monotonous slog that would have had me checking my watch if I worse such device.  Otherwise, Nine Lives sticks right to the formula of what I'm sure Hollywood executives (or in this case, French studio executives since this movie hails from French movie studio EuropaCorp) think a family movie should entail. Supposed "heart-warming" moments just sort of happen regardless of if the plot has built up to said heart-tugging moments in any way shape or form. Hell, Tom's big epiphany on the value of being a good father comes when he just bats a balloon around with his daughter.

The movies even worse when it comes to humor, with much of the laughs coming in the form of Kevin Spacey (who provides his voice to the thoughts of Mr. Fuzzypants) delivering "hilarious" quips that wouldn't pass muster in a subpar episode of The Big Bang Theory. They even have Spacey exclaiming "NAILED IT!" one two separate occasions as if such a line in and of itself is pure comedic gold. The gags are as dull as the pitiful attempts at pathos. Hell, the movie couldn't even have Kevin Spacey turn into a cute cat! Instead of turning into an adorable tabby, the feline that Spacey is trapped in just looks disgruntled and far from adorable whenever he pops up on-screen. If I have to watch a cat for 89 minutes, couldn't the cat be at least adorable? These are the important questions Nine Lives answers in the most wrong-headed way possible.

Something else worth noting is that, likely because cats are harder to train than dogs, anytime Mr. Fuzzypants does anything more complex than just sitting on the floor or walking two steps, a jarringly fake CGI cat is used instead of a real. Said computer-generated feline does not at all fit into the live-action environments and the dismal green-screen work is a similar example of the movies shoddy visual effects work. Between the abysmal CGI work and the overly bright lighting that makes every set in the movie look like it came straight out of a cleaning product commercial, it occurs to me to query why this movie, visually, look more like a Disney Channel sitcom rather than a theatrical movie? Even the direct-to-video Air Bud movies had more polish in their production for Gods sake!

I'm sure at this point you've seen some liver of marketing for Nine Lives and think "How does this exist?" It is kind of baffling that this movie got made, but that's where the movie ends being fascinating, full stop. Nine Lives as a movie is boredom incarnate, so bland it can't even sink to the level of being a truly horrendous piece of family movie cinema. That's maybe the highest praise I can offer this trash, which is so ineptly crafted it manages to make a climax involving Kevin Spacey in cat form trying to stop his son from committing suicide a complete snooze.
Posted by Douglas Laman (NerdInTheBasement) at 9:58 AM