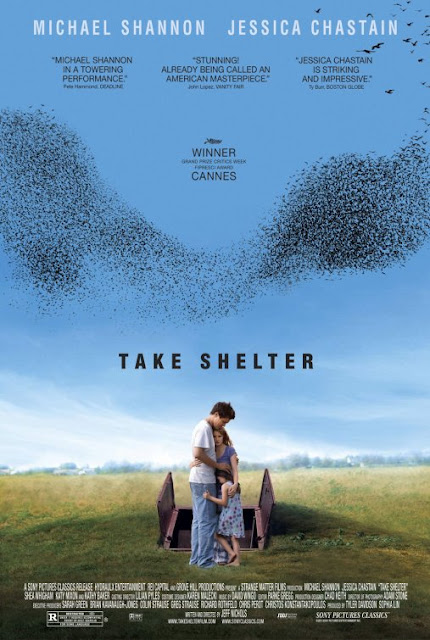 Why hasn't Take Shelter gotten more recognition in the half-a-decade since its release? This 2011 Jeff Nichols movie got super positive reviews upon its initial release, so it's hard to call it "underrated" per se, but it does feel like the film doesn't come up enough in cinema-related conversations, especially when it comes to movies depicting mental illnesses. Then again, maybe I shouldn't be shocked Take Shelter is an underrated motion picture considering it stars two of the most talented yet undervalued actors in Hollywood and is written and directed by a man by the name of Jeff Nichols.

Curtis (Michael Shannon) has a good life. He's a got a dedicated wife, Samantha (Jessica Chastain), a daughter he loves very much and a good job. All seems well in his world, all is tranquil...until he begins having these nightmares night after night, each one depicting vicious things happening to him or his family. These dreams affect Curtis in profound way, with the first, depicting his own dog attacking his arm, leaving him with a feeling of pain in his arm that he can't shake. These visions spur him to renovate his families tornado shelter, so he and his loved ones can be prepared if a storm that frequently appears in his dreams manages to come true.

Slowly during the story, it's revealed that Curtis has a mother whose suffered from dementia for decades, a disorder that sent her into an assisted living center after she left a young Curtis in the car in a grocery store parking lot. This is information the film is in no hurry to divulge, but the script does give plenty of indications that Curtis may be suffering from his own mental disorders prior to the audience getting this revelation about his mother. Similar to Jeff Nichols newest film from earlier this year, Midnight Special, gratuitous expository dialogue is eschewed in favor of letting the characters breathe and having crucial information emerge in a more organic and subdued manner.

Handling the topic of mental illness can be a major pitfall for many movies, especially since the tendency is to use ailments like schizophrenia or dementia as a way to wring dramatic contrivances out of the plot, but Jeff Nicholas script for Take Shelter is honestly extraordinary it how it handles Curtis slowly coming to terms with the idea that he might have inherited his mother's mental disorders. Instead of using his newly discovered mental hindrances as an excuse for superfluous showy over-the-top sequences, the story instead keeps a certain ambiguous nature to Curtis and his plight (is he really enduring the first symptoms of a mental disorder or is there some sort of truth to his visions?) that parallels the complex nature of mental disorders. When our loved ones or even our very selves become plagued with mental illness, there are never easy answers to be found and Take Shelter uses that universal truth to create an atmosphere of intense uncertainty.

When it comes intensity, you couldn't find an actor better suited to depicting that human emotion than Michael Shannon, a man whose made a career out of unearthing humanity in troubled souls. Shannons' commitment to his high-wire intensity driven performances is impressive, but the way he makes Curtis such a lovable everyman at the start of the story (a contrast to his more paranoia-driven persona that will consume him in the rest of the tale) is also a worthy achievement. Shannon takes a cue from the script in getting some extraordinary subtle details to Curtis that make him really click as a character. Plus, going more subdued with the character make Curtis's one tragic scene where he breaks down at a public dinner hit like a ton of bricks and then some.

Playing off Shannon is Jessica Chastain as his wife Samantha, who thankfully isn't just playing a dutiful wife meant to only support her husband but rather a fascinating character in her own right. It's incredible to watch Chastain's character come to terms with her husband's changing mental state, most notably in a denouement scene depicting her trying to convince Curtis that the storm outside has ceased. Two remarkable performances that fit snugly like a bug in a rug in a movie that's similarly remarkable. Maybe it hasn't been talked about as much in the past few years as it should have, but I'll change that right away by saying that Take Shelter is an absolutely phenomenal and gut-wrenching movie.
Posted by Douglas Laman (NerdInTheBasement) at 11:05 AM