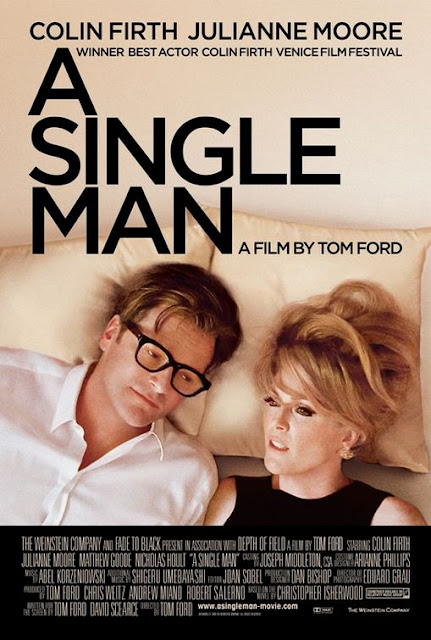 Loss is a universal emotion. There isn't a soul on this Earth who hasn't dealt with losing someone they cared for. Whether that someone was a parent, a lover, a pet, a friend, the sharp emotional pains stemming from their sudden absence in your life is something we all endure. And because so many go through the process of grief after losing someone near and dear to them, there are limitless ways to cope with a tragic loss. Some withdraw from the world, some mask their pain with an endless facade of smiles and chipperness. For George (Colin Firth), he's simply tried to go on with his life in as normal as fashion as possible after the sudden death of Jim (Matthew Goode) a man he's spent over a decade with.

A Single Man follows George on one fateful day where he's decided to take control of his fate; at the end of this seemingly routine day, he will kill himself. And so, we follow George as he goes about his day, going to his job at a local college to teach, interacting with a younger student named Kenny (Nicholas Hoult), being reminded of the past in fits and bursts and spending time with life-long friend Charley (Julianne Moore). His impending demise, and the pervasive sadness consuming him that had led him to this fateful decision, lingers over the entire movie and turns seemingly mundane conversations into emotionally devastating glimpses into George's very soul.

There's a beautiful balance between the overt and the subtle in A Single Man, it's a dichotomy that the movie utilizes in such an incredibly beautiful manner. On the overt side of things, the art direction of this film calls for the majority of the tale to take in place in desaturated environments to reflect the despair consuming George. Similarly, there's a number pieces of editing or cuts that are quick and jagged, recalling the way dreams or fantasies tend to hop from one spot to the next. Since George has become entangled in memories and dreams of the past, it's only appropriate that the way we see his present day situation is in a manner reminiscent of dreams and fantasies themselves.

But there are bursts of happiness in George's life, most notably whenever he is reminded of the more serene past with Jim. Occasionally, something will remind him of events from past or kindness will enter his life and glorious bright colors will seep into the frame. Not only do the colors depicted in the film look lovely, but seeing George experience these fleeting moments of bliss has such a powerful melancholy vibe to it. He and the audience know full well such moments of contentment can't last forever, nothing does. But that doesn't mean one can't enjoy such slices of happiness while they last.

By contrast, the dialogue in A Simple Man is a master course in how to have seemingly simple lines carry tremendous emotional heft. You see, George and the viewer are the only ones to know that this could very well be his last day on Earth, so while George goes about his normal routine, there's an unbearable sadness to every step he takes, every word he speaks. Seemingly mundane compliments he gives people or conversations with he has with other people carry such profoundness to them, but they're not written in a way that makes them stand out as "overly dramatic" or that would call to much attention to George. There's a similar approach to flashback sequences with Jim and George, which are simply the two hanging out and shooting the breeze in a manner more true-to-life.

Such pieces of dialogue or actions are done so that they can work on multiple levels and Colin Firth sells them excellently. The way Firth composes himself in this movie physically alone is a marvel to see, he conveys that he's a broken man barely hanging together as life throws one tragedy after another at him. He takes a cue from the more subtle aspects of the movie in that aspect of his performance and in his turn as George as a whole and it is incredible to watch. There's a great scene towards the start of the movie showing him getting the news that Jim has passed on from a terrible car accident over the phone, all done in a single-take. One-shot scenes like these can come off as gimmicky in some instances, but I didn't even notice that it all took place over a singular shot so powerful was Firth's performance here.

The composure Firth carries in his voice, a sign that he's already trying to mask the pain he constantly carries, juxtaposed against his facial expressions show him coming to realize the great tragedy that has just befallen him, oh Lord, it's heart-breaking to watch. And if you think that sounds emotionally powerful, just you wait until A Single Man gets to the scene where George talks to Kenny in the bar where he met Jim. It's a moment that had me blubbering with tears, there's really no other way to put it. Two individuals, trying to find themselves in different parts of life, with George's possible death lingering over the scene like an ominous storm cloud. It's a magnificent sequence, one that's insanely powerful to watch and it's most certainly not the only part of the movie to carry that kind of emotional heft.

Loss is a not an easy thing to experience. It can be harsh, it can be devastating, it will always linger in our hearts. I absolutely love how A Single Man does not try to bring some schmaltzy moral about how "You can get over loss super easily!" or some other falsehood like that. No, it's more interested in treating those going through the process of loss like the human beings they are. Despondency looms large over George in A Single Man and seeing him just trying to make it through another day while trying to co-exist with pervasive sense of grief in his life is an emotionally harrowing thing to experience. A Single Man carries such an innate understanding about people, life, the process of loss and the importance of connecting with other human beings as well as the tenants of great filmmaking. Put that all together and you got yourself one extraordinary movie
Posted by Douglas Laman (NerdInTheBasement) at 1:04 PM