The Matrix Revolutions Ends Things On An Overstuffed Whimper 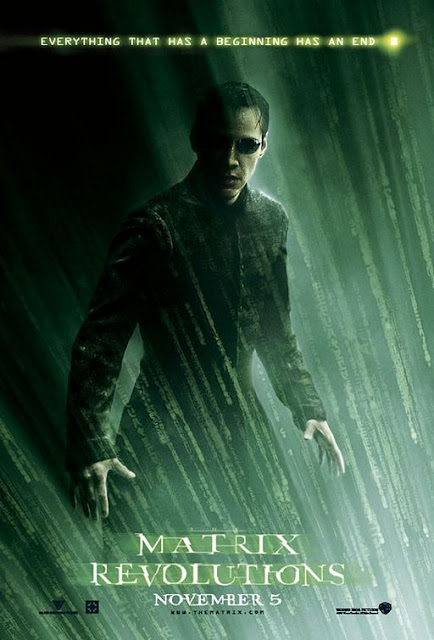 Six months after The Matrix Reloaded disappointed fans worldwide, The Matrix franchise returned for its concluding chapter to middling box office and a largely tepid critical reception. Not until the third Hangover movie a decade later would a third chapter in a franchise have such a steep box office drop off from its predecessors with The Matrix Revolutions failing to match the five-day gross of The Matrix Reloaded in its entire domestic run. That's not exactly shocking information given that this third Matrix adventure is ultimately a mess, though I would put it slightly above the first turgid Matrix sequel in terms of overall quality for what that's worth.

The machines are about to execute a full-fledged attack on Zion and it's up to Neo (Keanu Reeves) to travel to the city of machines to see if peace is possible. It's a simple premise...that for some reason has an extraneous opening mission where Neo is trapped by someone named The Trainmaster in a form of purgatory that takes up nearly forty minutes of the movie for no real reason. Supporting characters you loved from the first movie like Trinity (Carrie-Anne Moss) and Morpheus (Laurence Fishburne) don't do much at all in this installment of the series while Neo is either such in the aforementioned purgatory area or traveling to the Machine City for much of the movie. But don't worry, that character literally just named Kid (Clayton Watson) we briefly met in the second movie becomes a more important character than Morpheus and Trinity in the grand scheme of this story....for some reason.

Taken as a whole, both Matrix sequels form a sort of nexus of poorly developed ideas that don't have much connection to each other. The presence of Agent Smith in the last movie just seemed to be there for the purpose of going "Look! A thing you loved from the first movie!" and this third Matrix film, unfortunately, also has a bunch of poorly constructed ideas. Take, for instance, the Battle Of Zion, where various members of the city fight back against the invading machines. There's some cool imagery in there for sure but human characters we don't know and have been given no set-up fighting a horde of interchangeable CGI robots gets old immediately. It is absolutely bizarre that nobody from the first movie that we've been following for three damn movies is involved in this fight, with instead The Kid abruptly getting upgraded to "leading character" status so he can be a plucky hero who uses one of the mech-suits from Avatar to save the day.

Agent Smith (Hugo Weaving) is kind of back in this movie, though he's now taken over one of the humans, Bane (Ian Bliss) in the real world, a feat he accomplished in The Matrix Reloaded. This could have been a menacing showcase of the power Agent Smith now has, but instead, it only makes our main cast look like idiots since we watch them stumble around trying to figure out the answer to the question "Is Bane really a bad guy?" that the audience has known since one of the opening scenes of the second movie! There's just no tension here and it doesn't help that Agent Smith as Bane doesn't accomplish diddly-squat. Yeah, he blinds Neo, but Neo's so powerful at this point that it doesn't seem to affect in the least. Good on Ian Bliss for mimicking the body gestures and dialogue delivery of Hugo Weaving though.

Neo has a proper run-in with Mr. Smith himself in The Matrix with their massive fight scene serving as the films proper climax. Instead of being entertaining, it mostly feels like a precursor to the Superman/General Zod fight scene that finished off Man Of Steel, in that Neo and Mr. Smith's final confrontation is just an endless serious of uber-powerful CGI characters just punching each other for what seems like an eternity. And then it's resolution comes and you just have to wonder "Why didn't Neo do that from the get-go?". It's a really pitiful way to end both the movie and the trilogy as a whole.

The few elements that do manage to work in The Matrix Revolutions (I actually really like Jada Pinkett Smith in these Matrix sequels even if she doesn't get much to do) are fine, but this is mostly just a clutter of various underdeveloped ideas that don't really go anywhere at all and the fact that it barely does anything with the primary characters of this tirlogy like Morpheus and Trinity is a damn shame. The Matrix is such a great movie and it really deserved more coheisve and interesting follow-up features.
Posted by Douglas Laman (NerdInTheBasement) at 4:53 PM