The Little Prince Beautifully Contemplates Mortality, Friendship And The Nature Of Growing Up 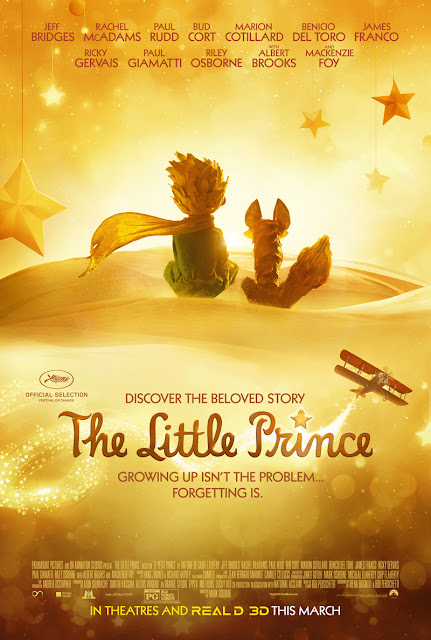 When we're kids, we know, even if it's just subconsciously, that we'll all one day become the very grown-ups, the ones that seem to have to have all answers and tower over us at such a young age. As one grows older and the days and years fly by, it begins to slowly dawn on you that, as the years go by, the inevitable is occurring...you've grown up. It's not an automatic thing, but a gradual one. And you quickly learn that adults, well, they don't have all the answers, no one does. In the words of the father from Calvin & Hobbes: "I don't think I'd have been in such a hurry to reach adulthood if I'd known this whole thing was going to be ad-libbed".

Growing up is not as cut-and-dry of a process as it may originally seem and The Little Prince knows this to an astonishing degree. It's entire emotional crux rests on this emotionally rich idea and it pays off in dividends. The Little Girl (Mackenzie Foy) may be only nine years old, but for her Mother (Rachel McAdams), this means it's the perfect chance for The Little Girl to live her life according to a rigidly designed plan that will make it possible for her to get into the best academy and then have the best life afterwards. This, the usually absent Mother is convinced, will make The Little Girl a wonderful grown-up.

The Little Prince basically feels like a revelation compared to most conventional animated family movies. Pop culture references have no presence here and the same goes for bathroom humor. Instead, it's busy (GASP!) making its characters believable, creating some exceptional animation and crafting emotionally resonant themes that'll work for all ages. It doesn't dare talk down to children and it works equally well as a movie for adults as it does for young 'uns. In short, The Little Prince actually values its audiences intellect, a sharp contrast to the subpar likes of The Secret Life Of Pets or Norm Of The North.

Perhaps the best way The Little Prince deviates from conventional modern day animated family movies is how it doesn't feel the need to constantly fill the screen with just tons of activity and hyperactive content in an effort to replicate the sensation of dangling keys in front of a baby. Instead, the wise script is filled with quite scenes that allow the friendship between The Little Girl and The Aviator to feel as real as possible and such tranquil sequences also help the thematically hefty themes of The Little Prince segments of the story truly resonate. That ability to just let characters simmer is one of the many aspects of The Little Prince that just makes this film feel so emotionally palpable.

To help bring these characters to life is a voice cast packed with A-list talent, but, again, breaking from tradition of conventional celebrity-filled animated fare, the big names in the cast actually fit their characters and turn in exceptional work. This is particularly true for Jeff Bridges in a soulful turn as The Aviator that allows Bridges to bask in vulnerability and a wise temperament. Similarly, a warm performance from Mr. Paul Rudd is a highlight while supporting turns from Rachel McAdams, Albert Brooks and James Franco all stick around in one's memory. Franco, as a fox The Little Prince befriends, is particularly impressive since he manages to shed his public oddball artistic persona to instead inhabit a figure who embodies kindness and the value of friendships between individuals that endure even when said friends are apart.

The Little Prince is also just as much of a visual marvel as is an emotionally stimulating adventure, particularly in The Little Prince segments which use gorgeously rendered stop-motion animation to differentiate this tale from the "real world" that The Little Girl and the Aviator inhabit. Even in the portions of the story that take place outside of The Little Prince tale (which is the majority of the movie), plenty of little touches abound that show a considerable amount of craftsmanship going into this level on even the most intricate level visually. Just the way many of the shots in this movie are composed, like introductory shots of The Aviator that put the viewer directly into the POV of The Little Girl, show a fascinating level of detail that manages to further help the already pretty powerful themes of this movie blossom.

Growing up is not easy. Hell, even when you're an adult, you're still always growing up, we're all still learning new things and growing as people. That's the kind of true-to-life nuance that The Little Prince is good at communicating so frequently. This is a beautiful movie, probably one of the stronger feature films I've seen this year thus far, that bucks a lot of conventions of normal animated family movies all in the name of executing its touching story in the best way possible. Whether you're young or old, The Little Prince is sure to work it magic on you.