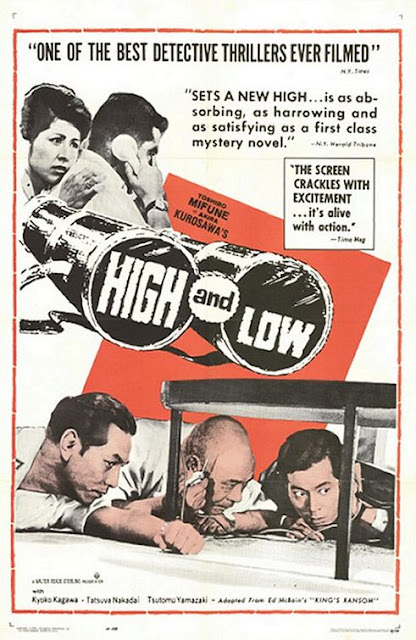 Crime thrillers have been a notable part of the very fabric of cinema for decades upon decades upon decades, so it's no wonder that Akira Kurosawa, a director notable for the versatility in the genres his films inhabits, would eventually dip his toes into this pond of storytelling with High And Low (which, unless I'm horribly mistaken, is not the only crime thriller in his filmography). Reuniting with Toshiro Mifune, the Leonardo DiCaprio to his Martin Scorsese, this is a tale set in then modern-day Japan and revolves around a kidnapping.

In the middle of said kidnapping is Kingo Gondo (Toshiro Mifune), a man whose just put all of his finances on the line so that he can grab more control of the shoe company he's worked for for years. But before he can even execute that big plan, he's alerted on the phone that his son has been kidnapped by a mysterious stranger demanding a large sum of Gondo's fortune, putting both his plans to take over the shoe company and his very financial status into peril. What's more, it turns out that the young boy kidnapped is not Kingo Gondo's son, but rather the offspring of Gondo's chauffeur, Shinichi.

The clock is ticking now as Gondo, with the help of a number of experienced police officers, must figure out how to approach this delicate situation. Gondo is an interesting and different kind of protagonist, very much a three-dimensional human being motivated by the desire to stay on top in the world. Throwing him into the middle of a kidnapping operation tosses that while world-view for a loop, especially as he struggles to decide whether or not to toss away his fortune in exchange for the life of Shinichi. His grappling with this such a quandary is displayed as distinctly selfish action, but there's a smart decision made to not make Gondo too heightened in his self-centered tendencies with Toshiro Mifune going for a more nuanced performance in his take on the character.

This is the fifth Akira Kurosawa film I've seen and every time I watch one of this man's movie I'm constantly astounded at how well his films are when it comes to blocking characters in shots. Like Seven Samurai, there's a large number of shots with crowds in High And Low and anytime a large sum of characters are in a scene together, there's an incredible amount of layers in each individual in the shot. No one's there just for the helluva it, everyone's physical mannerisms, dialogue and facial expressions contribute something to the plot and/or their own character arc. Not an inch of the frame is wasted in an Akira Kurosawa movie and that's amazing to watch.

Something else that becomes clear about Kurosawa's movies on a visual level with High And Low is how well he uses the monochromatic color pattern inherent in shooting a film in black-and-white to create some incredible imagery. There's a scene late in the film where the kidnapper of Shinichi is watching this poor woman bang and claw on a tin wall and the placement of the aforementioned kidnapper juuust far away from the woman to create sense of impending dread combined with the striking color scheme of the scene creates this really unsettling image that's been seared in my brain. There's plenty of notable visuals to go around in High And Low, including the use of bright pink for one scene, the only instance of color in the entire movie.

It must be said that High And Low does falter a bit on a narrative level, namely in the second half of the movie, which primarily concerns the various police officers we've met in the movie trying to track down the nefarious kidnapper of Shinichi. Problem is the audience is already shown who the kidnapper is long before the police realize what's going on and some of the various clues that lead the cops to the kidnapper feel like they're being made up as the movie goes along instead of being organic pay-offs to earlier questions. Nonetheless, High And Low is still good, if not quite as consistent in quality as other Kurosawa productions, that proves that one of cinema's most notable auteurs can equip himself quite well to the world of crime thriller movies.